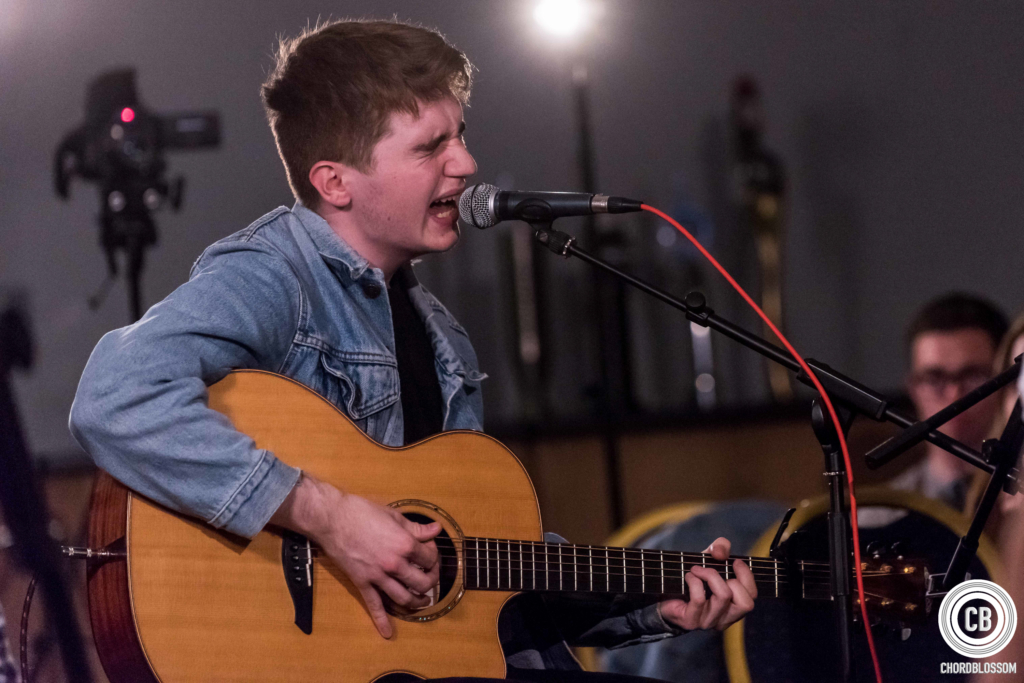 The highlight of a day-long songwriting workshop run by Panarts, Ronan McSorley launched his first EP I Am Not Free, and what a piece of work it is. I had the chance to hear the EP a couple of days beforehand and it is a stunning debut release. There are hints of Portishead’s “Glorybox” in the title track and vocals that sound like a young Damien Rice – but it is the sheer quality of the songs themselves that stand out. It’s no surprise to discover that he has been mentored recently by none other than Cormac Neeson. McSorley beat off fairly stiff competition in 2018 to win the Belfast Nashville Young Songwriters award, and it was that which paved the way for him to record I Am Not Free.

The “in the round” format is not the most obvious way to do a record launch, but that’s what we had tonight, with McSorley joined by two students from Belmont University in Nashville, Kelsey Abbott and Connor Singleton. Abbott takes the first song, and is followed by Singleton. Their songs are well-crafted and both ladies are fine vocalists. Abbot’s voice is rich and emotive; Singleton’s is deeper, maybe just a little bluesier. Abbott’s skills shine on upbeat songs like ‘Liverpool’ and the more introspective ‘June’. Singleton’s songs are little darker and more melancholy but ‘Digging My Own Grave’ stood out and ‘Day By Day’ added a little lightness.

When McSorley’s turn comes around, there is an immediate contrast to the preceding songs; ‘Are You Coming Out Tonight’ is a gorgeous piece of songwriting that has hints of Americana but couldn’t have been written anywhere else other than Belfast. It is gutsy and heartfelt and as McSorley hits the final chord, there is a hushed silence in the room before the audience break into rapturous applause.

McSorley has a very genuine and warm style of engaging with the audience; self-deprecating humour mixed with a little shyness; he listens intently to the other performers and at times seems almost in awe of them. He doesn’t need to be. McSorley jokes that the next song is a sad one, before noting that all his songs are sad songs. ‘Tell Me The Truth’ is indeed a great sad song, full of heartbreak and relationship issues and brought to mind Brian Fallon of Gaslight Anthem’s solo material.

Other tracks are equally as powerful as the opener; ‘All It Took’ has a floating bass line and sliding guitar riffs and ‘Tell Me Now’ (co-written with Jim Johnston) gets an enormous reaction from the crowd. The live version of ‘I’m Not Free’ is a very different beast to the studio track that opens the EP but it loses none of it’s impact with McSorley’s vocals soaring and howling over the acoustic guitar backing.

McSorley finds time for what might be the corniest dad joke ever heard before thanking everyone, including the students from Belmont University and all of his aunties who have come along. To be fair, it looked like his aunties outnumbered the University students. He finishes on a cover of Leonard Cohen’s ‘Hallelujah’ which is included on the EP. Starting a cappella, with Singleton and Abbott providing harmonies, this was a real treat – the kind of performance that gives you goosebumps. McSorley’s slow, measured guitar comes in around the second verse and the crowd are quick to join in on the chorus. Everyone covers ‘Hallelujah’ but McSorley’s delivery and interpretation was totally captivating.

A great live performance to mark the launch of a pretty damn good debut EP. McSorley has a maturity in his songwriting and his performance that belies his relatively young age. His guitar playing is well-judged and diverse but it is his voice which stands out – conveying emotion with tenderness and power and with no artifice or trickery. Genuine, honest songs from a superb new talent on the Northern Irish music scene – listen to the EP and catch him live if you get the chance. You won’t regret it.