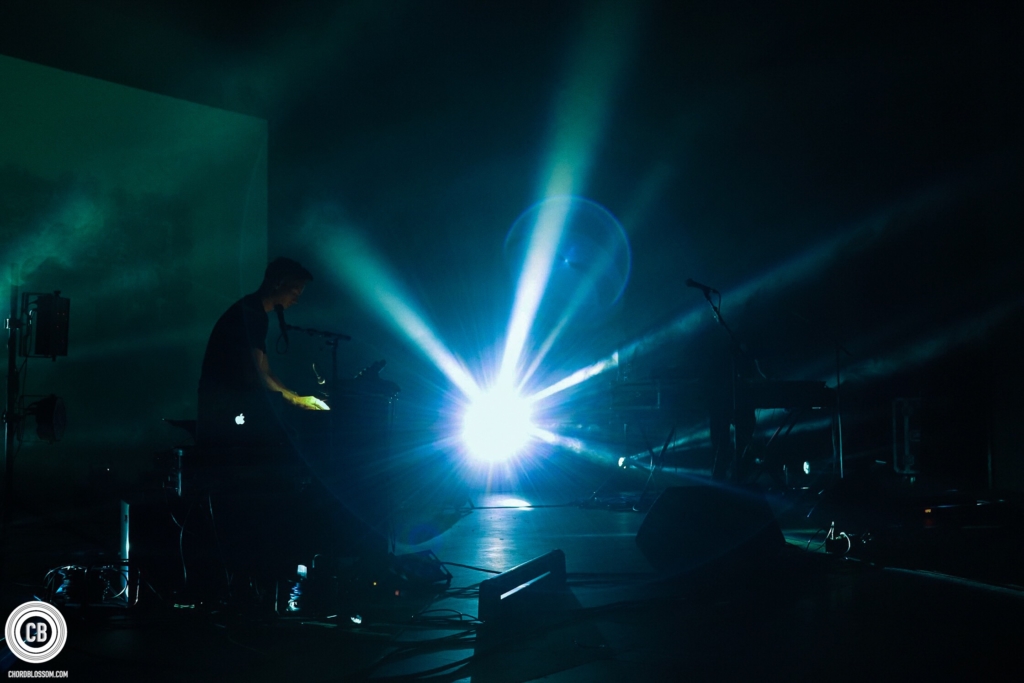 The MAC: Belfast’s premier venue for everything weird, wonderful and left-of-field, from music to theatre and miles further beyond. Enter Ryan Vail and Eoin O’Callaghan aka Elma Orkestra’s turbulent electronic exploration of Irish identity and modern politics ‘Borders’ – the euphoric, reverent live show already hailed as one of Ireland’s “most groundbreaking” live music experiences.

A dramatic layer of fog hung low on the floor of the downstairs auditorium, a strange and almost meta sort of pathetic fallacy in reference to Ireland’s poor weather and dramatic coastal landscapes.

The opening act for the night, Rachael Boyd, a contemporary classical/electronic composer from Belfast, had an immediate hold on the room.

Boyd herself flitted wildly yet effortlessly between her MIDI controller, loop station, violin and pedalboard, creating a whirlwind of fleeting melodies and auditory artefacts. Behind her, a remarkably tight rhythm section composed of Mark O’Connor on bass and Dara Walsh on drums held down the understated late-night grooves of Rachael Boyd’s set, delivering an ethereal mesh of trip-hop and modern classical arrangements. Set highlights included ‘Don’t Be Selfish Now’, which features an incredible string arrangement reminiscent of the score from 28 Days Later and ‘Blindspot’, a dark and lumbering funk jam with swirling layered vocals.

A short intermission filled with mingling, chatter and a few drink refills brought us to the main event – Borders. The album itself is a fully realised and densely detailed concept album of sorts (despite being almost entirely instrumental), its tracks unified not only via the hushed and idiosyncratic compositional styles of each producer, but the clear intention throughout. It would be naive to imply that Ireland is a perfect place to live, but Vail & O’Callgahan were about to prove that, despite its shortcomings past and present, Ireland is a country to be proud of.

The setup was minimal – Vail on one side, O’Callaghan on the other, much like it was for them growing up either side of Derry. O’Callaghan takes shelter behind a large Moog cabinet while Vail is cocooned by an array of sequencers and patch cables, a spoken word introduction waxing philosophical while final adjustments are being made to the gear – “…what does anyone want but to feel a little more free?”.

Warm analogue synthesisers and rich string arrangements filled the room as the pair began to play ‘Arrival’, the first single from the album. Waves of sound and flutters of birdsong accompany striking drone footage of surf crashing violently against rocks, blue slowly turning to white, mirroring the structure of the track itself as soft yet present kick drums are dropped in and out of the mix. Coloured lasers and strobes permeated the smoke, now flowing generously from behind the stage, almost blinding but not enough to make anyone look away – the entire audience locked in to the performance.

At times it struck me how odd it was to be seated at an AVA event, usually much sweatier and involving a lot more jostling and spilled beer, but looking over a crowd seated in quiet reverence with eyes unmoved from the stage added to the borderline magical atmosphere.

The first guest of the evening, Clannad’s Moya Brennan, quickly glided on stage to lend her haunting vocals to the minor key string washes of ‘Colours’, exuding more stage presence than one person should ever be capable of before leaving as quietly as she entered, with no pretence, no false grandeur.

Dublin born spoken word artist Stephen James Smith is next to join the stage for the track ‘My Island’ which features a gut-wrenchingly emotive performance of an original poem, speaking to Ireland’s melting pot population – “This community is Irish and British, which can be hard to distinguish…”, clearly resonating within every soul in the room.

Intricacy and painstaking attention to detail is woven into every second of Borders, evident from simply observing Vail & O’Callaghan move within their on-stage bounds: sequencer step lights run endlessly, parameters shift in constant motion, hyperactive skitters of bikechain percussion and long washes of slowly decaying reverb are triggered, feeding into hypnotic, calculated layers of sound that rarely let up during their nearly hour long set. It takes courage to throw an audience from the weightless strings of ‘Stay’ to the ten-tonne kick drums and growling gated bass of ‘Droves’, but when done with such aplomb as Vail and O’Callaghan, there can be no complaints.

The visual aspect of the show, seemingly treated with as much care as the music, provides stark reminders of Ireland’s impermanence, the ever-changing coastlines and dense, dark forests; co-ordinates on screen highlight critical pieces of infrastructure – petrol stations, coffee shops, farms – all of which have, in some way, aided in and influenced the creation of the Borders project.

‘Borders’ is more than an album, more than a live show – it is the singular most important piece of art to come out of Ireland this year, and a testament to the lock-and-key duo that is Ryan Vail and Elma Orkestra.