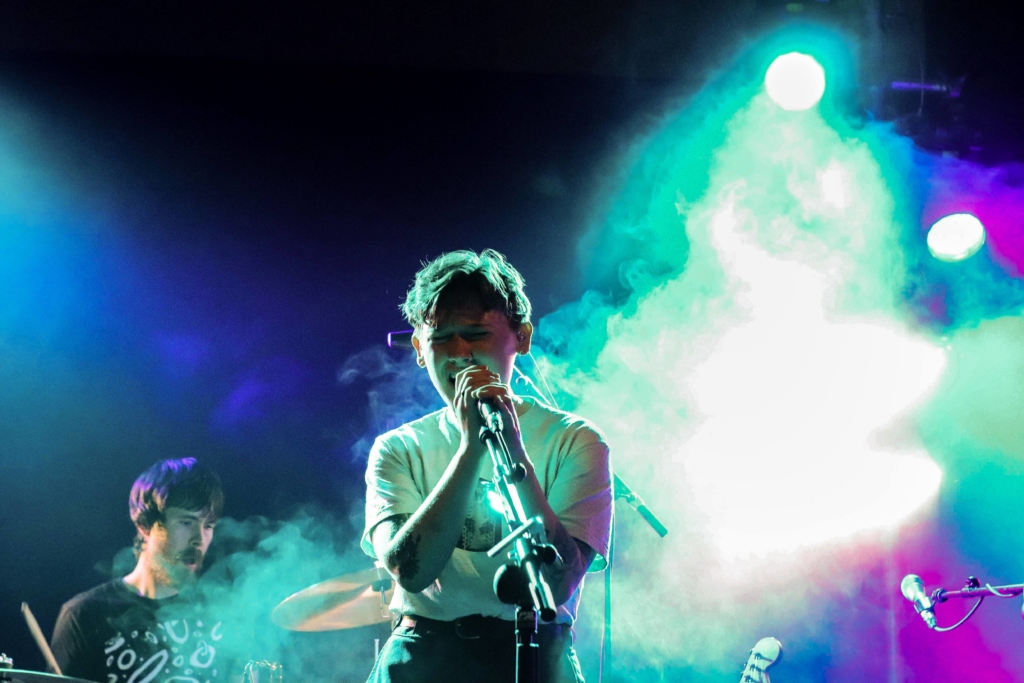 SOAK and Pillow Queens finish their European tour with a date in the headliner’s hometown. The culmination of the tour in The Glassworks as part of the ‘Grim Town’ release seems fitting. SOAK (Bridie Monds-Watson), a Derry native, last played in the same venue close to three years ago, hence the anticipation around the announcement. Curated tonight by MRK Events, the air is alive with frenzied whispers, laughter and expectation.

The evening’s show opens with Pillow Queens’ ‘Puppets’ and from the first note, heads begin to nod in time with the music. The thick Dublin accent of Sarah gives the number an almost eerie edge, and this choice of song to open their set is exactly what is needed to distinguish their skill: the intense vocals that belt lyrics like ‘Now I’m obsessed with dates and anniversaries/ I’d rather put it on hold’ which immediately establish the band as having an honest, direct tone that consequently remains in newer, unreleased songs like ‘Liffey’ and ‘Brothers’. The light-hearted, humorous dialogue between the band between numbers is a delightful addition to their performance.

The effusive reception from the audience following the first song of the night is demonstrative of their appreciation for the band’s unapologetic, raucous presence that undeniably radiates though adrenaline-fuelled songs like ‘Favourite’. At points I feel myself glance toward the ceiling, wondering how it had not been blown off by the highly charged, explosive riffs and tight harmonies featured in songs such as ‘Rats’ from the band’s earlier EP ‘Calm Girls’ and ‘HowDoILook’, which is to feature on their album. Pillow Queens are reminiscent of Derry punk band CHERYM with their authentic, exuberant quality. Just one glance shows the undeniably euphoric crowd.

Pillow Queens close their set with the widely adored anthem, ‘Gay Girls’. I see smiles grow on faces across the audience as I become further immersed in the atmosphere. Bodies begin to dance, celebrating the message and sense of connectivity the number creates.

I notice a young person, just right from front-and-centre, recalling each lyric from Pillow Queen’s set with absolute fearlessness and pure ease. This, to me, epitomises the energy that the Irish band exudes. The four-piece band, consisting of Rachel Lyons, Cathy McGuinness, Pamela Connolly and Sarah Corcoran, has a vibrant and engaging presence that combines with intoxicating lyrics and hooks to form an absolutely stunning result, manifested with a punchy, unshakeable powerhouse of an act that, although not perfect, displays an undeniable and worthy confidence.

It’s absolutely clear that the commotion surrounding the band is not unfounded in any way at all, as proven by the more-than-thrilling performance from the Irish-based alternative band.

As the ‘all aboard’ track speaks its first words, the crowd buzzes, rising to a climax when the Derry native enters into eyeshot climbing the stairs to the stage. ‘Grim Town’, the second album to come from SOAK, released this year, has brought the already-esteemed artist into greater success. This leads directly into ‘Get Set Go Kid’, an upbeat tune that equally allows Bridie to access a more powerful, haunting register live.

‘Knock Me Off My Feet’ initiates wider crowd participation, with many joining in on the more known chorus. The allusions to Derry places gave the song an extra sense of unity through being cast out onto the audience that are the most likely of the tour to understand the niche references. Tommy (McLaughlin)’s short solo energises the crowd further, with many displaying award-winning standing-in-place swaying. The crowd’s reception was a warm, highly positive cheer, showing clear excitement for what was yet to come.

Following the previous album’s more mellow, solemn ‘Blud’ and ‘B a nobody’ comes ‘I Was Blue (Technicolour Too)’ recalling parties in an area just outside of the city. Containing lyrics such as ‘How can I be home and still want to go there?’ that reverberate around the room that creates a long sense of decay, with the more positive mood being hit with a juxtaposing undercurrent of a much more unnerving sense.

Many voices combine in a powerful rendition of the chorus of ‘Déjà vu’, one of the more lively tunes that permits a dance rather than a sway, with James Byrne providing its heartbeat.

SOAK invites Pillow Queens on stage to provide the backing vocals for ‘YBFTBYT’. The song, although already highly-vocally focussed, becomes a more exhilarating performance. Each note is deliberately keyed into each word’s meaning providing the crowd with a painful ballad.

At many points during ‘Crying Your Eyes Out’ there is complete and utter silence. Sophie Galphin, a new addition to the band for this album cycle, effortlessly graces the keys, allowing Bridie to remove the barrier of the guitar to deliver a sincere, heart-wrenching performance. This song highlights SOAK’s ability to write lyrics that have an overpowering, pensive sense of nostalgia and a highly reflective tendency similar to those that helped garner her audience when she was in her early teens. The new, abyssal anxiety reflected in ‘Grim Town’ is undoubtedly transferred into her live set, but not in expected ways. The stillness and awe competed for volume whilst Bridie recited ‘Missed Calls’, creating a poignant sense of comfort in the performance to the city in which she was raised.

Grim Town’s first single, ‘Everybody Loves You’, conjures the loudest audience reaction, being the most well-known number and, strangely enough, the most loved. The repetitive chorus provides an opportunity to simply stand and be engulfed by a wave of emotion.

SOAK’s set closes with ‘Nothing Looks the Same’ in an emotive rendition of the album’s final track. Without a doubt, the rollercoaster of emotions throughout the entire performance ends on a high.