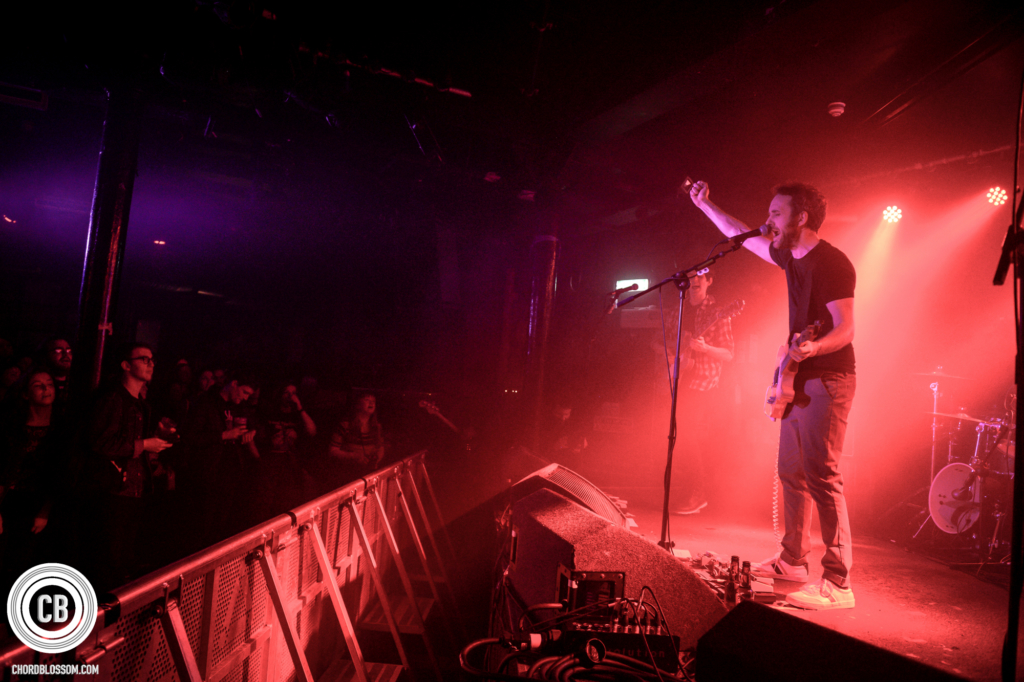 According to the popular smartphone navigation application ‘Google Maps,’ it takes exactly 11 minutes to make your way from the top of Victoria Square’s dome to the doors of Limelight 2. In further proof that machines are not to be trusted my panicked run/jog had the journey completed in 9 minutes and 47 seconds. Up yours Skynet.

There’s a viable reason for my haste, as Limelight played host to the launch party of Mick McCullagh and co’s debut album. You may know them as Son Of The Hound. The much-anticipated release by one of the scene’s better-known faces had nearly 200 tickets pre-sold as both family and fans clamoured to catch the first show by the guitar poppers in several months. I was greeted by a pillow of ash and smoke as I rounded the corner of Adelaide Street into the bustling energy of Limelight 2. Laughter and smiles were bouncing off the wall with reckless abandon. Less of a gig and more like a family event, faces in the crowd were new and yet oddly familiar. Back slaps and hand clasps resound through the room as men and women engaged in the age-old tradition of “it’s your turn to talk when I have my drink to my face.”

Despite my tardiness, I arrived just in time for the opening act. Sister Ghost took the stage amidst a haze of venue smoke. Fronted by the electrifying Shannon Delores O’Neill, their fiery brand of punk rock is a magnetic one. A personality powered set highlighted by visceral, shocking riffs and punctuated by the roar of O’Neill, the group saw to it that their reputation for fierce live gigs was fulfilled. The sizeable crowd shouted their approval between numbers before the distortion-driven punk rolled through the venue once more. Fuelled by their full frontal stage presence, all sharp edges and crashing propulsion, the quartet’s tracks seemed to reverberate off the wall with intent. Sweat pouring off those who made it to the front, the room swelled in unison for a rendition of the defiant screeching chorus of ‘Backwards.’ A telling performance from one of Belfast’s better live acts.

In between acts, the room felt like it had doubled in size. Either the smoking area emptied, or the personalities simply took up more space. After a short break, a neon sign burned into focus, the logo of the headline act glowing in the heavy darkness of the stage. A fitting metaphor. Back turned to the stage in diction, a thunder of drums drew my attention. The dogs of the hour, it seemed, were ready to begin their show. The band took to their instruments flanked by applause, opening their set with a triumphant riff that had fillings rattling in their respective skulls, the bright cry of “It’ll be okay” ringing in our ears. Their style seemed custom built for the night, as a cursory glance around the room saw it alight with faces pulled into wide grins or mid-shout. The upbeat, relentless joy of the latest album is addictive and even rebellious. A strike back against the forces of chaos and division, its warmth and joy translated into a fantastic live sound that was steered by its skipper. The term ‘natural frontman’ is bandied around too often, but McCullagh seemed completely at home in this setting. Even as I was taking notes, I had one eye glued to the stage, unwilling to miss anything.

As each tune came to a natural conclusion, cheers gradually became louder. “Thank you all so fucking much” gushed the frontman, (the phrase of the night. I lost count at the 12,000th ‘thank you’) swept away in the moment. One could hardly blame him. ‘Sing’ received a deafening cheer before its cavalry charge drum fill even began, the deceptively heavy pedigree of ‘Stones Across The Lake’ inspired waves of headbanging and the subtle romance of ‘Tonight, Tomorrow’ had strangers swaying in each other’s arms. I’ve been to louder, busier gigs but there have been few that felt more perfect. The size of the audience, the low, claustrophobic ceiling, the piercing cry of McCullagh and the familial vibe of his band and crowd, it would have felt wrong if anything had been done differently. It could have been the first gig of the month but judging from the energy of the crowd it might as well have been the last one on earth.

The show continued as such, with occasional life advice (“Don’t try to seduce anyone without the help of two other people”) sprinkled throughout tunes. The echoing, twilight buzz of ‘I’m Alive’ gets the reception it deserves, with the Joplin-esque wail of “lonely, lonely, lonely” garnering some of the loudest contributions of the night. Looking around, I wondered if there had ever been this much love in Limelight 2 before I am press-ganged into a human wall for the football chant euphoria of ‘The Also-Rans.’ A true highlight, with the crowd, gathered together like a twisted take on the Addams family for a sing-a-long of its stomping chorus. A solid 18 seconds of applause follows the set as McCullagh raises his hand in thanks, job done for the night, but not before he addresses us once more. “This is all I have ever wanted to do. thank you from the bottom of my heart, I hope you enjoy the album. Thank you, thank you, thank you”.