by Betsy Bailie
in Live Reviews

Spectrum Festival returns for its 5th year, hosting the reunion show of A Plastic Rose. The band have a lot to live up to – their reputation as live performers in the local music scene is well known but the audience will be the judges of whether they’ve still got it. Fans old and new gather to the Belfast Empire for one last night of nostalgic riffs.

Surf Green open with energy and youthful enthusiasm, bringing with them bags of balloons and a punk-y attitude. “They wouldn’t let us have a confetti canon so we got balloons instead”, they claim. Their edge is their constant audience interaction, frequent screaming and angst ridden songs exploding with teenage hormones. Fresh off winning Voodoo’s Battle of the Bands, Surf Green prove they deserve their winning spot and place in this line up. 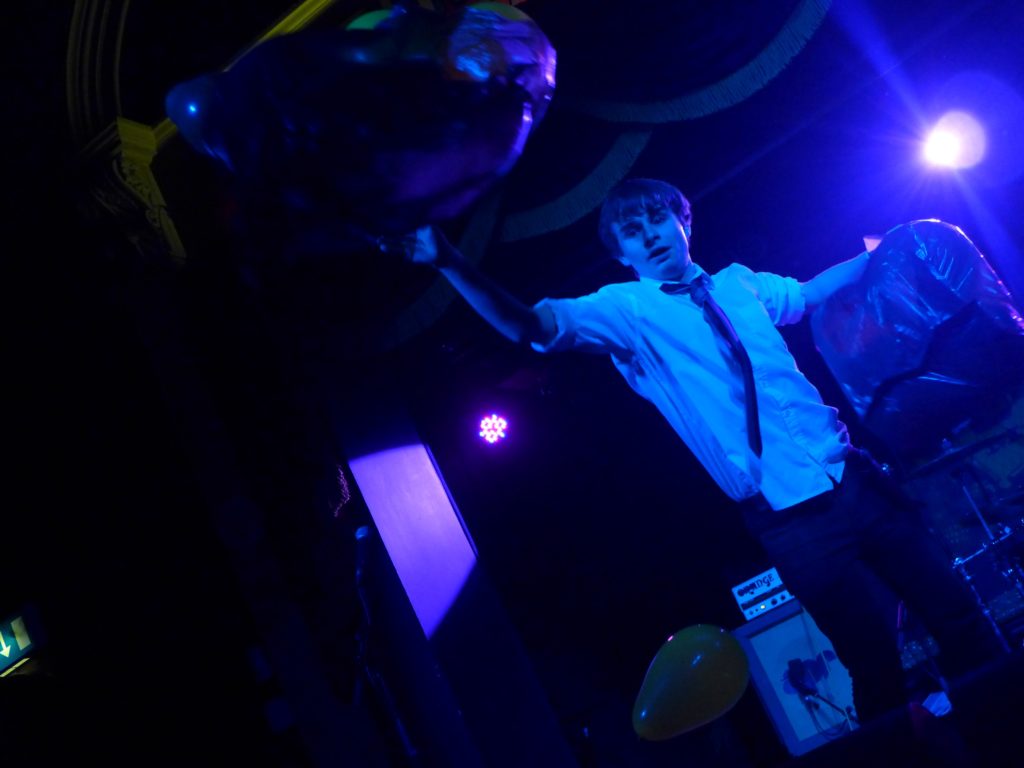 Hello Casanova channel pop punk and express an emotional tribute to drummer who will be leaving for England. Frontman Irwin gushes, “I usually dedicate this song to my girlfriend cause it’s about her, but tonight it’s for you.” They play their first show with new bassist, and the last with their drummer of years. Their parting hug at the end feels intimate and poignant, and their punk fuelled performance is one to remember. 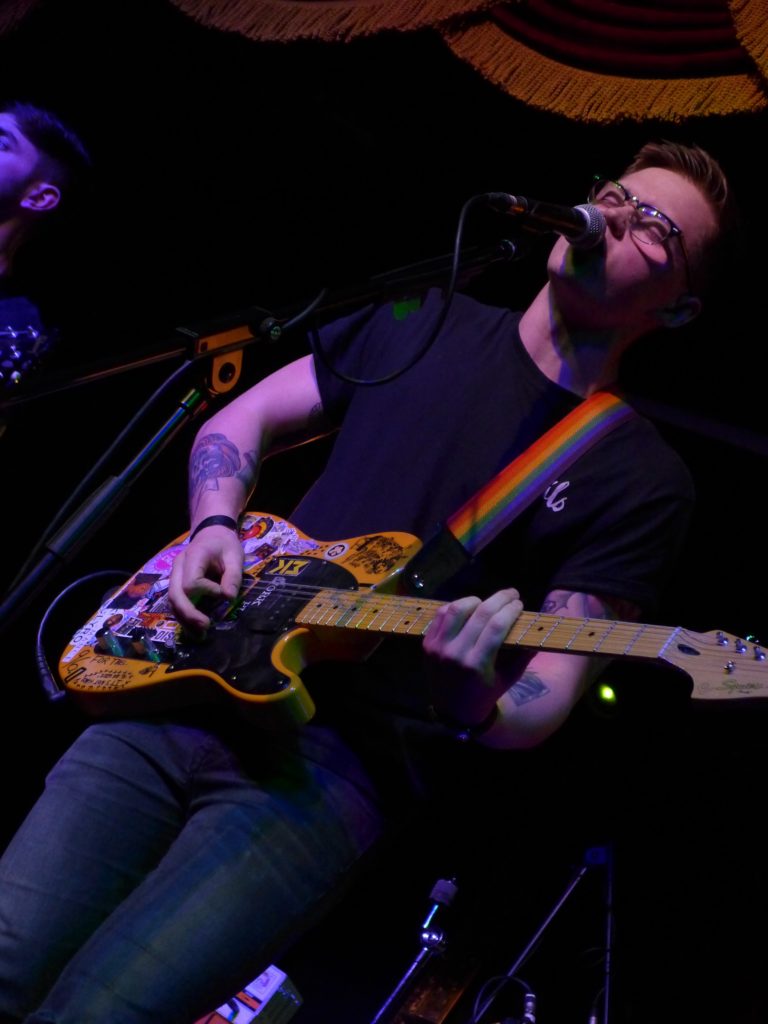 Next are Search Party, fiery with potential, asking fans to gather at the front for their performance. Set lists written on paper plates are an unusual but creative addition. Their brand of energetic rock is the perfect follow up to Hello Casanova as the room starts to fill. 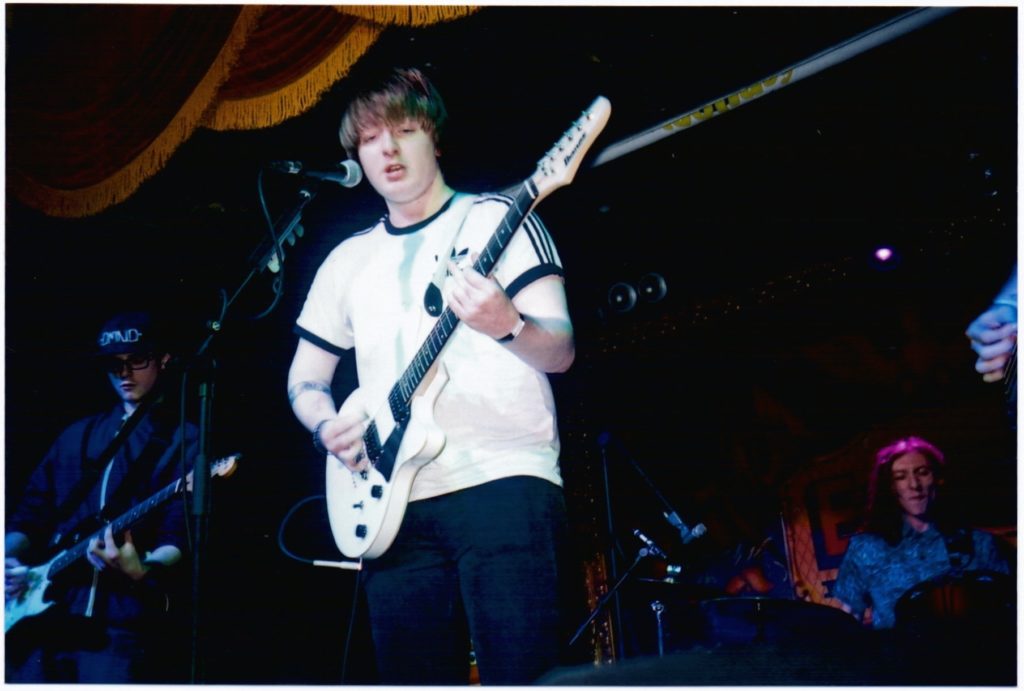 Derry’s Scenery followed and turned out to be a real breath of fresh air. While they are definitely grounded in rock, the addition of a saxophone player adds a real soulful edge to their sound. Combine this with the quirky nature of front man Stephen Whiteman and it doesn’t take them long to win over the burgeoning Empire crowd. They are testament to Spectrums commitment to build a line up that caters to all music tastes with soul, indie rock, punk and pop. 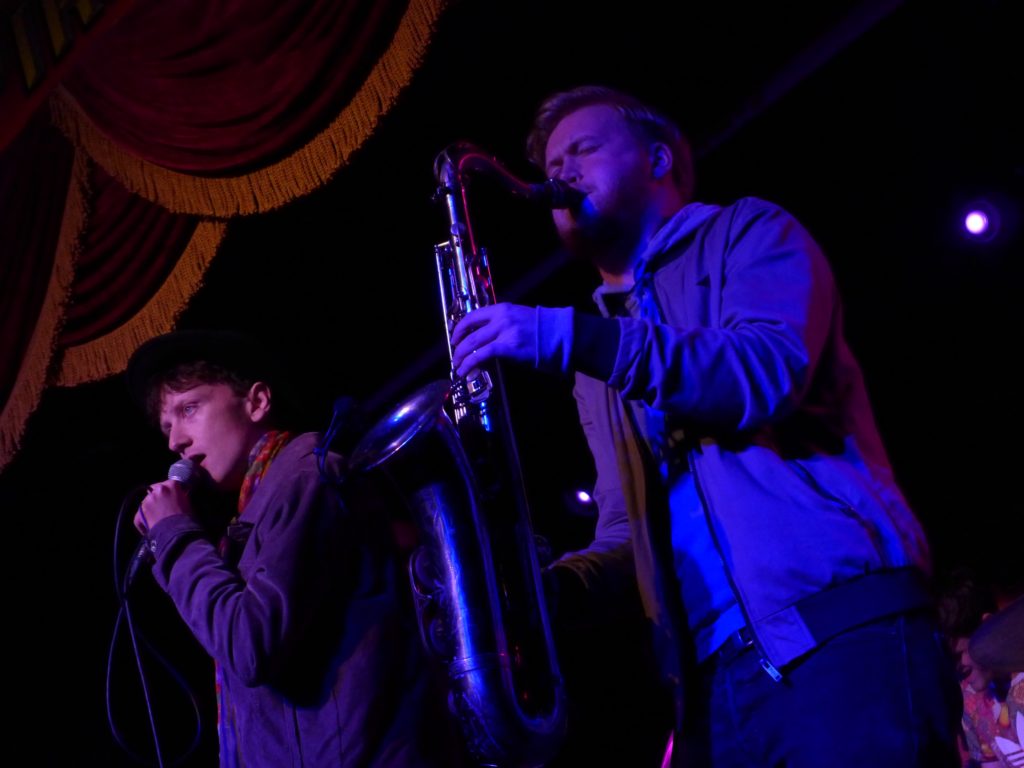 Jealous of the Birds bring a sweet and mellow vibe to the line up. Naomi Hamilton wears a silk kimono and plays favourite, ‘Goji Berry Sunset’. The singer at the front gets a mention, “shout out to the goji berry singer”. They are a different style to the rest of the acts, Hamilton admitting, “I feel like every band has been really punk so far so we’re going to mellow it out for a second.” They take a moment to wish a happy birthday to bassist Pete, even bringing out a cupcake with candles on it while the audience chant happy birthday. 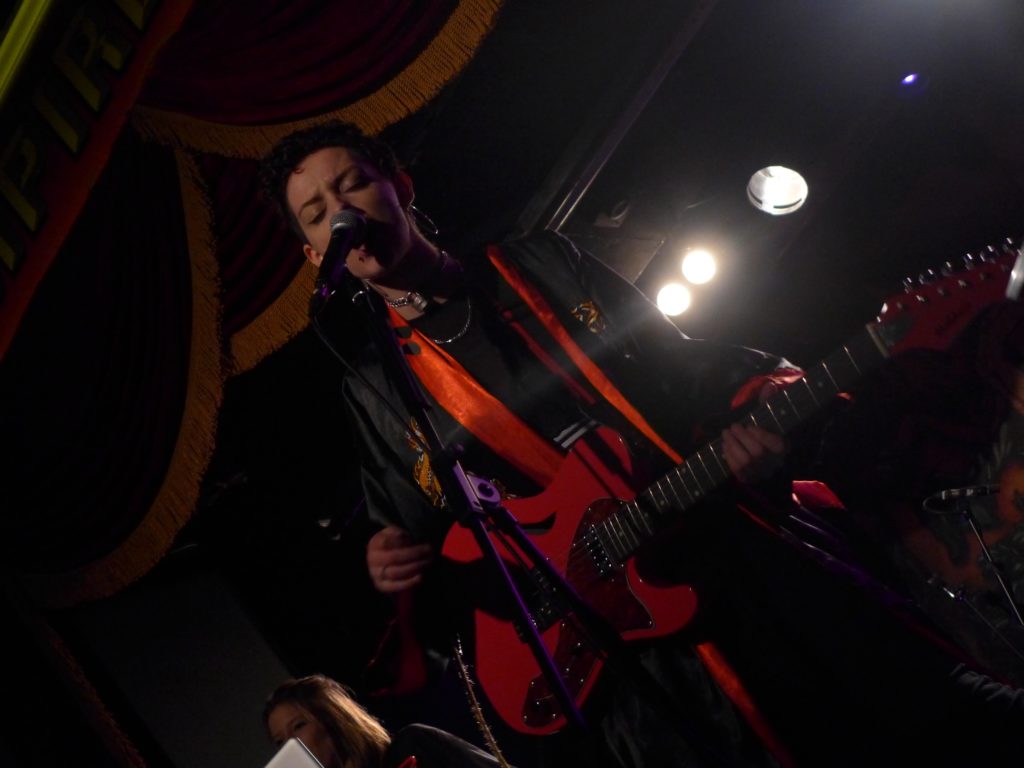 The penultimate band are an obvious pick for any big Belfast show, as they’ve proven their spot in the local music scene this past year. Playing big festivals such as Radio 1’s Big Weekend and Electric Picnic; they are a worthy addition to this line up. They are Brand New Friend; indie pop-rock bursting with endless gratitude. Taylor Johnson anecdotes, “The first gig I ever got kicked out of was an A Plastic Rose gig. I was about 16 or 17 and I sneaked in when the bouncer wasn’t looking”. Synth player and vocalist Lauren follows this with, “Obviously we don’t condone that behaviour!”. They are obviously very grateful to be playing with such a prestigious headliner. They give the performance their everything, resulting in, Lauren losing her glasses in the very first song! They mix their set up with well known pop numbers, as well as some chilled out new songs. They play crowd favourite, ‘A&E’, in which the audience chant back the lines. 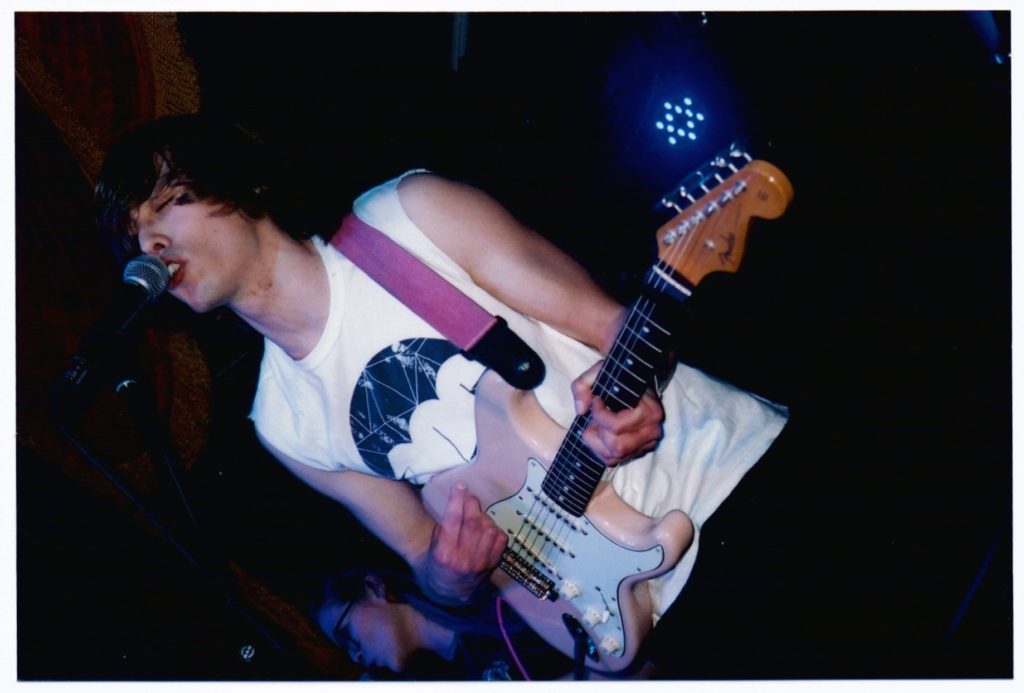 A Plastic Rose, the act everyone has been waiting for, drag everyone to the floor for their set. “I said if we’re going to do this, there has to be these two bands. The first is Jealous of the Birds, and our little brothers and sisters in Brand New Friend”, Gerry claims. The set shows people on their friends’ shoulders, jumping and singing along, echoing the lines “I’m starting to feel like I can do anything”. People jump so hard it’s a wonder the floor didn’t fall through. The dramatic encore shows Gerry Norman struggling to get a keyboard working, playing crowd favourite “Kids Don’t Behave Like This”, and the audience going even more crazy. They definitely gave the performance of their live and careers, resulting in a smile on everyone’s face. A Plastic Rose have definitely still got it. 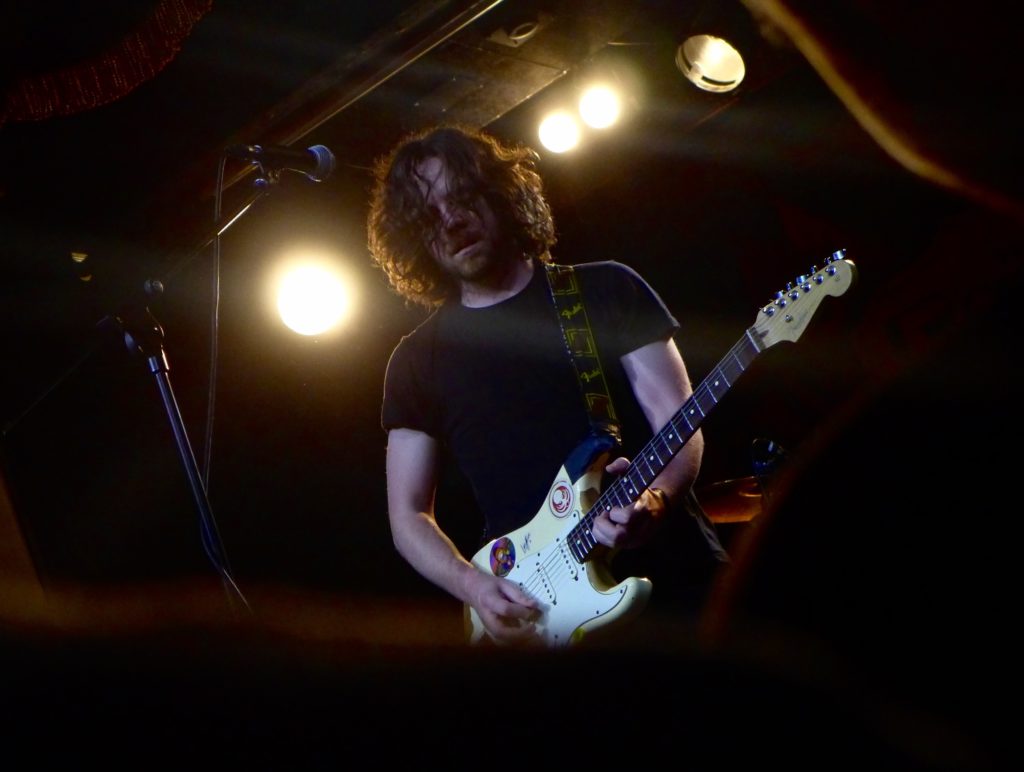