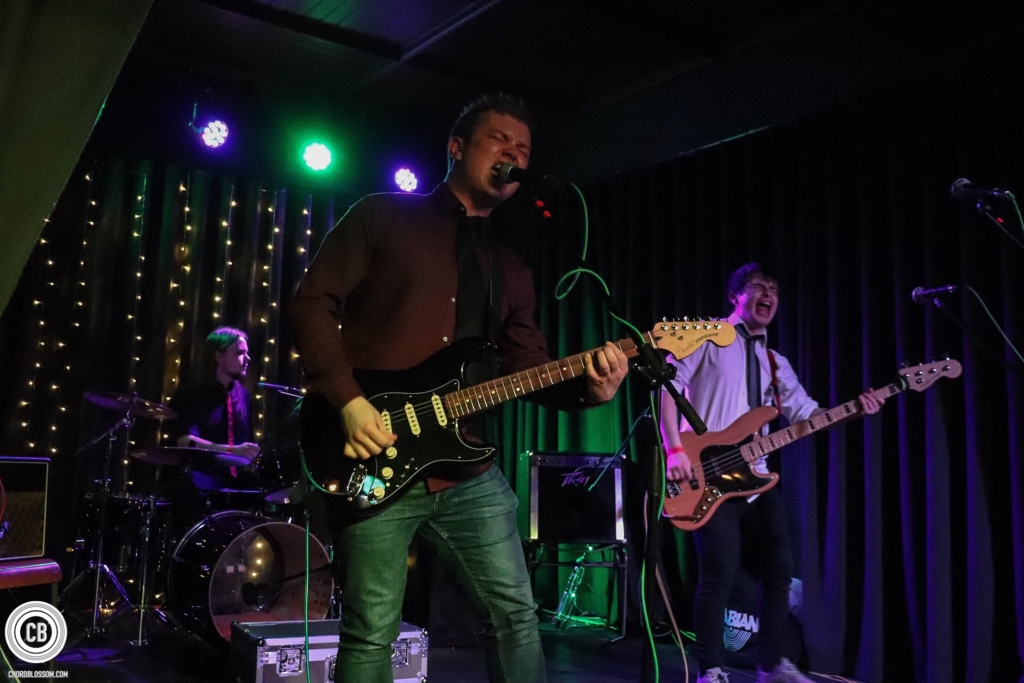 The sheer ambition of the night deserves a moment of note in itself. Eight acts. One stage. Four hours. Few beer. I’ve certainly had less intriguing invitations in my time.

I made my way to The Pavilion amidst a smog of chip grease and spring rain. I’m twenty minutes early to my third gig in as many nights. I’m desperate for a seat, this promises to be a long one. So imagine my surprise/horror to see that nearly every receptacle for bums has been filled before my arrival. Woe for my knees (and the family who have somehow managed to book a fiftieth birthday celebration on the same night. God love them, they’ve no idea what they’re in for) but a blessing for the bands. I settle in with a Beer Of The Month and await the arrival of the first act.

The first two acts of the night work to set the tone. Chicago Typewriter looks to capture some musical elements of their city namesake, fusing blues with their noisy take on garage rock. Meanwhile, Sonic Architects take the place of Ember Trails (RIP) and perform a guitar-driven set, highlighted by distorted riffs, and the occasional head rear of an aggressive buoyancy that gives enough of a ‘blast from the past’ feel to open up their sound. The sound from our openers alternates between heavy and melodic, indie and alternative, setting the pace for the following acts to follow.

Next comes the alt-rockers Gnarkats, whose offers to advance to the front are largely rebuked. No matter, as their tunes largely ring true. Swooning pop bridges lean into bouncy, chunky fills and intricately enjoyable breakdowns. The vocals of singer Louis Nelson (also the bassist. I trust bands with bassists who do vocals. I don’t know why, they just seem like they’ve got something figured out) are given a cheeky spirit and a spicy depth, buoyed by the near constant roll of guitarist Jordan Evans. Small technical blemishes arise in the form of feedback spikes (it’s rude to count but I did so anyway. I got five, the punter to my left went with seven), but are quickly forgotten amongst what is largely a fruitful set.

What immediately followed was the most attention-grabbing act of the night. Civil Simian began their set with a jowl gripping funk, following it up with the echoing grandeur of their powerful vocalist. Sonically interesting, with little flicks of whimsy, electric funk and shoulder swaying groove, CS have natural charisma. The fact that it is backed up by a hard-hitting, groovy miasma is a plus. Despite reportedly missing two-fifths of their band, their music on the night was complete and seemed rebellious within the context of their contemporaries that evening. Ruari McCloskey’s smouldering Motown growl was assisted by the stinging slab and the bass and the group’s innate two-step jiving joy. Their colloid-like the sound is a joy to hear and an exciting, fresh addition to a musical habitat saturated by indie/alternative sounds. An audible groan of annoyance escaped the crowd as they announced their last song. Actually, it might just have been me being loud.

The meat and bones of the night proved to hold their own. A welcome return for scene veterans Search Party (the first I’ve seen them in several months) reminds me how much I’ve missed them. Having lost none of their swagger, their unique mixture of raw and rehearsed has a life of its own. Eternally accessible and fuelled by a blend of electric bites and soothing silk ease, they close their set with the urban exuberance of ‘Amsterdam’, a guaranteed winner. They are followed by one half of the organisation team, Twelve Step Program, whose slowly hypnotic ethos is a sharp left turn. A bluesy sway follows, creating an atmosphere around them which the audience was guided through by the gentle lean of their stripped back vocals. A welcome break from the bedlam, the dreamy blues pop is both toothsome and alluring.

The last two acts now have the attention of the largely filled room. Surf Green, who emerged from the same class as Search Party, are first to take the stage with their mix of pop and scream punk. Noticeably more mature than their earlier iterations, the fury that was once unbridled, spat like buckshot, is more confined and directed. Their cohesive approach has solidified them as an act, while their unrelenting pace now has murky, believable malice. Always a shock to the system, they lived up to their reputation. Then comes the final act of the night, Hello Casanova. Their vital sound, filled with life and light, translates well onto the stage. Multiple vocalists give them a larger than life impression, hitting the crowd with waves of sound. Their noisy indie rock and anthem inducing guitar to ensure that they are a worthy headliner for the night, administering a healthy dose of humour, gall and swagger. Layered with rhythm and propulsive twangs, they ended the night the only way they know how: with a breakdown. A successful experiment by BGO and hopefully one of many to come.