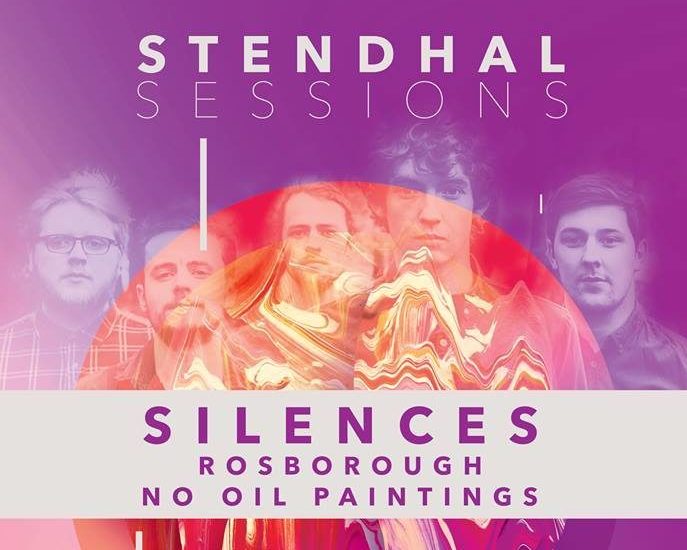 On Thursday 2nd November at the Riverside Theatre in Coleraine, Stendhal Festival brought together three local acts together all bringing different yet energetic sounds. I sat and watched as each act sound checked. “Wish they were all as easy as you” the engineer said to the first act but each act seemed raring to perform and on the bill on this occasion was Rosborough, No Oil Paintings and finally, Silences.

The crowd started to pick up as the first act was introduced and out came Derry singer songwriter Rosborough picking up his guitar. Despite it just being him and his guitar, the theatre was filled with the sounds of colourful licks of the guitar and the stunning voice of Rosborough. The intimate setting helped to establish a connection between artist and audience as the songs were introduced with how they were written, the best example of this was the song ‘Tommy’ which was based on Rosborough’s curiosity with conspiracy theorists. Rosborough left the stage with a rousing round of applause.

Following this, a short but sweet set from Belfast band No Oil Paintings bringing with them invigorating and fast paced folk rock with great harmonies as well as more relaxed moments with the song ‘Cut Me’. Due to needing to get a train the set was cut short but the audience was well warmed and ready for the final act of the night.

Silences came out and immediately began as they meant to go on with loud and visceral guitar which kept the audience fixated to the stage. A highlight of their set was the debut of a new song, ‘Sick’ which was not favoured by the guitarist of the band but was won over following the response of the crowd. Elsewhere, the band also performed their new single ‘Red Dress’ which showed the synergy between the band and looked as though they were genuinely enjoying themselves. Similar to the other acts on the bill, Silences commented on the intimacy which was a rare feel for the band but one which they thrived within.To close the set, Silences frontman expressed his gratitude for Stendal and their continued support for local talent and for the audience for supporting this event which topped off a special night.

Ultimately, what this gig showed was the talent that is possessed by local artists/bands which was showcased excellently by Stendhal in the Riverside Theatre. Also, the reaction of the crowd as they applauded each individual song showed that they were far from disappointed by the talent on show. Everyone seems to leave the theatre buzzing musing in conversation about what the events of the night.