by Roddy O'Donnell
in Live Reviews

Celebrating the release of their 8th studio album “Graffiti on the train” Welsh rockers Stereophonics finally return to Belfast since their appearance at Belsonic in 2010.

Even a wet and windy evening couldn’t stand in the way of the building anticipation at the wonderful Waterfront hall upon arrival. First up on the night was support from local artist Gareth Dunlop, a singer songwriter who had the audience in the palm of his hands throughout his 30 minute set. Something as small as a pin dropping would have echoed around the venue it was that peaceful! It was my first time hearing this local artist and certainly will not be the last as he delivered several well-crafted pieces of original acoustic delights. New single ‘Wrap Your Arms Around Me’ was a particular highlight and a major success for Gareth as it appears on the film Safe Haven! 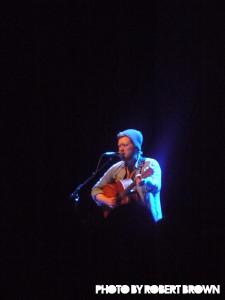 As the clock struck 9 bells the lights went down and a massive roar erupted from the Belfast crowd as the Stereophonics strolled on-stage  With no hesitation they burst into ‘Bartender and the Thief,’ a blistering drop D rock n roll track from the bands second album Performance and Cocktails. The most fitting intro possible; it almost lifted the roof off and fitted like a glove with the hyped up personalities in the standing area of the venue who resorted to bouncing up and down.

Within an instant of the song ending, Kelly, the band’s front-man , is as cool as ever in his trademark leather jacket shows his appreciation for such a warm welcome back to Belfast and launches straight into the bands classic ‘A Thousand Trees‘ to put it lightly no-one in the crowd too any convincing in screaming the opening verse right back at the band.

An absolute electric opening to a show which helped bring it down a step and gave the band an opportunity to slip in some new tracks from the brand new album ‘Graffiti on the Train.’ This included screens dropping behind the band playing clips of short films Kelly had recently directed himself. This really gave off a very cinematic vibe which goes hand in hand with the new material as I feel the new album is not a typical rock album, more of an artistic and storytelling record which reflects on the band’s journey throughout the highs and lows of their career.

Over the next 2 hours we saw golden tracks from older albums which included numbers such as ‘Local Boy In the Photograph’, ‘Mr Writer’ and ‘Maybe Tomorrow’ amongst several others. Sometimes you forget how much of a strong back catalogue of songs this band actually has.

The time had come and the band went through with the traditional walk off stage before coming back on for an encore. The crowd launched into “ole ole ole ole” the classic football chant not the usual “one more song” fiasco and almost a minute later the band crept back on-stage to a warm and blistering cheer to deliver some final treats.

With a 4 track encore unfolding the band delivered ‘We Shared the Same Sun’, ”Have A Nice Day’, ”Traffic’ and what was certainly expected in tonight’s show the bands only ever number 1 single ‘Dakota’… As the first few notes were struck once again the crowd erupted like several thousand children at Christmas (including myself) Bouncing and singing along! An absolute blinder of a finish to a show which then the band announced they shall be returning in November to entertain us all once again! Though the announcement that they would be playing in the Odyssey was roundly booed!

A phenomenal performance and as time goes by the band are growing stronger and stronger! Roll on November! 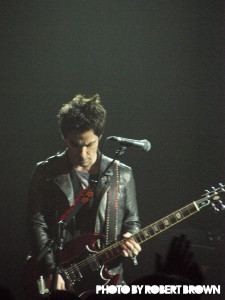 Charlie Boyer and The Voyeurs – I Watch You