Stormzone, with support from Vicious Nature, Rabid Bitch of the North, Donum Dei and Flang

Saturday September 5th, and a mighty storm is approaching Belfast…

No, not up there, silly! To witness this particular storm in all it’s majesty you needed to make your way to the Limelight for the launch of Stormzone‘s latest album Seven Sins.

First up onstage was the recently reformed Flang, who play pleasingly rough ‘n’ ready rock ‘n’ roll with a neat Irish twist in the form of a bodhran. Vocalist Chris Pattison has a ballsy, almost punk rock style hollered delivery, with the band themselves have a sort of bluesy, punky Motorhead vibe. They blast their way through a cruisy yet enthusiastic set, with the bodhran giving their low end a deeper, throatier sound, to which the small crowd responded warmly.

With a squall of electric guitars second band Donum Dei ratchet things up a notch. Always a band that look like they’re having the time of their lives onstage, tonight is no exception as they fire out tracks such as ‘Justice Fails’ and ‘Buried Alive’ to a growing crowd. Despite some sound issues that Flang also suffered from earlier (reverb in the mike, problems hearing each others’ instruments) they still sound razor sharp and are, as ever, a complete pleasure to watch live. 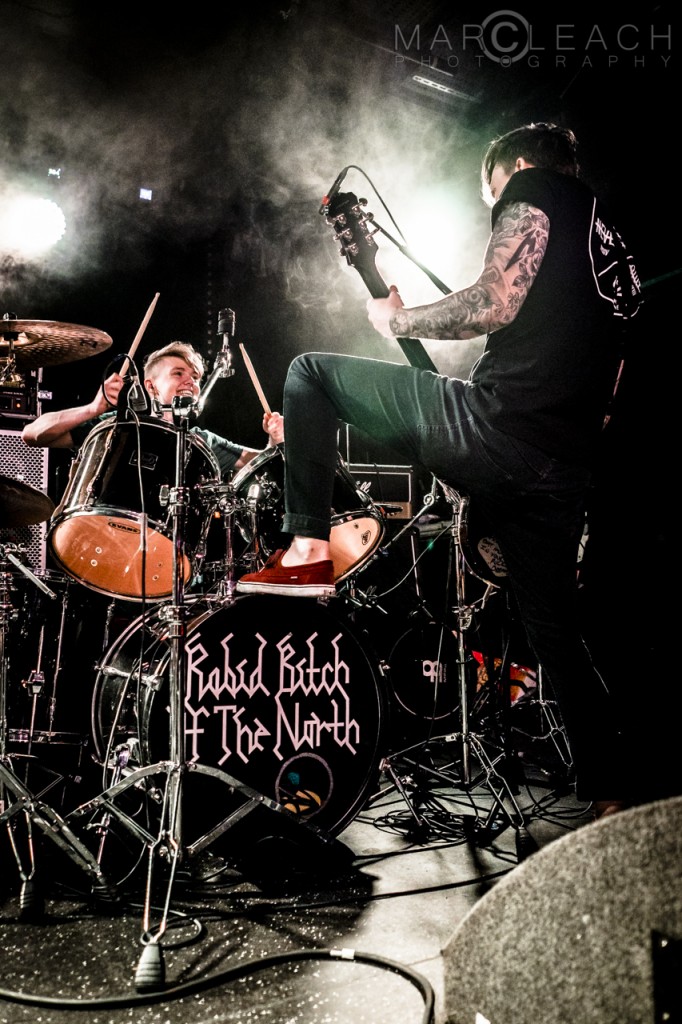 Speaking of which…it’s time for Chordblossom favourites Rabid Bitch of the North. They launch into ‘Your Misery’ and waves of raucous energy immediately begin to emanate from the stage. Drummer Chris Condie leads the charge with his usual precision as they rattle through ‘Defending Two Castles’ and latest single ‘Green Eyes’ as an impressed crowd finally gathers in front of the stage to watch this talented and hard working band give it some serious welly. Although they too struggle with sound issues (Joe’s Mcdonnell’s vocals are a tad too quiet and a repeat of the monitor problems, all seemingly stemming from an inexperienced sound technician) they still manage to kick ass, finishing with their double whammy of ‘Help! I’m Trapped In 1999!’ and ‘Us Against Them’ with Mcdonnell’s ballsy bassline and Gerry Mulholland’s riffs galore, both of which prompt the first singalongs of the evening. 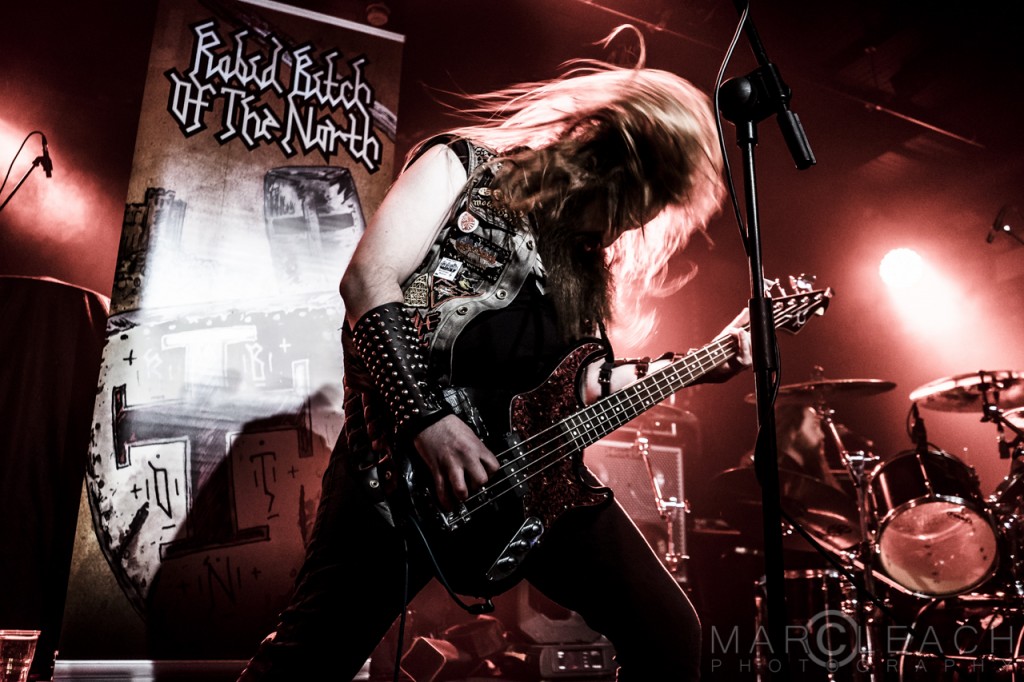 Up next we venture out of Northern Ireland for Birmingham’s Vicious Nature, who play classic rock with a thrashy twist. Formed from the ashes of Marshall Law, Cloven Hoof and Cerebral Fix, the members are all highly experienced musicians and it shows – they are both professional and at ease onstage. Vocalist Andy Pyke is something to behold as he headbangs his way around the stage, singing like a man possessed and hitting every note in his impressive range. They play a blistering set which runs through material through their EP releases, treating the crowd to tracks such as ‘Salvation’, ‘Breathless’ and ‘Draggin’ Us Under’, and wrap up with anthemic number ‘Fight For Your Life’, which sees Pyke at the barrier trading headbangs with a certain Mr Traynor. A great set (despite the by now predictable sound issues). 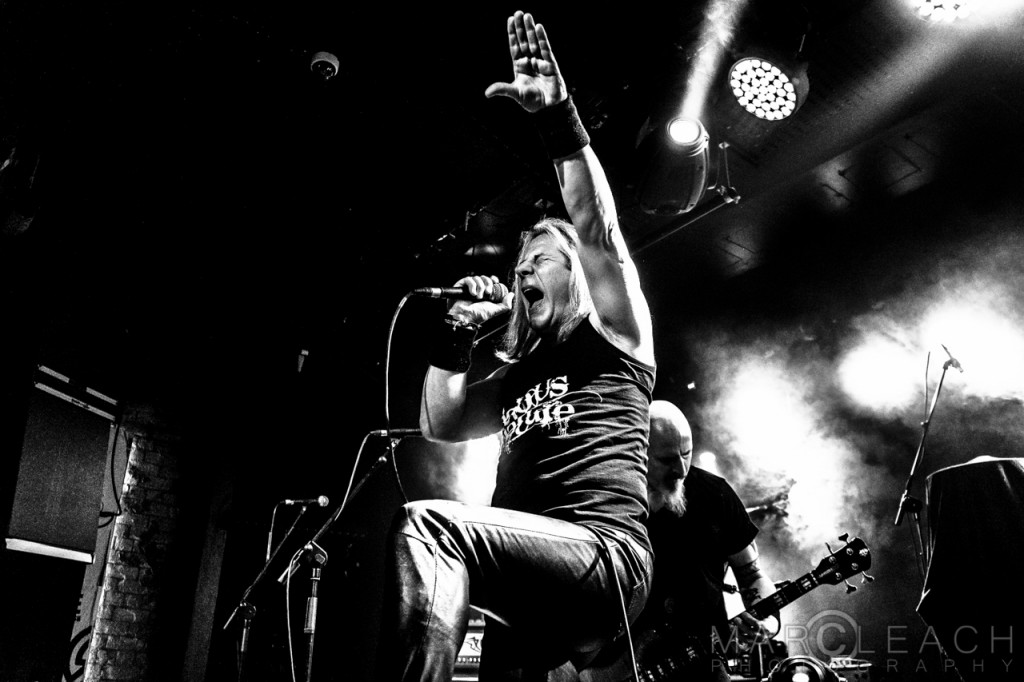 With the small crowd now thoroughly ready, and with mere minutes to go before Stormzone unleash their might, disaster strikes: lead guitarist Steve Moore’s AxeFX’s pedalboard meets a full pint of water and…well…electrics plus liquid equals a very stroppy piece of kit! As a result they don’t hit the stage until 8.20pm meaning they have to cut a few songs from their set and Moore has to think on his feet in order to rejig his guitar parts.

But the show must go on, and it does: the band slip onstage under cover of darkness, and when the lights abruptly go up they’re all clad in black (including vocalist John ‘Harv’ Harbinson’s dark glasses) and – wait, what?! Three guitarists are up there! It turns out that original guitarist Steve ‘Doc’ Doherty has rejoined the band (possibly permanently), which lends the set a rich, full sound that does much to cover up the technical issues.

They come out swinging with Seven Sins opener ‘Bathsheba’ followed by the hook-laden (and this reviewer’s favourite) ‘Another Rainy Night’, to the delight of the crowd who respond with noisy appreciation. Harv keeps the chat to a minimum due to their late start as they blast through favourites such as ‘Three Kings’ and ‘The Pass Loning’. The band, as always, interact very well with each other, with obvious joy and enthusiasm. The result is some stunning twin guitar work, rich harmonising and simply a terrific live performance – you could power Belfast from the vim and vigour flowing from the stage tonight. 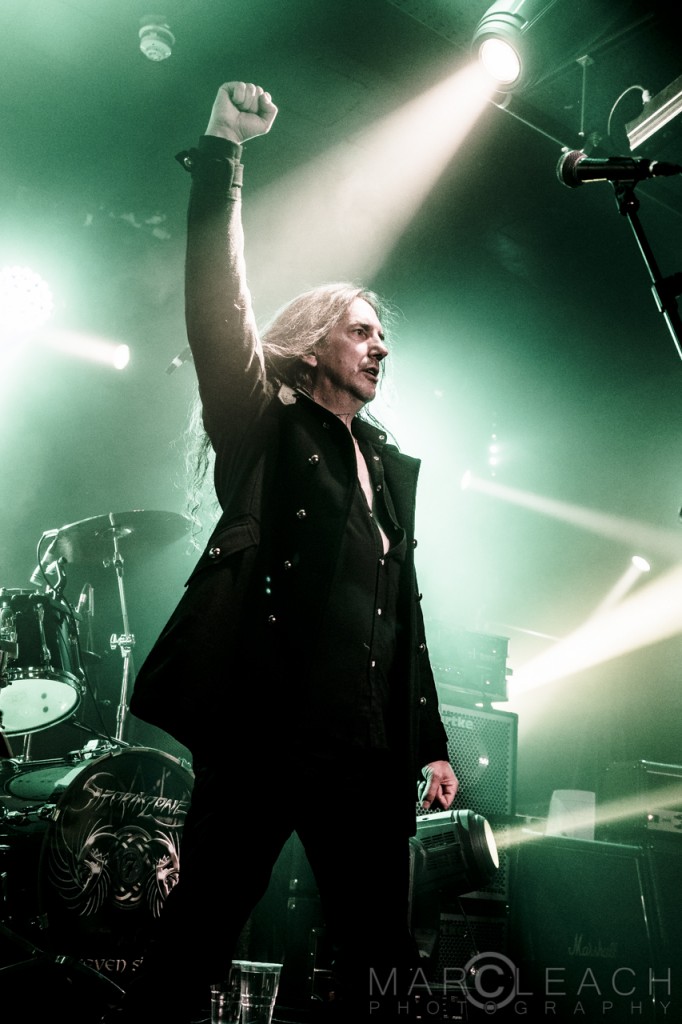 There are, of course, some sound issues: feedback screeches out intermittently, and Harv encounters some microphone problems (sound desk fail!), but they soldier on regardless. The result is that they bring Seven Sins to life, the way a live performance should. The tasty riff and chugging breakdown in ‘You’re Not the Same’, the stomp and bounce of ‘The One That Got Away’, the huge yet streamlined guitar attack in ‘Your Time Has Come’…all are given a unabashedly spirited and entertaining introduction tonight.

They conclude with the punchy ‘Death Dealer’ (for which Doherty wrote the riff) and their soaring, majestic traditional closer ‘The Legend Carries On’, not only bringing the story of central character Dr Dealer full circle but wrapping up a thrilling and absorbing set.

Despite some technical difficulties that would have written off a lesser band, tonight Stormzone snatched victory from the jaws of defeat and blew the small yet pumped crowd away with a performance worthy of their lively moniker. Mightily impressive, lads. 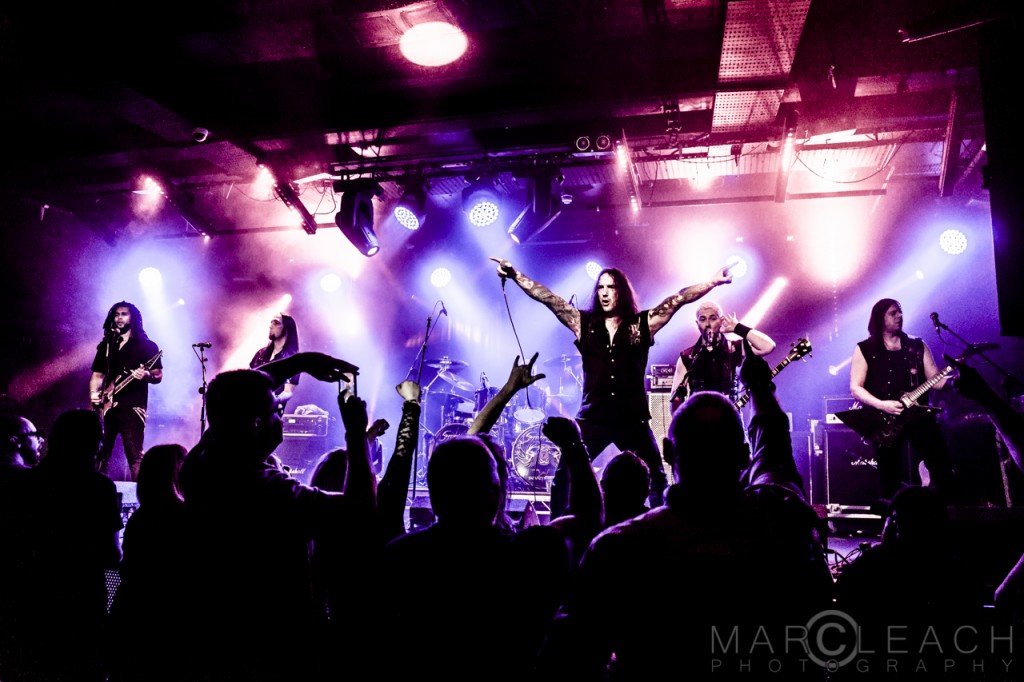 Still haven’t heard Seven Sins? You can buy it off the band’s website www.stormzone.tv

Read Al Gilmore’s review of the album here, and my interview with Harv and Moore here.