It’s hard to avoid that ‘end-of-year reflection’ as I take my place at another packed gig at the Diamond Rock Club. I am going to witness an up-n-coming local metal band in Maverick and THE premier local Heavy Metal band, Stormzone; two bands that between them represent the past, present and future of local HM music.

Maverick is a bit of an overnight success. To say the 5 piece has come a long way in a short time is a bit of an understatement having been formed little over a year ago, Maverick now has a record deal and has already supported Faster Pussycat and played at Highway to Hell, though I get the distinct impression that Maverick view tonight’s gig as their crowning glory of 2013. This is the band’s third appearance at the D.R.C. and given that Derwin (D.R.C. organiser) does not suffer fools gladly, it shows that he also believes the band has a future.

There is much to like about Maverick. They are a bunch of very affable, hard-working guys who clearly love what they do and clearly want to improve. And improve the band has. I have now seen them 3 times this year and each time was better than the last. Tonight they are tight, show a lot of stage craft and poise and play a very enjoyable set. For me, only two issues remain to be resolved. Frontman, Davy Balfour, WILL be a fine vocalist in time. He has the range, he has the presence and, he has a good onstage persona. What he needs to improve on is the consistency of this delivery. At the moment he still tends to concentrate on the choruses and ‘big notes’ and not necessarily on the verses, even at times slightly going off-key. It’s a common fault with many inexperienced singers and is one that is easily rectified by simply listening back to recordings and spotting the problem areas and by controlling breathing. The other area the band still need to rectify is their song-writing. They have the riffs, they have the sound, they have the musicianship and they have a decent idea of who/what they want to be, but they haven’t for me put it together in a complete song. ‘Top Heavy’ and ‘Cat Got Your Tongue’ are probably their most consistent songs and are highlights of the show for me. Perhaps in a live context you can get away with the odd average verse melody, or clumsy lyric structure but when they come to release an album, any weakness will be highlighted by repeated listens. I have talked to the band about this and they have said they are working hard to improve their song-writing and, given how hard they have worked to improve every area of their performance this last 12 months, I am confident they will improve.

If Maverick is a case of what might be in the future, Stormzone definitely represent a band that is right in its moment. This year has seen the band release its fourth (and finest) album, ‘Three Kings’, to universally excellent reviews. Its new management company (Blink Music Management) is securing better and better gigs, such as supporting Saxon on their upcoming UK Tour. Its new media agent for N. & S. America (Emerald Music) is helping the band’s music reach entirely new audiences across the globe. The addition of David Shields on guitar if anything has galvanized the band, and helped distill its ‘true’ essence as a band very much influenced by, but not slaves to, the classic N.W.O.B.H.M. bands like Saxon, Maiden & Priest. Like Helloween and Queensryche before them, it has taken those influences and made a niche for themselves. I am confident that Stormzone’s reputation will grow in 2014. Already widely regarded as N.I.’s premier Metal band, the band’s reputation is set to increase nationally as well as further afield in Europe and even the Americas. Exciting times await and this is a band that is ready and deserving of a much greater level of success than it currently enjoys.

Tonight is proof, if proof were needed, that Stormzone is the real deal. A show lasting over 100 minutes of top-notch Metal songs spanning all 4 studio albums highlights that the band has more than enough material to headline any show, nevermind be a top class support act to a bigger band. In fact the problem may be that some bigger bands may be scared off by how good Stormzone actually are. The band’s now infamous run-in with Sebastian Bach on his UK tour last year may have supposedly been about a row between road-crews but it’s not hard to believe the opinion many have that it was more about Stormzone being a better band, and Harv in particular a better singer, than Mr Bach & Co.

This is a band right at the top of its game, where every component part is firing on all cylinders and synchronizes to make something even better than the sum of its parts. Davy Bates is a phenomenal drummer who steers the band through its technically demanding material, injecting a little more pace in some songs than their studio versions and yet it never seems rushed, just more urgent and visceral. Graham McNulty provides the perfect foil as the other half of this powerhouse rhythm section as well as being a very talented backing vocalist. The N.W.O.B.H.M. sound is one based on twin guitars and in Steve Moore and Shields, Stormzone have a twin guitar attack to rival any of their competitors. Moore pins down the riffage, often being the first guitar we hear as each song begins, and then Shields comes stampeding in on top. His solo work is nothing sort of breathtaking at times and his command of the various sounds/tones he can wring from his equipment (ooer) is impressive and speaks of a guy who knows his instrument in a very professional manner. Surely, Shields can no longer be thought of as the ‘F.N.G’. in this band? He has more than cemented his place and more than proved his worth to the band. In fact the band seem as united/complete as ever  both onstage and offstage.

I have taken time to compliment the rest of the band, because if I started just talking about how good John ‘Harv’ Harbinson is, then there is the very real danger I may never stop and the rest of the band would feel left out. I have seen Harv sing many times now and his normal performance level is never less than excellent. Out of all the disciplines required in Heavy Metal, singing is the most ‘physical’ and therefore the one most likely to succumb to human frailty. So for Harv to have such high standards is proof indeed that he is one of the top Metal frontmen in the world, nevermind O.W.C. Tonight however, it is not one of those nights where he is merely excellent, where he hits most of the big notes, but maybe saves himself a little, or takes the odd vocal short-cut here ‘n’ there. Tonight, he is simply immaculate, perfect or any other phrase you can think of that describes how someone can sing some of the most demanding, operatic melodies virtually as if you were listening to the studio version. Not only that, but he does it with such seeming ease (talented git)! I saw David Balfour looking on in wonder and I hope he saw that this is the level of performance the truly great performers have, where each word, nevermind each line, is delivered with precision and care and there is no sense anything is being held back for the big notes. The big notes are still there aplenty mind you. The ear-splitting scream at the start of the immense ‘Spectre’, the chorus of the poignant ‘Beware in Time’, or of the rabble-rousing ‘Where We Belong’ are notes few singers could even hit once in isolation nevermind repetitively over the length of such a demanding set. Harv can though. Watch and learn young Balfour, watch and learn.

Other than ‘Beware In Time’ and a bit of drum tomfoolery by Mr Bates, this is a show where there is no let up at all in pace and intensity; no drop in performance level or energy. It is an absolute privilege to be among this gathering to see a band be so good at such close quarters. Stormzone would grace any venue big or small. Were this the 80’s, Stormzone would be headlining all over the world and releasing albums that would be in the charts both sides of the Atlantic, and we probably would never get to see them in a small packed club setting like this. But of course the whole landscape of the music industry has changed since then and so Stormzone, like many other bands, probably won’t get that mass adulation. But this does not mean it is not worthy of it and, if climbing the ladder of success in terms of Heavy Rock/Metal is now largely achieved by wowing live audiences, then Stormzone can only succeed because tonight, the only verdict, I, and the rest of a sweating, celebratory Diamond Rock Club can return is ‘WOW’!

If you haven’t made any new year’s resolutions for 2014, let me suggest some. Buy ‘Three Kings’ by Stormzone, go see Stormzone at your earliest opportunity and go check out the Diamond Rock Club in Ahoghill. Your year will be much the better for it! 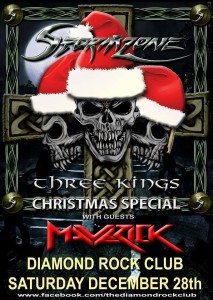