by Hannah Goodall
in Live Reviews

Thursday night, otherwise known as Student night, and the rain has finally eased off. There is still a chill in the air though and there is a crowd milling around outside The Empire Music Hall which, tonight is playing host to SONI and a positively riotous line-up of local talent. The headlining act tonight are Sweet Taste and the whole night is in celebration of the launch of their long awaited ‘Hit the Spot’ EP. Once inside I get close enough to the stage as is acceptable really. Also on the bill tonight are this generation’s hair-metal masterminds Maverick, sultry seductive The Red Velvetines, and better-suited-for-a-stadium rockers Screaming Eagles.

Sounds of Northern Ireland [SONI] is a great vehicle for local talent to be heard and the first band to showcase their musical talents are the unsigned throw backs to the glory days of hair metal, Maverick. How they are unsigned I don’t know but this Motley Crue come Iron Maiden love child are one hell of a show opener! I’m surprised my eardrums were intact at the end of the night because each band plays loud and fast and are utterly relentless in seducing the crowd. Maverick wear their music on their ripped denim sleeves, literally. They look how they sounds, 80’s heavy rock hair metal at its very best, revamped and shaken up for the twenty-first century. 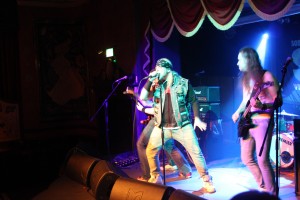 They certainly know how to get the crowd going, putting us in the mood for a rollicking good night of unadulterated local rock talent. Following on from the stellar performance of Maverick, come the unsigned, female fronted The Red Velvetines returning to SONI after an absence and, what a return it is.

They never stop moving, not for a second, and every beat and rhythm coarse through their very veins, you can see the music literally move them. They ooze raw sexual chemistry and they pour every single ounce of that into their performance. There is a degree of animal magnetism about the bad, a raw energy that envelopes them entirely in their instruments but connects them in a way that you only see in rock bands. They have such a distinctive stand-out sound, like all the bands on tonight’s bill. I have to give credit to front-woman Claire and strummer Mark because their harmonising and duets are mouth-wateringly delicious. 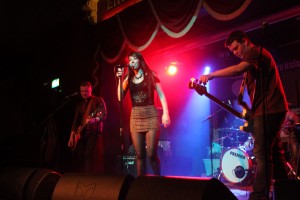 As the night ebbs another set closer to climax its the turn of The Screaming Eagles to get the crowd going and bring the roof down and they all but do it too. Classic rock that would make Primal Scream or Velvet Revolver jealous fills the music hall. Guitarist Adrian could give Brian May a run for his money, that’s for sure, making a guitar cry is a rare skill, combine that with pulse-pounding drum beats, heavy bass and amazing vocals The Screaming Eagles, who came onto the scene in August 2012, have the makings of truly great festival headliners. 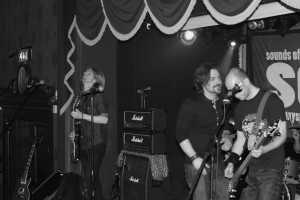 Each band on the bill tonight deserves a full gig to themselves, the fleeting tasters just aren’t enough to satisfy my hunger for new, raw rock music but they have definitely wetted my appetite. The band of the moment, whose EP was an absolute steal at the door for £4.00, close the show in style. With a front-man who has more swagger than Mick Jagger and a band that sound more like The Who than anything else on the scene right now you can easily see and, hear why they have been bigged up so profusely by those bands that have come before.

The four track EP is a beauty but Sweet Taste are definitely a bad that need to be caught live. Throwing in a few covers, out of the blue, they have an extensive set list that makes the most of their abilities. Their cover of Kylie Minogue ft Robbie Williams ‘Kids’ was utterly sensational. It’s rare that a band can cover a well known track so well that it takes a minute for you to realise just what it is. They made the track completely their own and I hope they put it on their next album or EP. The night was an all round success and each band on the bill was phenomenal and worth catching live again and again. 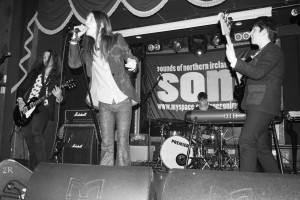