Tanglewood Music Festival is situated between the great Mourne and Cooley Mountains, based in a woodland setting just outside border town Warrenpoint. Currently in it’s third year of showcasing talent from the Northern Irish scene and a handful of southern mavericks as well. With a choice of four different stages including a boat and dolmen-esque teepee. Aside from being set amongst glorious surroundings, there were bands aplenty from And So I Watch You From Afar to NI Soul Troop. Providing a soundtrack to the backdrop of Narrow Water’s castle and grounds. 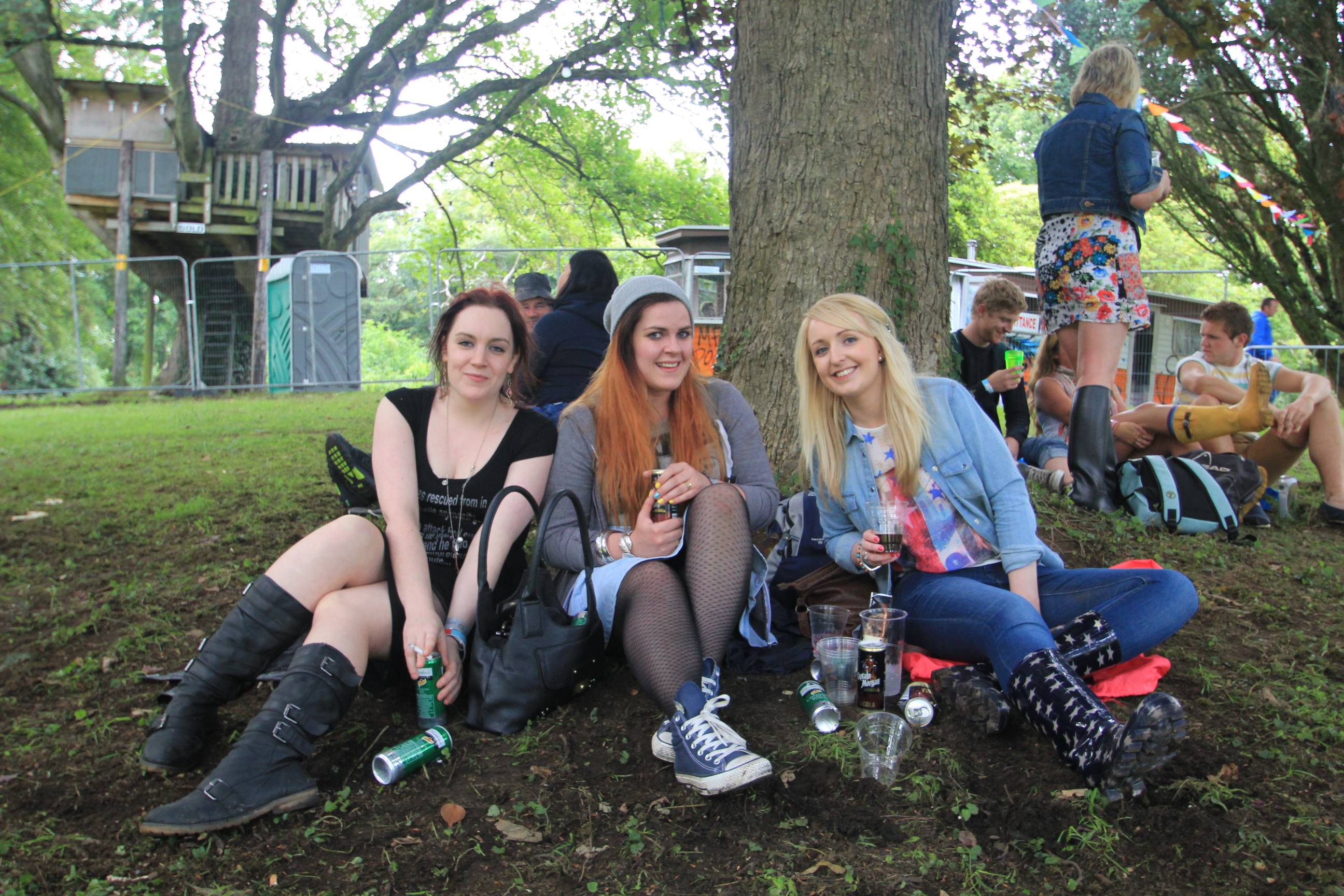 The first act on to catch our attention was Brendan Monaghan in the Gramophone tent. Suited and booted for an intimate set on his acoustic guitar he played some scaled down boogie-woogie to the roster parked out front and laid down some chilled out songs with a bit of spark.

Some other highlights from the Gramophone included Kaz Hawkins with some superbly backed gospel and blues clearly inspired by the banks of the Mississippi (with some good humour to boot too). Gentry Morris; a Nashville raised songwriter with some lovely heartfelt songs that really offered a nurturing hand to the punters nursing their heads from Saturday evening’s entertainment.

Over on the HSS Spirit Store there was a mess of rock to ska and punk to even things out. With bigger names like Rams’ Pocket Radio and Duke Special carving up the crowd with their respective signature sounds. Duke Special painting the late afternoon with some bouncy ragtimey melodies and Rams’ sombre tones in the early evening- but it also showcased copious other talents on the fringe of the scene like The Anti-Depressants from Armagh. A steamroller of punk, ethic fizzing with energy, they started the crowd moving despite their early slot on the bill on the Saturday. RichardRichard were a young up-and-coming outfit alongside 2minutes2midnight. All sounding well but still sounding samey. A sad pitfall for most bands. 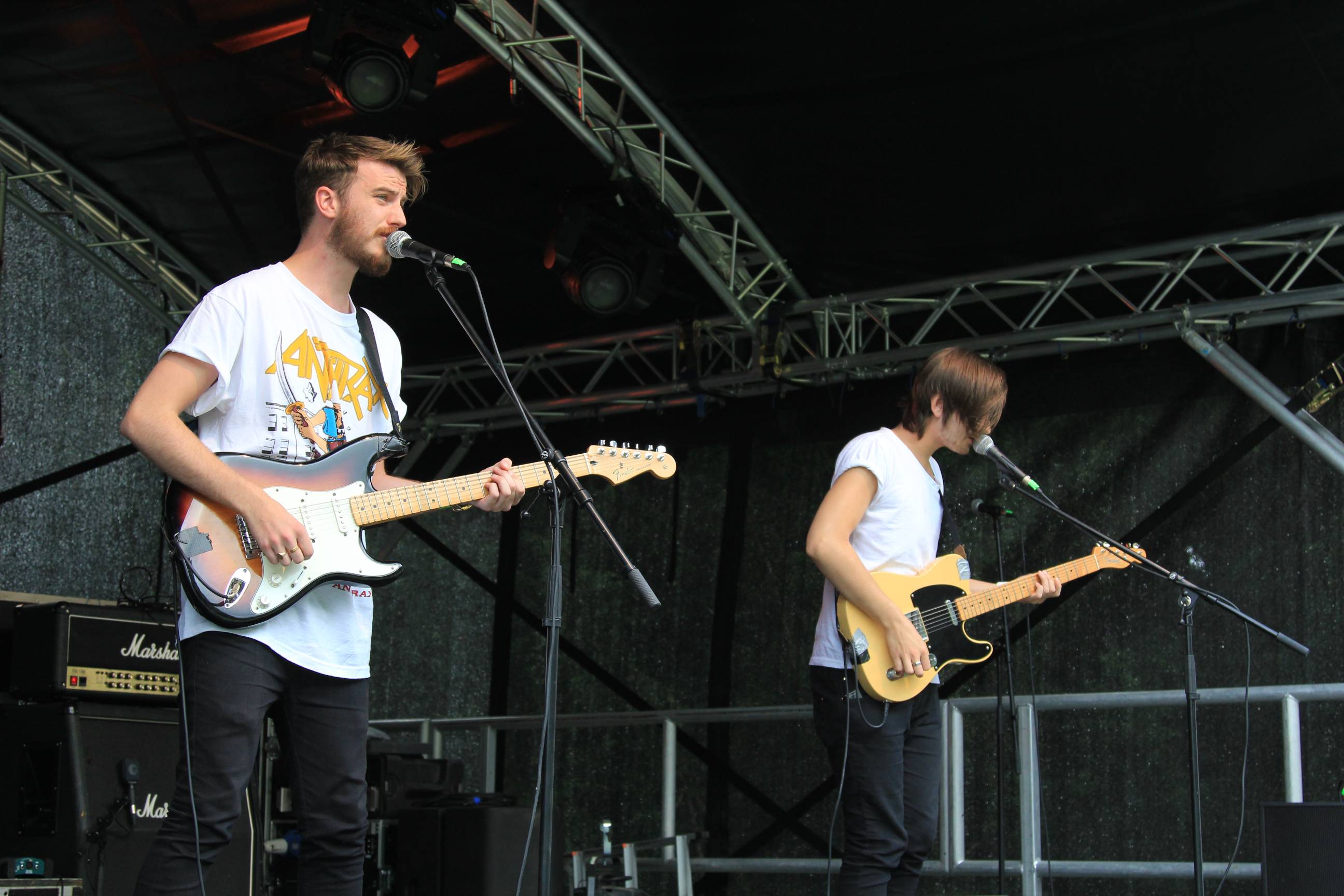 On the main stage festival circuit familiars More Than Conquerors kicked off the start of the heavier music with some tasty tunes from their new record. Sadly they were placed near the bottom of the bill on the Saturday, due to a later support slot with We Are Scientists in Belfast but they still put on a show regardless of rain or shine. They had some dirty guitars, bass and drums backed up with some swooning harmonies. ‘All That We Can’ treats us to a thunderous opening of shotgun guitars progressing into some lighter pop-rock more a-kin to a band like Paramore. That’s not a bad thing but admittedly something we were not expecting. ‘Bear Knuckle Fight’ signals an end to their Co. Down transgression with vigorous burst of passion.

Following on from that racket was NI Soul Troop who had some perfectly crafted near pop classics inflicted with some sexy Motown arrangements. Donal Scullion’s nonet powered through their pre-disco tunes with incredible crystalline musicianship that made them stand out from the guitar-based groups that dominated the festival. Not to forget that Mr. Scullion had a small seductive chilled session in the Gramophone tent as well. ‘Meet Me In The Middle’ delivers the first real moment of the weekend as jiving revellers form a straight line through the main stage arena to dance and sing to the final verses. 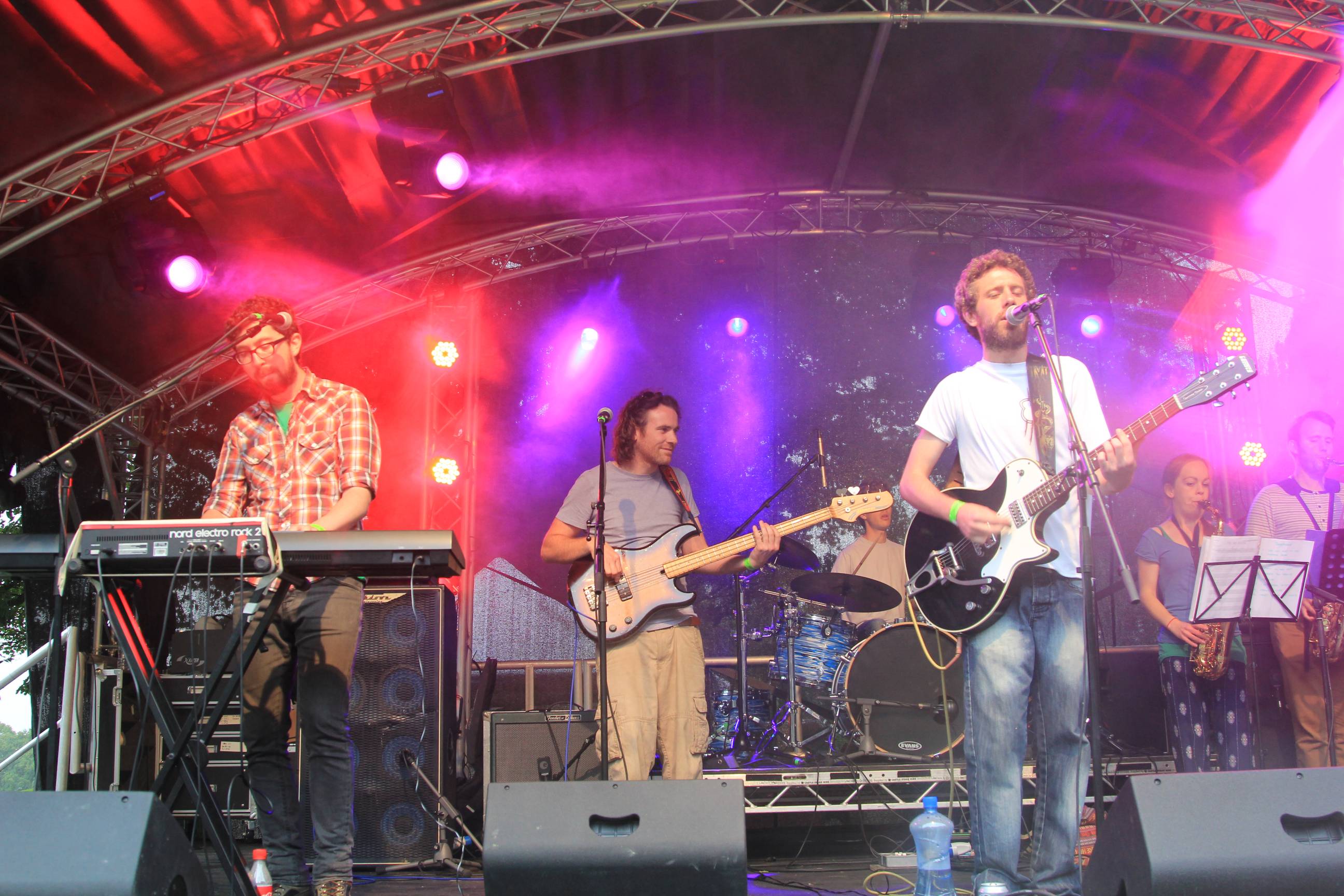 Two very strong sounding bands that donned the main stage were Hurdles and Young Aviators. Hurdles had an exciting blend of spacious melodies cast against some forlorn lyrics amidst a tightly condensed and rehearsed setlist. The Pheonix inspired upstarts are still taking the early steps of their musical careers but based on this performance they already have strong direction and youthful exuberance on stage. 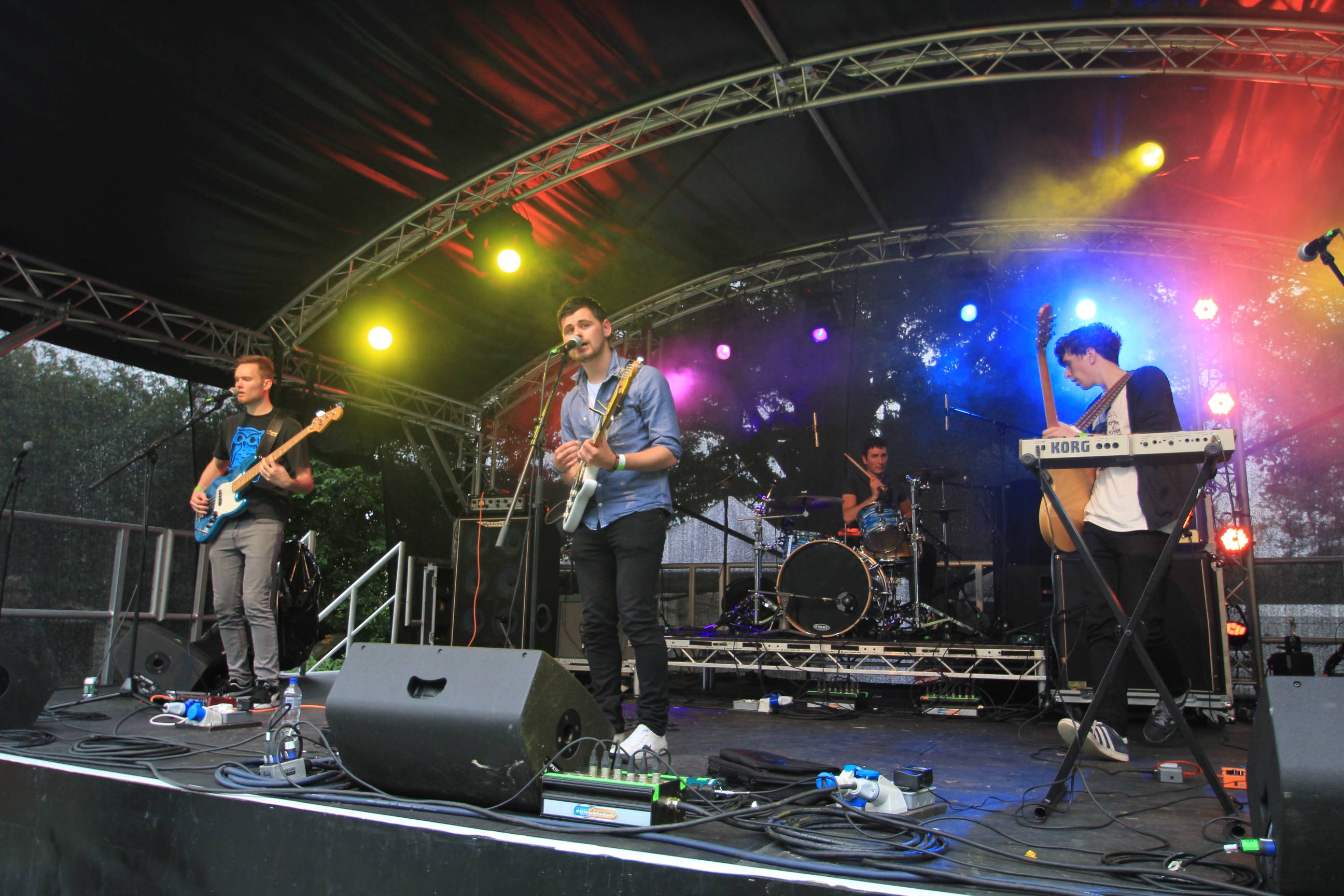 ▶ How do you feel your set went?

We felt it went great. We were able to throw in a few new songs which seemed to go down well. We spent a bit time this morning doing some extra practise on them which paid off.

▶ How has the festival season been for you guys?

This is our first one as a band so we’d didn’t know what to expect but it’s been fantastic. We played Glasgowbury two weeks ago on the main stage which was a brilliant experience. Sad to see the festival go, but proud to have been able to play it.

▶ Recent single ‘Kaleidoscope’ has created a fair bit of buzz, you must be happy with it’s success?

It’s helped open a few doors for us. It’s probably our most well produced track and as a band you always hope for your songs to do well. We’re very grateful that people dig it.

▶ How do the next few months shape up for the band?

We head into the studio very soon so keep on the look out for an EP near the end of the year. Then fingers crossed a tour in England, but we’ll see how it goes. Our next show is August 14th at Voodoo with Go Swim supporting. Come on down and hear us before we hit the studio.

Energetic trio Young Aviators rocked the socks off onlookers, not lingering on their lyrics or getting hung up on their stage presence. Some conversational exchanges between the band and the audience kept their performance fresh between songs. Local to Warrenpoint lead singer Decky Spouts, “We’re actually from this part of the world, so it’s great to be back.” Further remarking, “We moved to Scotland because here didn’t rain enough!”. Luckily for us there wasn’t a rain drop in sight. Songs from their new album are garage rock delights with new single ‘Forward Thinking’ garnering a rousing reception. In an almost genius move the band offered a toaster (Yes! A toaster) to whoever was the most craziest during their set. To the horror of health and safety officers everywhere they kept their promise and threw said toaster into the crowd. This is not their first diversion into throwing items into the crowd, they’ve treated audiences to sprays of cereal in the past. Clearly well-educated in keeping their fans appeased. Breakfast is the most important meal of the day after all. 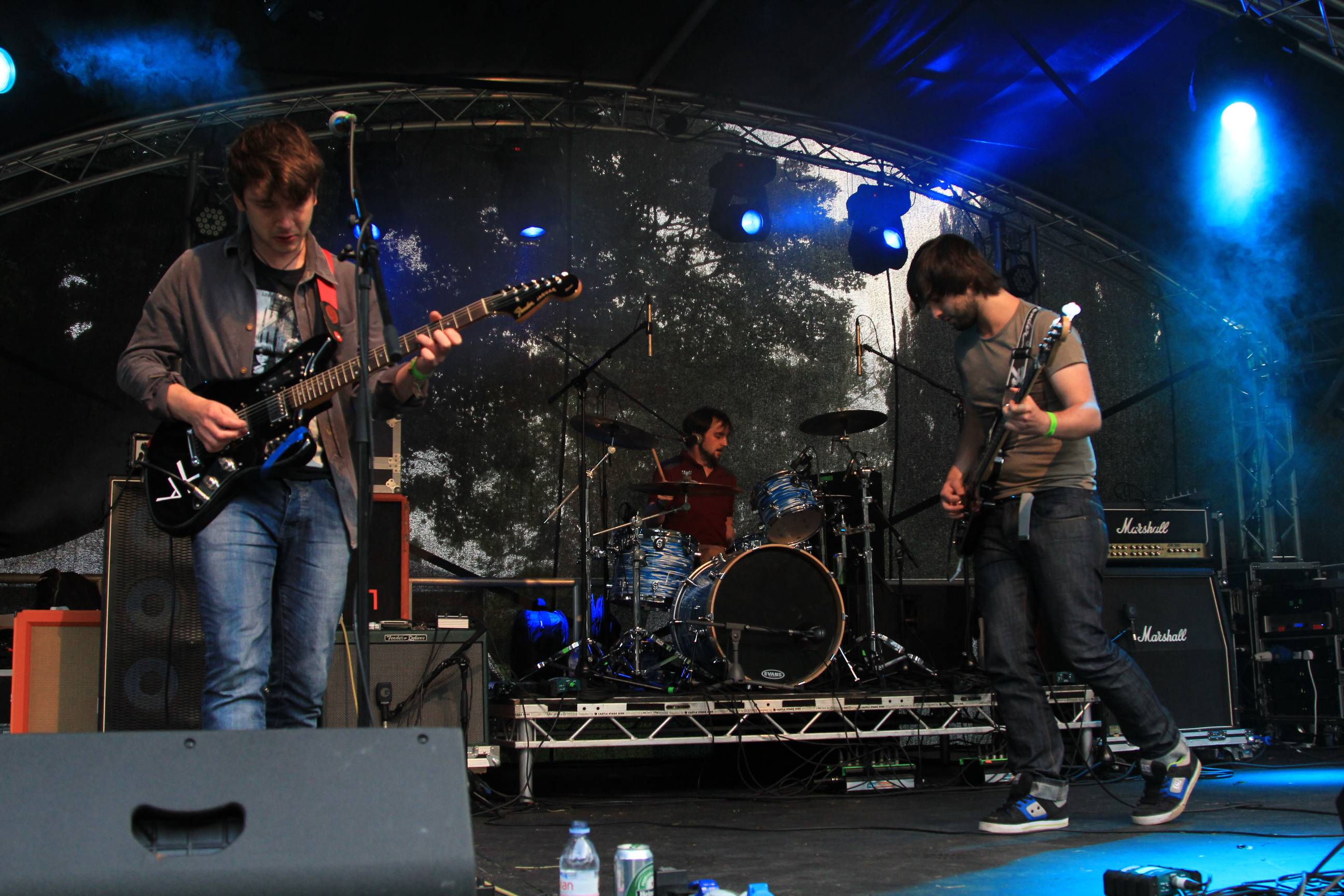 Gama Bomb poured some golden speed metal on to the bill. Thoroughly entertaining but very loud and very fast; your grandparents mightn’t like them. Slightly out of place on a bill of more low key acts, but their followers didn’t mind in the slightest as a frenzy brewed.

The final two bands that brought Saturday to its climax were rock monsters And So I Watch You From Afar and Pocket Billiards. ASIWYFA eclipsed many of the original bands that had already made their mark on Tanglewood, their soundcheck was painful but only referential to how pleasurable the real show of theirs would be. Soaring guitars married with heavy drums and bass manifested in to an electric current of frenzy at the front of the stage. Tracks from new album ‘All Hail Bright Futures’ featured heavily amongst a plethora of local classics. ‘Ambulance’ is a jolt of scuzzy math rock while ‘7 Billion People All Alive At Once’ is an anthemic wonder. Rory Friers thanks us for our support of local music as he reflects on his own band’s progression. Like a fine wine, they are only getting better. 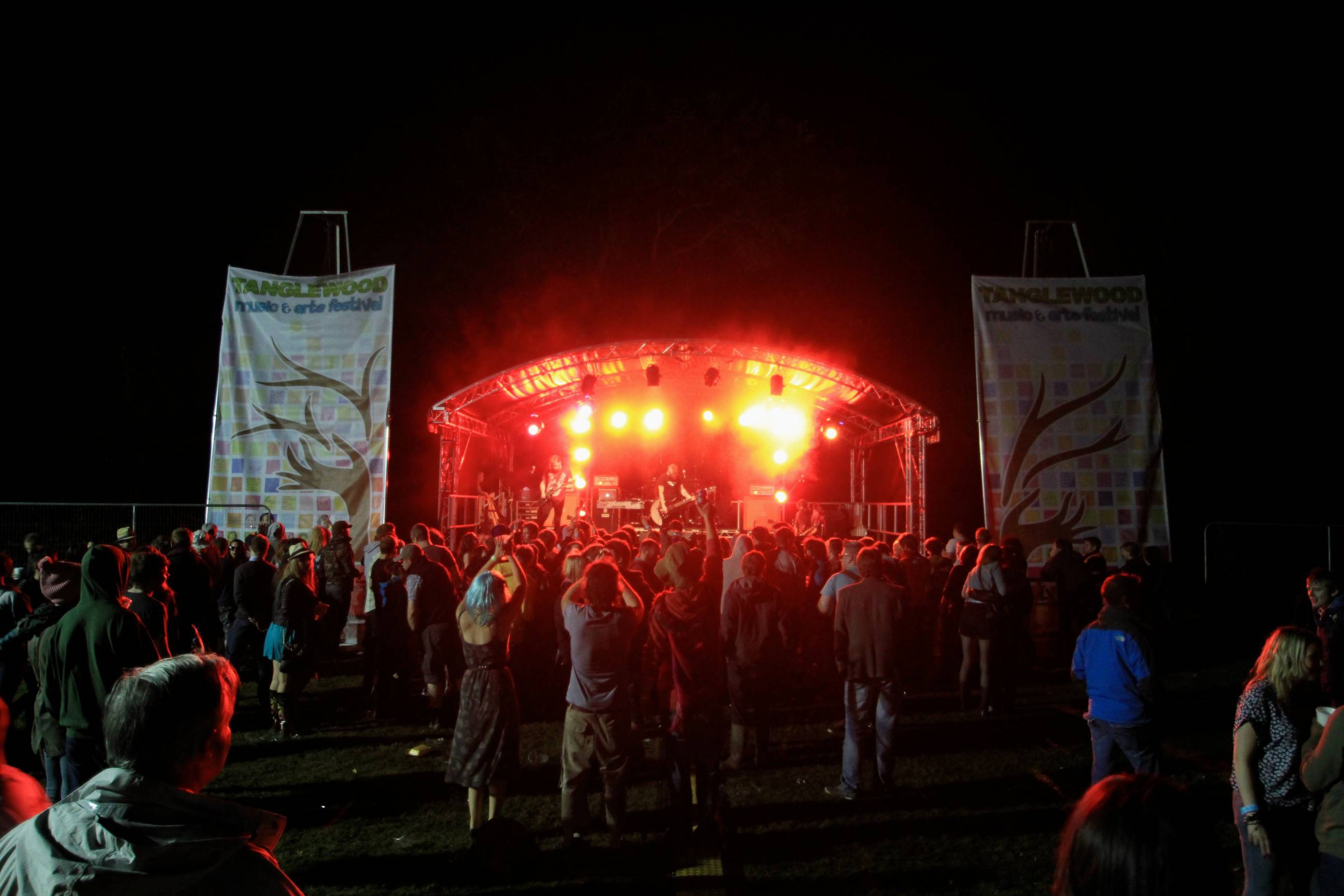 The incredible force of ASIWYFA’s set was an exact parallel to Pocket Billiards ska-punk repertory back on the HSS Spirit Store. A manic crowd condensed in front of the boat, rocked the earth as the band sent good time waves out from the stage. ‘Belfast Town’ still brings the house down harder than ever and they’ve finally found a way to incorporate an airhorn into their set – electronically. However Brendan Seamus’ inclusion looking after all the beeps and whizzes keeps their sound fresh. It’s a tight squeeze for all eleven on top the stage so no coordinated dance moves tonight. A circle pit ensued for their final number as the crowd are left begging for more. Jivers, moshers and pogoers accumulated to see Billiards finish off the night and their high octane brass powered setlist did not get stale.

Very much the new young contenders vying for a certain Draperstown fest’s local adoration, Tanglewood have a strong foundation to build on for the future. In a landscape of various quality festivals looking to make their mark we give props those behind this Co.Down fest for having the ambition to expand and develop their own personality. Real value for money for a very enjoyable weekend.

Find our photo gallery from the festival [HERE]