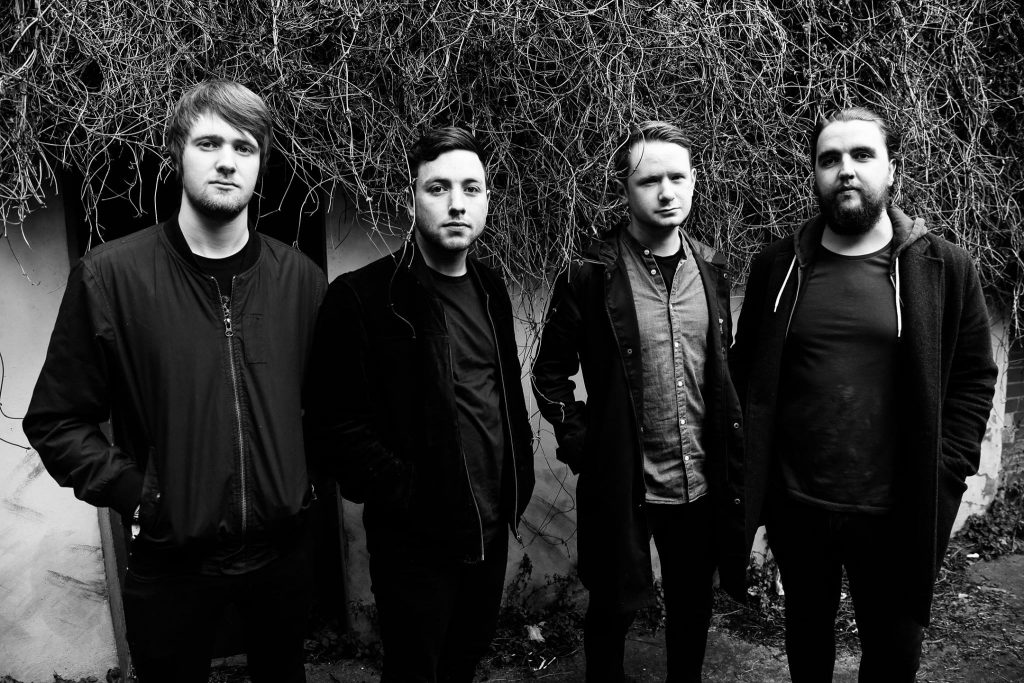 Those Lions with support from The Shout and James Downey
Tuesday 10th May 2016 – Bar Sub, Belfast

Bar sub has not been without it’s iconic shows, hosting a variety of musical acts throughout the years and along with Voodoo has long being a favourite of local bands for their EP launches. As of Tuesday the 10th of May, local indie upstarts Those Lions have added their names to the illustrious list. Like all small live venues it lent the bands playing that night a closeness with the audience. All around its a great locale.

The first act of the evening saw Jämes Downęy and his partner Graham McKinstry take the stage to warm the slowly growing crowd with their set. Their slow intro creeps slowly along, spreading its tendrils out throughout, as Downęy took the lead acoustic and vocals and McKinstry introduced a number of electronic effects via his sound board. Giving and electro acoustic prog rock vibe, they began to slowly interact with the audience before they exploded into their first song, ‘Father Son’. A blue grass tune that contrasts strongly with the darker intro, the empowering acoustics and emancipated lyrics combine to give you an impression that these guys like Foals. Like a lot. McKinstry jumped on the drum box after using his sound board to create a didgeridoo type effect playing over the back of the tune, which was received with mixed emotion.

Next song on the set list  is ‘Letter’, a rustic booming track that kept us interested and engaged. Ditching the sound board in favour of strong, steady beats, airy riffs and summer time lyrics, the pair now have the crowds full attention, just in time for them to launch into their next tune ‘Dancing through Eden’. Falling further away from their electronic origin, there is now much more of a Water Boys feeling. Steady, reassuring lyrics employee the audience closer as you can’t help tapping your feet. Unlike their other songs to this point there is a much more mature  sound around the two musicians now as they now show flashes of wisdom and capabilities beyond their years. Final song of the evening is ‘Dreamworlds Encounter’ saw the two explore a very suburban sound, showcasing uplifting vocals, lyrics and acoustics as the pair teased their potential.

After a brief interlude, The Shout were the next to take the stage. Featuring an engaging and outright front man. Bringing a much more punky feel to the night, with a tight set that featured aggressive, uncomplicated and uncompromising music.

Opening track ‘JFP’ (the full name of which shall be kept secret for matters of national security) opens on a fast paced head banging drum beat that got a few heads turned immediately. While the vocals felt a tad weak at points, lyrically the song was strong. Giving off a strong American new punk vibe with an up and down pace which compliments the instrumental action very well. Without a moments pause, The Shout immediately bombard the audience with their next song ‘The Runaway’ a no holds barred assault. You can immediately get the sense that these guys really like music and making their music, with their unrelenting riffs and drums making you vibrate in a good way.

After a strong start, the band continue from strength to strength. Third song ‘Wait For Me’. Tribal drum beats with a fierce Americana opening portray clear roots to Fall Out Boy and Blink-182. Emotive language strings you along while the guitarist shows his range. Punk melodies compliment the attack helicopter percussion extremely well. The Bassists thick lines hits you like a hammer as the song becomes worthy of moshing. Feed back heavy booming riffs and destruction oriented punk rock seems to be the theme of the night as the group continue their strong showing. As the show progresses The Shout play their heaviest two songs: ‘On and On’ with its machine gun ruff and bass/percussion compliments that have the bottles in the bar jangling int their fridges, the band come completely alive in the style of a poor mans Biffy Clyro, while ‘Beaver patrol’ proves to be their best song of the night, with an intrusive drum set that sounds like the beaches of Normandy. A short and sweet number that makes your ears burn and vocals that make you feel like you’re flying above the room make this the certified crowd pleaser for the band going forward.

Now with the audience in the palm of their hand, the band launch into their closing acts. ‘When We Were Young’ has a predatory opening riff that thrust you into the cage fight equivalent of a song, barraging the audience on all sides with hard hitting instrumental and lyrical prowess. Final song ‘Hans Grubber’ sees a return to the familiar punk vein with a splash of early AC/DC. Invigorating harmonic abilities from the singer really gets the crowd into their final act while the energetic drum set has us jumping around like madmen. A fitting end.

Then, it was time for the main event as Those Lions took the stage not long after. Featuring the talents of Colin Mallon (vocals), Gavin Kennedy (lead guitar), Ronnie MacCauley (drums) and Chris Byrne (bass), they looked and acted like the headline event. Using their indie hooks and ethereal beat, it was not long before they had whipped the crowd into a musical frenzy.

First song ‘Home’ plays on the ambience in the venue. Excitement builds as the group slash their way through the crescendo before leading on to second song ‘Golden’. Mallon informs us that we are being treated to an exclusive as this song wont be featured on the EP. Resounding drums quickly bring the crowd into this Strokes-esque number, as it maintains an authentic sound without becoming pretentiously modern. It is becoming clear that these guys are enthusiasts for the songs they write as they seem more excited about playing than the crowd does. A great pop number without the trappings, I was ravenous for more.

Next came 3rd song ‘Greek’, with its faced paced yet controlled licks and riffs rifles through the audience, taking many casualties. The combinations of tribal drumming and primal bass leads you to believe Those Lions are about to lose control but they graciously spare us before launching into 4th song ‘Take it off’. Easily their best song of the night, with soaring mix of U2 and ‘Vaccine’ melodies and riffs that makes your hair stand on edge, it sounds like it belongs in a stadium as it makes many in the crowd sing along to lyrics they don’t even know. Feeling like the start of something special with its otherworldly harmonies, it gives the impression of a vocal equivalent to a feel good movie.

While showing their musical range with their cover of ‘Naive’ by the Kooks that sounds all the part of the indie-funk original, it is the following song ‘Can’t Control’ that shows just how varied the band can be. Portraying a much different vibe with dark lyrics and dangerous vocal, Kennedy’s guitar somehow manages to sound lighter but denser at the same time. Like a hulking behemoth kept under the floor boards, the shifting levels of ‘Cant’ Control’ prove to be one of the crowds favourites for the night.

Like a carnivore that can smell blood, Those Lions use their next three songs to close in for the kill. ‘Hidden Truth’ sounds much more original than their other numbers with no clear roots or influences. Sounding like a well established band who very know why they are doing, Kennedy’s guitar squeals lead to smiles and cheers while the beats and bangs of MacCauley and Byrne makes us feel welcome as one of the family before blowing us away. Ensuing number ‘Wicked Game’ proves to be much slower and smoother. Thoroughly entrenched in blues as well as the indie genre, Mallon’s vocals combined with the groups musical aptitude work away at dissolving the collective musical mind of the congregation, taking us on a drowsy trip. Final tune of the night ‘Pushed For Time’ (apt name for a closer. ahem.) has an illusive start. While the pop undertones are audible they are more suggested than encouraged, much to the mass approval of the swelling crowd. Giving yet another sing along vibe only without the usual cringe factor, which easily compliments the vocal and instrumental harmonies. Combining this with now recognisable pop punk jives from the middle to the end of the song, you cant help but dance.