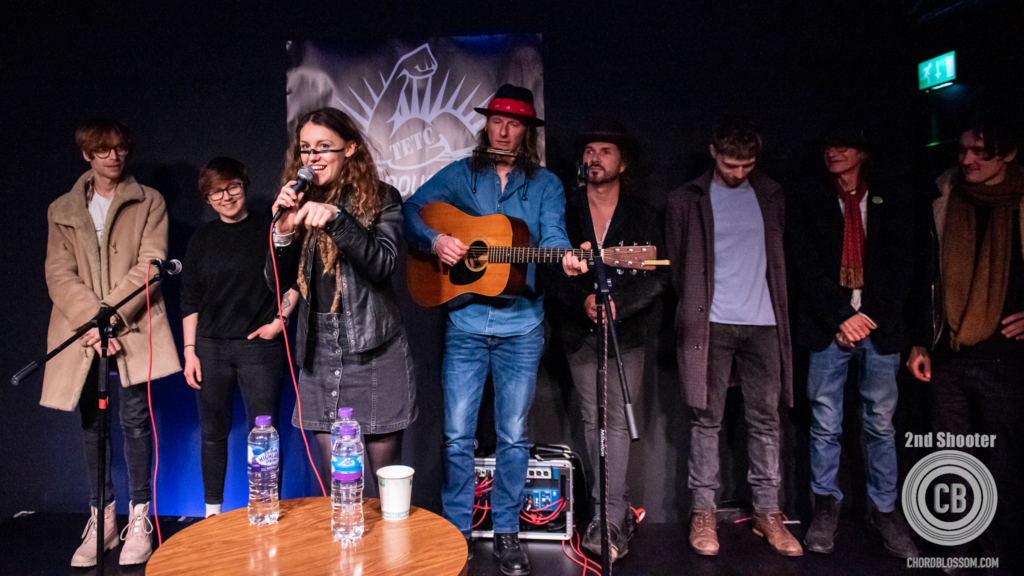 An intimate venue, a worthy cause and six of the best home-grown acts around? What’s not to love about the Tough Enough To Care fundraiser in The Accidental Theatre? Tough Enough To Care is a relatively new charity set up to promote awareness of men’s mental health issues; encouraging men to talk about their problems and to seek help and support when they need it. All of the artists on the bill take time to talk about their own experiences of mental health problems and how it has affected them.

It’s been a long wait to see Aaron Shanley perform live but he’s back and sounds as good as ever. The ethereal voice is still there on ‘Glitter Nails’ and his distinct sound and style are complimented for the evening by the sweeping steel guitar of Graham Bingham. ‘Break My Heart Slowly’ is a dream-like poem that transports you somewhere else. Shanley finishes his set with an oldie – ‘I Really Really Wish You Were Here’ from his 2012 album Please Tell Me The Clocks Are Lying. He plays this with more rhythm and drive and its great big chorus seems to sweep the audience up. It’s a treat to see him back, recording and playing like this.

Amy Montgomery is up next and she launches straight into the huge, powerful song that is ‘Constitution,’ banging out the chords on an acoustic guitar as she attacks the microphone. Montgomery is a full-on frontal assault on the senses, even playing solo stuff like this. She is joined by the ubiquitous Michael Mormecha on guitar duties for the remainder of her set and you really have to ask – is there anything this man can’t do? Montgomery treats us to debut performances of a couple of new tracks of which ‘Intangible’ stands out as being a very direct and honest piece of songwriting. Montgomery brings such energy and power to her performance that it is a pleasant surprise to hear her dial it down a little for ‘Treesong’, complete with Mormecha’s extremely delicate harmonies on the guitar. Amy Montgomery is a force of nature. Fact.

It might be harsh to describe Brian Houston as the elder statesman of tonight’s lineup, but he has been around longer that the other artists on the bill. Taking the stage clad in understated blacks and greys (right down to his hat and guitar) he wastes no time in launching into ‘The Valley’ with his trademark county/americana/gospel sound. He has a nice line in very bad chiropody jokes and achingly sad songs; when he sings ‘I’ll Fly Away’ he quietens the entire room. ‘Ivory Tower’ speaks to anxiety and vulnerability and as always, Houston brings drive and passion to everything he does on the stage.

After the break, it’s the turn of BECAH (Rebecca McManus). Hailing from Lurgan and displaying some fine guitar playing and song-writing she is a revelation. The voice is superb – clear, beautifully pitched and with a wonderful range.  ‘Yours’ opens her set and sets the tome for what is to come. McManus is quick to make fun of her songwriting, noting that she can only write sad love songs and that the only time she tried to write a happy song, it came out angry. We get a preview of her new single ‘Forget,’ full of delicate finger-picked guitar and soaring vocals.

Sam Wickens never disappoints and it was great to see him looking well and sounding fantastic tonight. The blues and gospel feel of ‘Lately’ blends into the quiet isolation of ‘Winter.’ Wickens is possibly the most heartfelt and honest performer around at the moment; he pours himself into every song and ends up totally captivating the audience. Every song ends with a hushed silence before the applause kicks in. ‘Ravens and Crows’ is a big and gothic song; full of darkness and snow. Wickens finishes on one of his most touching and haunting songs, ‘Oh Mother.’ Sam Wickens is sometimes compared to the late Nick Drake and on ‘Oh Mother,’ you can clearly see why. This performance was simply breathtaking.

All that is left is for a final blast of good old rock, roll and blues from Tony Villiers accompanied by the venerable Doc Docherty on lead guitar. Villiers has all the right musical references, telling stories about driving through Ireland listening to Henry McCullough before launching into ‘The Great Beyond.’ It’s a nice set this evening, relying on self-penned tunes rather than covers and songs while still nodding towards Bob Dylan and Tom Waits at times – Doc gets to take a few solos on acoustic that sound incredible. ‘Red Wine and Reefer’ is a good old blues tune that rocks along and Villiers finishes with the anthemic sing-a-long that is ‘Mexico.’ Well-received, upbeat, crowd-pleasing stuff.

And what of Tough Enough To Care? £1000 raised on the night to support the charity complemented by a short but informative talk from Dan Browning and a grand bit of awareness-raising all round. A big mention has to go to Mark Reid (AER Music) and John Davies (dootdoot music) for their work in organising and running this event. A top-class array of musicians, a great evening’s entertainment and all in a very good cause.