At first glance Rocket Propelled Gorillas’ front woman Jordan Catterson looks a little lost to begin but she soon finds her stride. Scuzzy rock is what’s on offer and it’s riveting, debut single ‘Clutch’ really comes to life in a live environment. Soon Jordan and the rest of the band look to be enjoying themselves in front of a reasonable sized Stiff Kitten crowd.  This is reflected in the music as the drum hits get bigger and the guitar and bass are also taken up a notch. In particular ‘On My Knees’ really offers the crowd a tasty selection of grungy rock riffs that wouldn’t seem out of place on a QOTSA record. They may not have walked away from the 2013 our Kickstart competition as winners but this band has a big future ahead of them. You’re going to see them on a lot of local bills as we head into the second half of 2013. 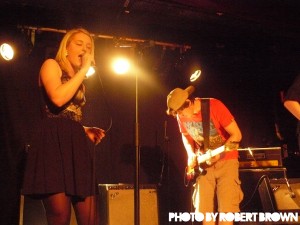 Often in the local scene you are faced with seeing some bands over and over again in the space of only a few months as they try and build a decent fan base. Runaway Go are one of these such bands but instead of cringing, I still find I am excited to see how they’ve grown. Their live set is tighter than ever and it really is full of great songs. Singles ‘This is Real’ and ‘I Would Go’ are both more than worthy of being chart hits with Dave and Fiona’s vocal harmonies soaring over electrifying indie pop. Although I do prefer the EP version to tonight’s rendition of ‘Delicate Man’ it still has the predictable effect of making the hair on everyone’s neck stand up. It seems criminal that this magical harmony hasn’t taken them onto bigger and better things. Although for purely selfish reasons I’m glad they haven’t drifted too far from Belfast yet. 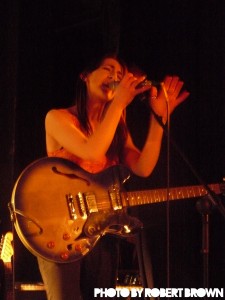 Shauna Tohill’s Silhouette haven’t played a show in Belfast in over seven months so it is nice to see a decent turnout in the Stiff Kitten. ‘Running Against the Wall’ sets us off with Shauna springing all over the stage with a look of glee plastered on her face. ‘Rip Up My Heart’ (the B-side to Can’t Keep Up) has an unexpected heavy intro that goes very much against their normal pop sensibilities and this may seem like a lazy comparison but it has a hint of Hayley Williams and Paramore about it. Highlight of the evening is ‘Toss It Up,’ ridiculously catchy and in my humble opinion the best song Silhouette have offered us to date. It is the perfect example of Shauna’s maturing song writing ability. Her on stage energy is electric and undoubtedly it helps that she is surrounded by some talented friends as she encourages us to sing-along. ‘Put the Silence on Hold’ is “made for ballroom dancing” according to Shauna, and it seems a shame that no-one partakes as this track off their debut EP shines. Naturally the set finishes with the ever present ‘Can’t Keep Up,’ and it seems that we still haven’t grown sick of it, as roars of “I Can’t Keep Up” drift off into the Belfast night. 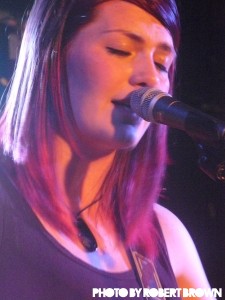