There is a saying that triumph arises from adversity and this gig totally proved that to be true. Seemingly blighted by problems including equipment issues and a last minute enforced line-up change the odds seemed stacked against its success. The unifying power of the local scene and its camaraderie and strength rallied strongly and prevailed. Two local bands on the line-up and both playing debut gigs injected a enthusiasm and vitality to the package.

Openers Voodoo consisted of a group of seasoned N.Ireland “ole hans”as we say… Established,experienced and seasoned pros but playing together despite the bands short existence. I had chatted to bassist Brian prior to the show,and he had spoke of a “natural chemistry” which had been effortless. Voodoo’s set consisted of covers, but whereas many bands playing that material merely go through the motions..they conveyed passion and natural enjoyment. Front man Stephen Watters exuded charisma and demanded audience attention. Coming over like a hybrid of Steven Tyler and Mick Jagger resplendent in hat and cane, the debonair showman with a devilish glint in the eye. Guitarist Dave McClean showcased his virtuosity and individual talent on songs by Clapton and Hendrix. If you are going to cover guitar legends tunes well then you better be able to step up to the plate. Stirring renditions of familiar tunes were aired with authenticity but also a fresh and new approach. The strong rhythm section nailed down the beat as both fellow band members and an increasing audience fell under their bewitching Voodoo spell with their powerful set. It was a delight to witness first hand their debut show, and I’m sure that the buzz and interest arising from this show will herald good times ahead for this local brand of enchantment. 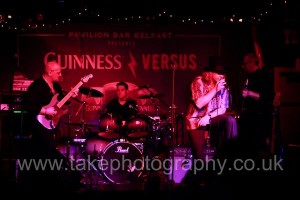 Black as Heaven were next up, another Belfast based rock band who had been moved up the bill at the eleventh hour. Several members had served their apprenticeship in the local music scene but progress to date had been limited for varying reasons. Their debut gig was therefore much anticipated and eagerly awaited. Their set again consisted mainly of rock standards which were familiar to all audience members . However choosing to cover acts such as Motley Crue and Ozzy Osbourne were certainly not easily to vocally replicate. Vocalist Mark Gracey must therefore receive kudos for doing a sterling job in successfully covering the wide octave range of such artists. Ably backed by a tight backing department which also allowed the technical guitar prowess of Gareth Beattie to shine brightly. What an incredible talent this guy is,at such a youthful age also-definitely one to watch for the local rock audiences. The two band’s own compositions which were aired in the set gave a sign of a future direction for the band. Both stood out amid the covers and I hope that the band will soon be adding to their arsenal of self penned firecrackers. My own criticism of the set was that I would have like the band to have played for longer. Definitely think that the band has a very bright musical future ahead of them, and look forward to seeing them more frequently out on the road and performing live for the local rock community. 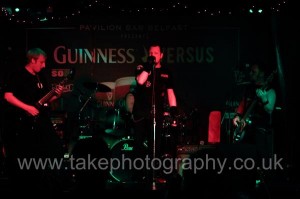 Headlining band for the evening where retro rockers and recent Classic Rock “best live band”winners Voodoo Vegas from Bournemouth. I recently completed an interview with the band for another publication but was eagerly anticipating their N.Ireland live return. The current media buzz on this band is massive with several high profile support tours and festivals already behind them and their star is clearly on the rise. Having a beautiful female guitarist may have been an attention diverting exercise but definitely not in this case. Front man Lawrence demanded ,and cajoled an audience reaction and response; presenting a fiery and passionate drive and enthusiasm. Indeed he left the relative stage security on several occasions to get literally in your face with the audience. A man that was clearly born to entertain. 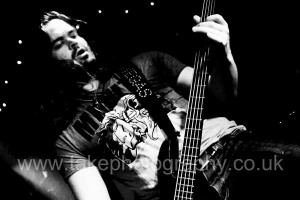 The set consisted of many of the “Rise of Jimmy Silver” album songs,which I’ve been living happily with for several weeks now. Utilising harmonica for several songs gave the tunes a blues tinged touch which delivered a fresh edge in the live setting. Highlight of the set for me was the emotive ‘Lost in Confusion’ which presented a different and more melodic element to the bands sound. The audience were instantly won over by the set of powerful rock driven anthems delivered by the band. Sing-alongs frequently became part of the evening. Generally the band delivered a feel good and Saturday night party vibe that was lapped up by an enthusiastic N.Ireland audience. Seeds have been sown and from the chats that I had with the band following the show I think that a quick return to NI is definitely on the cards. 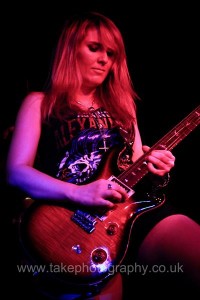 The evening in conclusion was a huge success for the Black Cat PR sortie into gig promotion. Great attractive mix of a UK band on the rise together with two new local newcomers playing successful debut shows. Audience feedback was universally positive,and I’m sure this particular Cat will become a mainstay of the local live promotion community. 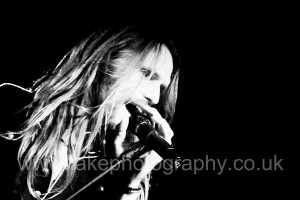