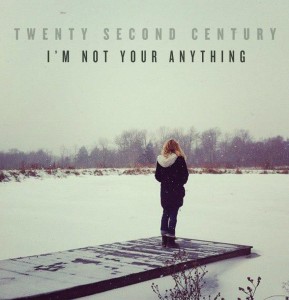 20 Second Century are a four piece pop-rock band from Banbridge, Co. Down. This EP is the second the band have released and was recorded and produced by Rocky O’Reilly at Start Studios in Belfast. The 3 track EP was recorded while the band members were still at university and their plan is to release an album in the near future.

‘Gravity Take us Home’ bursts this EP straight into life with a sound comparable to early Blink. It is a catchy fun fun track that would be at home on any teens playlist. Though the track is more than just for the teens I have it on my own! ‘Hollow’ is harder than the first track and would remind you of a Sum 41 track with an easily followed chorus with a break to mosh in the middle, then slowing down before building to a crescendo. It’s another fun track to jump away to.

If I remember rightly closing track ‘Natalie’ is a song about one of the guys first love. It’s a messed up teen love song, something you could very easily see All Time Low perform. I was fortunate enough to see these young guys at Volume Control earlier on in the year and they are a teenage dream, a Northern Ireland All Time Low with a mix of Sum 41 thrown in for fun. I only see big things ahead for the boys from Co. Down.