Able Archer are a five piece band hailing from Dublin making rock music despite the obvious handicap of  their lack of “ironic beards or cardigans”. The band has been around for a couple of years with Bullets their debut EP. 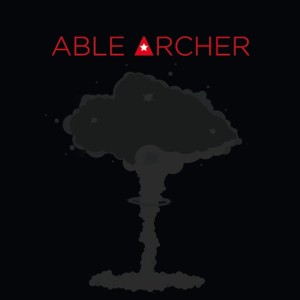 The band clearly take influence from the melodic and the alternative styles of rock. This is immediately apparent on the EP opener, ‘SuperHuman’ which begins with echo-laden guitar, reminiscent of U2 or perhaps Foals. It’s the guitar part that is the stand-out on this track along with a powerful drum beat. Still it’s Emmet McCaughey’s vocals that move the song on with a chorus that’ll stick around after a few listens. The title track ‘Bullets’ moves in a similar fashion with some heavier parts in the chorus. The song has the sound of 90’s alternative bands such as Soundgarden or Nirvana but certainly with a lot more studio polish. Emmet laments on the chorus, “And I don’t have enough bullets for everyone”. The guitar in the bridge is a particular delight despite it’s brevity.

‘Patches’ continues the formula with melodic guitar introducing the track and keyboard sounds supplementing the verses. The chorus parts kick in with vigour while the band back off again for the verses. The 90’s influence comes out once again on the final track ‘The Great Henry Watt’. The guitar/bass riff paired with powerful, tribal drums could come straight off one of Pearl Jam’s first two albums. This is to my mind the strongest track on the EP. The chorus is big and the outro drives the track on to one last flourish, ending the EP. The Pearl Jam influence is again evident on the chorus with the vocals sounding a touch “Veddesque” in a great way.

Bullets is a solid and polished EP delivered by a confident band. Able Archer manages to mesh together alternative rock riffs and vocals similar to the likes of Pearl Jam with the melodic tones and polish of U2 and Depeche Mode. The band deliver all this in four short tracks which suggests there will be more to come.