Aggressors B.C – The Tone Of The Times 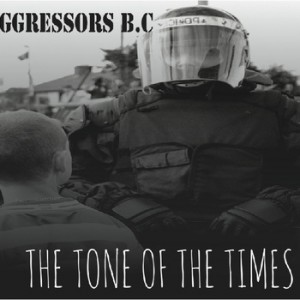 Further proof of how there’s much, much more to NI punk than Good Vibrations. On the go since 2009, Aggressors B.C consist of members from Runnin’Riot, Pocket Billiards and Boss Sound Manifesto. They’ve gigged relentlessly around the city for years (this reviewer remembers seeing them at the opening night for The Warzone in 2011. Seeing main man Marty Riot made up as Coco the Clown was a sight to behold). Surprisingly, this is their first LP.

Title track opener ‘Tone of the Times’ begins with drumming reminiscent of The Clash’s ‘Janie Jones’ before going into a spaghetti westernesque riff. Then the ska comes in and the skanking begins. It decries the socio/political situation that the people of this country find themselves in every day and makes you dance at the same time. As an opener, your attention is grabbed.

‘True Skin’ is about the futility of racism and alternates between ska and mid tempo reggae with a very tasty wah pedal sound thrown in the mix. ‘What She Gets’ is a more light hearted romp which has more than a hint of Hall & Oates in the chorus! ‘Plight’ is the first full on reggae number and sounds like Ruts D.C backing Big Youth. It’s slow tempo allows the pathos of lyrics to come through.

Closing with ‘Life 101’, it’s delicately picked strings hint at a more introspective mood. It’s one of the few songs that highlight the call and response vocals of Marty and Patreece as they both assure the listener that life is shit, but you have to persevere. It’s an empowering song. It reminds you of the old Buddhist quote: “To conquer oneself is a greater task than conquering others.”

It’s not surprising that this is a confident, well written and well produced LP. With the pedigree in the band, you weren’t going to get anything amateurish. The long gap between their first demo and album also suggests a desire to craft the songs until they were taunt and immediate (although commitments with the main bands would have had a lot to do with the delay as well).

It’s not without it’s faults: the track listing could be trimmed to ten songs, Marty’s vocals are often too prominent in the mix which means the vocal interplay between him and Patreece (such a big part of their live appeal) is downplayed. Finally, the cover: while this reviewer suspects that it’s a homage to ‘The Ungovernable Force’ by Conflict, it is lazy and non descript. Surely the band’s logo (a capital A gone 2 – Tone) would make for a more striking and original cover?

However, these faults do not detract from an album that was well worth the wait. Bouncy enough to keep the indie kids happy, and political enough for the punks.

By all means, study and revere the rich heritage of NI punk. But don’t overlook the current bands who, not only are adding to this heritage, but also ploughing their own furrow.

Carousel – Where Have You Gone