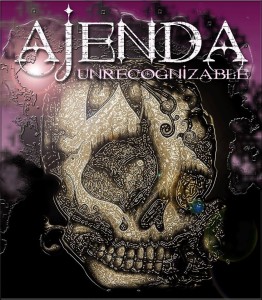 I first heard of Carrick-based four piece Ajenda a couple of years back when they released their promising, if inconsistent, Suomi Sessions E.P. The E.P. showcased their fine musicianship, Jenny Walker’s sultry vocals and, the stand out tracks on the E.P. ‘Drinking Games’ and ‘Hollow’ (which also appears on ‘Unrecognisable’) showed the band could write infectious Pop/Rock tunes. I have also had the pleasure of seeing them live on 3 occasions and have never been disappointed in what I saw and heard. They are a proper band.

Ajenda very much promote themselves to a Rock audience. They have a Rock image, they tend to play the main Rock venues and concentrate a lot of their promotion on Rock platforms. This means the band walk a tightrope between Rock and what would be seen as a more commercial style of music. It’s not an easy feat. Rock fans (especially British ones) have a habit of turning their backs on bands if they get a whiff of ‘selling out’ and Pop fans (especially British ones) tend to ignore bands that have a Rock image. It is only really in the U.S. that they seem to have a much more broad acceptance of Rock that has pop sensibilities and Pop that Rocks, even if the Hair Metal days of the late ’80’s are gone. So Ajenda face a conundrum as to how they market themselves. But if their strategy was to just write an album full of great songs and see where it takes them, then part one is more than complete.

‘Unrecognisable’ stays very much to the melodic side of Rock with just enough geetar and punch on songs like album opener ‘Dirty Rock n Roll’, ‘Tattoo’, the title track ‘Unrecognisable’ and the vitriolic ‘Hatred & Greed’ to be acceptable to all but the most heavy of Metallers. Guitarist Gavin Cairns is a skillfull player who comes up with interesting, often intricate, riffs and licks on electric guitar while showing his all round skill with some dextrous acoustic work. He is ably backed up by the Slovakian rhythm section of Peter and Janny. This gives the album a real ‘played’ rather than constructed feel, as shown on the title tracks with the interplay between the musicians. This again should discourage any doubters that this is a real working Rock band.

What gives them a commercial edge is their ability to get some sort of a hook in each song, be it a great chorus, pre-chorus or refrain. This is shown to perfection on ‘Tattoo’ which has the lot in terms of hooks, with the ‘don’t mention love’ refrain being particular catchy. In Jenny Walker (the ‘Jen’ in Ajenda) the band has an absolutely top class talent. She has a wonderfully husky voice with such great tone that she can put life into even the most obvious of melodies, but also has the ability that can take a song where it needs to go. She shows a real understanding of her own voice and how to control it. She is the voice of the band; the focal point and rightly so. Jenny is key to the ‘sell-ability’ of the band – not in the obvious/cliched ‘let’s focus on the pretty girl and get the rest of the band to take a step into the background’ a la No Doubt’s ‘Don’t Speak’ video. No. She is key because the songs she sings so brilliantly will endear her to men and women alike. Women will identify with the issues she sings about and men will be attracted to that edgy, damaged good-girl-gone-bad persona that comes through. Songs like ‘Tattoo’ and ‘Paranoia’ encapsulate this perfectly.

As I’ve said, there is no doubt about Ajenda’s Rock credentials – its reputation among local Rock fans, is intact. But ‘Unrecognisable’ is an album that has several songs that have a real crossover appeal to those who aren’t necessarily Rock fans. Even a casual listen to Kelly Clarkson, Anastasia and some of Pink’s early material shows that several mainstream American Pop acts tread very closely to Rock music. And there is no doubt in my mind that even the rockier ‘Hollow’, ‘Paranoia’ and ‘Tattoo’ have that crossover appeal, nevermind the more obviously commercial ‘Heaven’s Tears’, ‘Fragile’ and especially ‘The Other Side’. That may not necessarily be what the band wants to hear but I don’t say it as a criticism, nor do I believe Gav ‘n’ Jen have set out to ‘be commercial’. Their style of songwriting is natural, unforced and in no way is a copy of anyone in particular. There is a balance, there is a variety of textures and feel. Songs likes the wonderfully atmospheric ‘Tattoo’ (my personal favourite) and ‘Hollow’ have so much class and are so memorable after little more than a couple of listens. They should be proud of what they have achieved.

‘The Other Side’ in particular is a beautifully crafted song. I can’t imagine anyone hearing it coming through their radio speakers being anything other than smitten. It may not fully represent what the band is all about, but neither does it stick out like a sore thumb or smack of the band trying to be something they’re not. After all, Rock artists have long had the reputation of producing top class ballads, as far back as Aerosmith’s ‘Dream On’. Why should this particular Rock band be any different to Extreme, Foreigner, Bon Jovi, Heart etc?

‘Unrecognisable’ has everything a quality melodic Rock album should have. It has the Rock, but also the accessibility. It has the riffs but also the choruses. It has great band performances but also enough production to smooth the rougher edges: As a Rock fan, there were times I’d like more guitar or a thicker guitar sound, but that’s nit-picking really as overall the balance is just about right and, given that this was self-funded, stands up very well to scrutiny.

I want Ajenda to do well. They work hard, they stick to their guns and believe in their music. It would have been the easier thing in the world to just do another E.P. for the cheap exposure, but they had the belief in the quality of these ten songs to put them all together in an album. If there is any justice in the world of music (which I know is a long shot) Ajenda should be right up there. With ‘Unrecognisable’ they have given themselves a great chance of being taken seriously by the industry. I would hope someone in the industry sits up, takes notice and steps in. In the meantime, get out and see the band and get your copy of this terrific album.

The album is officially launched this Saturday, 24th August at the Limelight in Belfast. Be there!