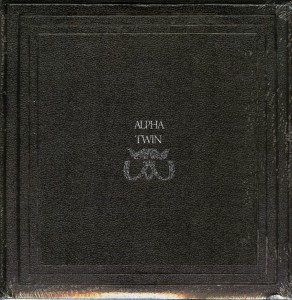 Followers of Royal Blood and Nothing but Thieves secret revolution against indie bands and other manners of ‘fluff rock’, stand up and be counted. You are not alone. The Screech Rock revolution has come, and I do not use the word screech lightly. Any human can scream but it takes a certain primal being to screech. Herbivores scream. Predators screech. If you are a predator in this war against quiffs, suspenders and smoking jackets, take your place at your closest Alpha Twin gig, kneel down in prayer and screech Hallelujah.

Homegrown rockers from the Northern capital, Alpha Twin (AT) consists of singer/guitarist Tomas Fisher, master of all things stringed and wooden, bassist Eoin Bannon, musical jack-of-all-trades and Belfast’s own answer to Keith Moon, Andrew ‘Andy’ Mullan, a line-up that would mostly likely be seen on the wall of the ‘PSNI Most Wanted’ in any other life. The gig-heavy set of the band has earned the respect of Belfast’s budding underground rock and metal thanks to their new EP and one of the  most exciting live sets on the circuit, as every gig can have anything from a rendition of super-cover ‘Feeling Good’ (as preformed by Muse) to Electric Six’s ‘Gay Bar’.

The self titled EP ‘Alpha Twin’ showcases the bands three original numbers. ‘Erosion of the face’ does exactly as it says on the tin, a four-minute attack on your senses that leaves you numb and calling for your mother. A Strokes-esque opening soon gives way to a full frontal Royal Blood style pounding of the nerves that culminates in a breakdown that would bring a smile to the face of Tom Morello. ‘Deep Zen Pill’ beckons to the heavier of ‘The Black Keys’ repertoire with prehistoric drumming that threatens to shatter the unworthy, before crescendoing into a celtic fury reminiscent of Thin Lizzy’s ‘Emerald’. However, while polished and impressive the EP leaves something to be desired in the first two songs. dangerous and exciting yes, certainly but somewhat “safe” and all together too similar to be enjoyed to their maximum potential. While fans love the feeling of being assaulted during the listening, the EP remains that of standard stock (Not quite  a crime for a band on the rise or for a first attempt).

This would be true if it were not for the last song of the EP. ‘Rhythm Meth’ like a venus fly trap, lulls you into a false sense of security, with its thick, groovy bass line opener, before Mullan’s drums bellow into the foreground. It is only then you realise your mistake. Like the herbivore you are, you are caught in the trap. Fisher snarls into life after an opening that bears a striking resemblance to the venom of Led Zeppelins ‘Immigrant song’. Dark and dangerous lyrics abound in a howl that would not look out of place on an early Muse LP before the song descends into a dark, psychedelic chaos. Veni. Vidi. Vici.

A band that does not have the most unique or original voice in the world, but a voice none the less, that demands to be heard and shall not be denied, Alpha Twin are to be neither underestimated nor trifled with if you value your mind.

Watch: Rews – Can You Feel It?