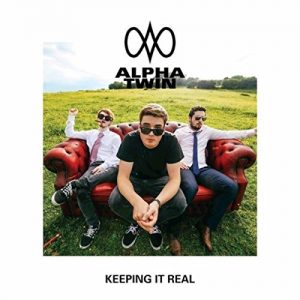 Although not far removed from their first EP, what Zeppelin puppers Alpha Twin lack from other bands n experience they more than make up for it their unique firebrand style of music. Going from strength to strength since there self titled debut EP, they have gigged relentlessly, won the Guinness “Battle of the bands” and performed at Sunflowerfest. In the meantime have taken the opportunity to write an EP that, frankly, blows their last effort out of the water due to marked increase of talent and comfortability in their musical membranes. Using what they have learned since their debut, there is both tangible and visceral changes in both writing.

With its 70’s inspired riff opening ‘Ecstasy’ starts as they mean to go on: hard, heavy and in your face. Coming out of the gate firing on all cylinders started the first of the body shivers before Fisher (Tomas, Guitar and vocals) seems to channel the spirits of an Apache war party through his guitar as he lets loose a 15 second outburst of pure malice. After this initial onslaught you realise that constant reverberation in your head is coming from the bass of one Eoin Bannon, and it is a case of “once you realise, you cant ignore”. Unusually, the bass hits harder than even the drums to the point where you can almost see the room rattle from your headphones. Class.

One particular nuance that fans are quickly aware of is the marked increase of talent and ability in the vocal department. Fisher has really come into his own sonically, with vocals dripping wet with delightful vengeance and toxic lyrics that any Sabbath fan would be proud off which compound the new darker themes of the EP. As the song continues on, so does the assault which refuses to lessen. Riffs descend on hapless listeners like tomahawks and the breakdown portals an image of a B-52 screaming overhead. On a pleasing note, the group have managed to avoid the pitfall that other young bands seem to fall into during production in mismanaging the balance between instruments. Any fan of music, not even the band, would appreciate the fact that at no point have any instruments been undercut, giving an ingrained sense of synergy and chemistry between the members.

Obviously familiar to old fans, the confidence still remains evident in the way Fisher, Bannon and Mullan (Andrew, drums) brandish their instruments like spoils of war, constantly unloading invasions of the ear drum. The one thing that hasn’t changed between EPs is that these songs still fell like they are built for live shows, a style that makes Alpha Twin sound twice their age. Before you are given a chance to recover from the first frenzy, in strolls ‘You Make Me Feel Down’, easily their best written material by a wide margin with its only downfall being that it burns out as fast as it does bright. Like a Firework, the brief explosion of colour and noise makes up for the lifespan. For the second track in a row, Fisher flexes his lyrical chops but ultimately it is the backup singing harmonies that make this song. Frenetic drumming and heart attack riffs compress everything that Alpha twin are in under two minutes: near crazed rage, border line unlawful licks, bass grooves that you can chew lumps off and Mullans signature style of launching Howitzers off his drum kit.

It is clear after one listen that this is the song that will bring the new fans in. Rest assured they shall come, they shall ask and they shall receive. The root of the success conclusively comes from the ability of Alpha Twin to transport the energy and ambience of their live shows into a 1 minute 48 second song that has one clear objective: Find our enemies with the Bass, scare them with our percussion and smite the with our riffs. As complete a song that they have written to date.

Now comes the grand finale, which does not quite reach the heights of ‘You Make Me Feel Down’ but still reaches for the nebula none the less. ‘Audio Bomb’ proves to be the most mature of the three, with the entire demeanour of the group changing almost instantly, going from energetic, adrenaline fuelled madness to nicotine stained veterans in under 30 seconds. This controlled change fully demonstrates that this is a completely different band from last year. Lyrically the most impressive number on the EP, but the most impressive factor is the bass which continues to be the driving force behind the new changes. The constant, consistent groove provides the band with it own unique heartbeat that is never more prevalent than in ‘Audio Bomb’.

Despite all this new change however, there is still evidence of the old rabble rousers present. The savage breakdown (literally) screams vintage Alpha twin, showing they haven’t forgotten their carnivorous sensibilities. As the crescendo begins, you become suddenly aware of muscles tightening around the neck as Fisher, Mullan and Bannon roar into action with blistering second after second, to the point that if you are not head banging then you must be a quaker. The sense of synergy remains constant throughout the entirety of the EP and it is clear that the teamwork isn’t just skin deep, as Fishers solos no longer overshadow the talent of his bandmates.

Easily eviscerating their first EP as regard to both inventiveness and initiative, Alpha twin prove that they are more than a one trick pony and demonstrate to fans and non-fan alike that they should be excited for the future. and scared. Very scared.