And So I Watch You From Afar – Heirs 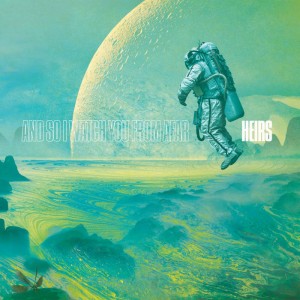 Northern Ireland’s favourite sons have returned. With the much anticipated follow up  to 2013’s ‘All Hail Bright Futures’, the Belfast four piece are back at it with ‘Heirs’. The most talked about album release of this year. It’s been a busy time for the guys. Their last album cycle saw them touring the world in the only way they know how, getting in the van and playing all corners of the world. Supporting Nine Inch Nails at Belsonic and performing at the world renowned Reading And Leeds festival.

By the time you read this, ASIWYFA will have released the album, have a few sold out shows of their recent tour under their belt and be gaining new fans left, right and centre. Recorded at Start Together studios and with Rocky O’Reilly at the helm, the band have upped their game. Picking up the urgency and sheer frenetic fretboard work of their last album, ‘Heirs’ starts off by kicking down the musical door with ‘Run Home’. With the songs title being the main vocal point of the song, the riffs and drums pulsate relentlessly. A fantastic start which paves the way into ‘These Secret Kings I Know’. On first listen of the album one thing is evidently clear. There are more vocals. Now, a few fans have criticised the band for introducing a more lyrical approach, especially on their last album but i, like many of you, welcome it. After all, bands have to progress and this is something ASIWYFA have done on this album.

‘Wasps’ is sure to be a sight to see performed live. ‘Redesigned A Million Times’ sees Ewen Friers (of Axis Of, like you didn’t know) offer up his voice for the song. It has an ‘All Hail’ vibe to it and a synth section which is reminiscent of The Postal Service. ‘Fucking Lifer’ is sure to get people moving in a live setting with Chris Wee’s drumming holding things down and complimenting the guitar and bass perfectly.

‘A Beacon, A Compass, An Anchor’ and title track ‘Heirs’ are the longest songs on the album and showcase what the band are all about. Epic landscapes in which these songs live. It’s easy to get lost in their songs as there’s  always so much to discover and after listening to this album many, many times already, i’m still finding new things. ‘Tryer, You’ closes the album and leaves you with that familiar feeling from their previous efforts. The feeling of wanting more.

ASIWYFA are a band close to the hearts of the Northern Irish music lover. Anyone who has seen them live can attest to this. This album is surely to be well received with open arms from the fans. And when they play Mandela Hall on the 20th June, there will be many in attendance and they’ll be singing along. Yes, singing. All Hail Heirs.

Tags: And So I Watch You From AfarASIWYFAHeirs
ShareTweetShareShareSendSend
Previous Post