And So I Watch You From Afar – The Endless Shimmering 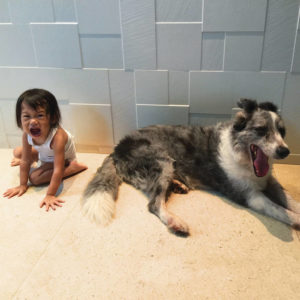 Just a few days until the hugely anticipated release of And So I Watch You From Afar’s fifth studio LP The Endless Shimmering.

Building 9 tracks over 9 days in snowbound Pawtucket, Rhode Island, four of Ireland’s most-acclaimed post-rockers return with an album born out of instinct, centred on a shared, honest, fearless passion for performance.

Bassist Johnathan Adger describes the recording process: “we laid everything bare and put everything we had into the songs, and we hope people can feel that and use that without us having to be to overt in how we present it. The album was charged with a lot of what we were all going through as individuals, but we wanted to allow it to become people’s soundtrack to whatever they need in their life at this moment.”

The cover art is no less earnest, a candid snap taken by drummer Chris Wee’s friend of his daughter and family dog. No trace of Tim Farrell’s notorious logo for the band, now a cult symbol for Irish musicians. Although at this point, it naturally assumes its rightful spot in the back of our minds anyway.

Accompanied by a 42-date tour across Europe, the new album is set for release via Sargent House on October 20th. As part of it, they’ll be returning to the UK in November, where they’ll be playing in London, Manchester, Glasgow and Bristol before heading to Dublin, Co. Mayo, Cork and Galway in December – and don’t worry, we’ve got our finger on the pulse for that mysterious Belfast date.

Eager to hear how Ireland’s most-acclaimed post-rockers have grown in the two years since their previous 2015 release Heirs we sit back, clear our minds, and press play.

A band skilled in the craft of the ‘epic’ instrumental, evoking alien landscapes through technical panache (from the synths and sampled drums of All Hail Bright Futures, and the otherworldly group chants of Heirs) The Endless Shimmering is the sound of the band returning to Earth.

This abstract expressionism gives way to pure, unbound expression and we’re left with something that stands less as a portrait and more of a reflection. Lead guitarist Rory Friers describes their time in Machines with Magnets studios, how the band “tracked, ate, washed and slept at the studio, and 9 days later we had recorded and mixed the entire album just as the snow began to melt.”

The instrumentals are ceaseless, contemplative, and still impossibly cool. Standouts are the album’s lead single ‘A Slow Unfolding Of Wings’ and the overclocked pace of ‘Mullaly’, where Friers’ legato and tremolo picking rings out as natural and carefree as birdsong. Renowned for drummer Chris Wee’s visceral rhythms, the band make use of more delicate, experimental percussion in cowbell, woodblock, glockenspiel, and even strings find their place in the composition at the end of ‘Dying Giants’.

Immediately clear to any previous listener is the move away from vocals. Returning to the freedom of their instrumental roots, almost by instinct, what we’re given is the purest reflection of Rory, Niall, Chris and Johnathan as performers, a place where they truly shine.

MTV’s short-lived IGGY once featured Friers as part of the ‘Next Generation of Guitar Heroes’, commending the Irish artist on his skill at communicating with a guitar alone:

“(He) displays an ability to speak without words that is especially welcome considering ASIWYFA is an all-instrumental band. Admittedly, we don’t have any idea what he’s talking about, but you have to love the way he says it.”

If And So I Watch You From Afar has ever been a band that couldn’t find the words, it’s clear now that they no longer need them.

Tags: And So I Watch You From AfarASIWYFADan BrownThe Endless Shimmering
ShareTweetShareShareSendSend
Previous Post