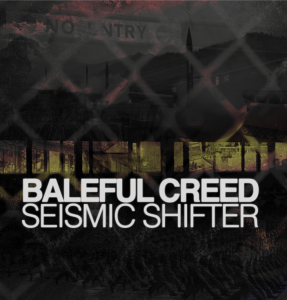 Local Metallers Baleful Creed have been around for a good few years now and while they perhaps have never been considered top of the food chain of local Metal bands, they are a welcome addition to any local Metal bill. That’s not to say either that they don’t have some stellar moments, as their eponymous debut album showed a few years back. When BC are good, they are very good and songs like ‘Illuminati’, ‘Mysanthrope’, ‘Thorazine’ and especially ‘Autumn Leaves’ are some of my favourite songs by any local band. For me those songs showed the way how a band, clearly influenced by Sabbath and Danzig (among others), could find their own pocket of space and be Baleful Creed and not a tribute band. The debut was a little patchy in terms of maintaining the quality of the songs I mentioned, which I put down to it actually being a cobbling together of remastered previously released E.P.s.

So, while I was not expecting a reinvention of who Baleful Creed are, I was expecting a lot from their second album ‘Seismic Shifter‘. I expected the band to match and even raise the bar that had been set by the many good moments on their debut. I was certainly not expecting a seismic shift in style, content and feel: I was expecting to hear John Allen’s monstrous Iommi-esque riffs and lead breaks, I was expecting to hear Fin Finlay’s garrulous vocals which sound like he gargles every morning with whiskey and bleach, I was expecting more of his interesting takes on life via his lyrics, which are never dull, and I was expecting a rock solid rhythm section to underpin it all – even though it is a relatively new bass and drummer combo of Davy Greer and Dave Jeffers. But I was also hoping to hear a real honing of their sound, an improvement in the overall quality of songs (at least matching those 4 songs I mentioned) and some of the more clumsy lyrics that hamstrung the first album in places being improved upon.

Were these hopes fulfilled?

I won’t keep you hanging on to hear the answer like it’s the result of a T.V. phone vote. To a large extent my hopes were fulfilled. ‘Seismic Shifter’ certainly is a more consistent album than its predecessor and it is an album I have enjoyed listening to over and over as I gathered my thoughts. In fact, the more I listened, the more I found myself humming the tunes under my breath when I wasn’t listening to it, and it wasn’t always the obvious songs that I was humming. That is a good sign for any album.

The album starts off strongly with 4 belting slabs of grungy Metal.  Essentially, musically anyway, Baleful Creed tread a similar path to bands that were labelled as Grunge in the 90’s, bands like Soundgarden and Alice in Chains; earthy, gritty, dark, atmospheric. But Baleful Creed still retain that dark mystic approach that Black Sabbath had in a lot of their songs – that strange mixture of being anti-religion and yet moral, and songs like ‘Devil’s Side’, ‘Forgiven and ‘God’s Fear’ (3 of the first 4 songs on the album) are very much steeped in that tradition. Sandwiched in the middle of that is ‘Faux Celebrity’ which is a welcome dose of straight commentary of modern life.

‘Grind’ and ‘Levy’ show a very different side to the band. Not musically, musically they still use that grungy, riff-laden template, but lyrically the author delves into the erm, sexier side of things. I dunno about these; great tunes, catchy. But I guess my Presbyterian guilt kicked in and make me feel a bit awkward listening to some of the lyrics. I guess that’s my issue not theirs, right? My awkwardness continued through the next song ‘Lose Religion’. Sung by Davy Greer, it pulls no punches with it anti-organised religion lyrics. There’s such a great echo of Soundgarden in the music, and I am not sure the lyrics, no matter how much I agree with them, matches the quality of the music. But again, maybe the simplicity of the lyrics is fitting – no more fitting than in the aftermath of the Manchester bombing.

The album finishes very strongly. ‘Momento Mori’ struts like the musical equivalent of John Wayne striding towards his horse on the way to take down another bad guy. ‘Walking Wounded’ takes the pace down a notch, hitting a real ‘stoner’ (hate that phrase but you know what I mean) groove. Fin’s vocals excel here, finding extra depth, before reverting to that fierce growl he has perfected. Album closer ‘The Wolf’ springs a wee surprise with a Jon Lord-esque hammond organ sound providing the canvas for a real album highlight – but don’t worry, Allen still manages to insert a classic Iommi-esque guitar break mid-song – would be rude not to.

My overall impression and conclusion is that while ‘Seismic Shifter’ perhaps doesn’t have an ‘Autumn Leaves’, it is a far more consistent album than its predecessor. The band sound very confident in who and what they are. It’s also an album I’d class as a ‘grower’, perhaps due it lacking that one absolutely stellar song – but that’s a good thing. I’d take consistency any day over a one-hit-wonder (possibly because I’m an Arsenal fan) because it means this is an album you’ll want to put on again over time, instead of just ripping that one song off and forgetting the rest (*cough* Foo Fighters *cough*).