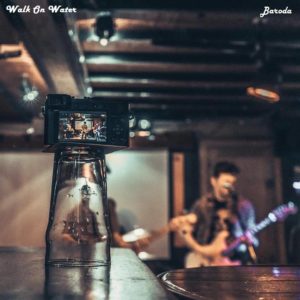 EP’s can come at you from different places. Maybe one gets slipped to you across a sodden bar table. Maybe you get sent one in the post. I became first aware of this particular tape by local four-piece Baroda on the sunny banks of the Danube River in Budapest. I struck up a conversation with two of the band’s members as we toasted our inadequate Irish pigments. I think The Kooks were sound checking in the background. All in a days work etc etc. Fate conspired to delay the release of the EP, but Frontman Neil Goss told me that while they had matured considerably, that the songs still represented something for the band, their beginning. So naturally, its where we should start.

The Belfast quartet claim to play “a mix of blues, indie and alternative rock.” Variety then, clearly, is something they pride themselves on. Rightly so. Their debut EP Walk On Water is a rare jack-of-all-trades debut release that sees its owners enhanced, rather than diminished, by the considerable load they incorporate into their sound. A wide variety of influences are present, but rather than drowning each other out they work in harmony. Look no further than the slow tempo, acoustic blues of One Kiss, or the speedy, psychedelic licks of No Sympathy or the rocking brit pop crescendo of Walk On Water. At a considerable length for a debut, the combination of distinct 90’s inspired melancholic melodies and modern twists sounds both fresh and tight.

Indie dipped riffs, dancey licks and a healthy dose of potential, Baroda have stumbled upon what could be a defining identity if they play their cards right. A promising, fulfilling debut endeavour.