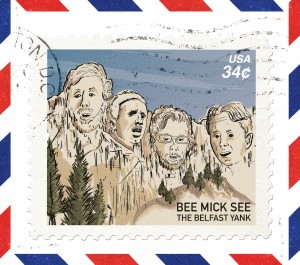 When you think of hip hop, you think of NYC, Compton and the Dirty South. Belfast isn’t somewhere that springs to mind and It doesn’t take Einstein to work out that rap isn’t a genre we’re really known for up north of the Emerald Isle. Acoustic folk artists and indie bands yes but MC’s spitting bars, not so much. There’s many a cynic out there that thinks it’s a genre we should leave alone and to those cynics I say, forget about the accent and give ‘The Belfast Yank’ a listen.

Brendan Seamus A.K.A Bee Mick See is hands down the best hip hop artist to rise up out of Northern Ireland. Okay so he wasn’t born here but after 10 years on Irish soil, he’s about as ‘Belfast’ as they come. From his wordplay to his flow, this debut LP is immersed in the culture we associate with our wee city. The Belfast Yank opens with ‘Belfast Slang’, a lesson in the local lingo that will win over even the most stubborn listeners. You might even start singing along! With lines like “A chav down here is known as a spide, a cute wee girl is known as a ride” how could it not? Catchy, quick witted intro to this 11 track debut.

Behind the punchy beats and quick-witted banter ‘The Belfast Yank’ is a surprisingly emotionally honest album. On ‘Awkward’ Bee Mick See gives us an insight into his troubles as a teenager, “A skinny wee lad who craved acceptance” It’s not like his usual tunes but in this case, change is most definitely good and with Kev Jones lending his vocals on the chorus, it’s one of the best on the album.

Seamus calls in American hip-hop artists MC Lars and Tribe One to accompany him on the ‘Stress’ a track that highlights the importance of putting down the smartphone and turning off Netflix. A lyrically honest account about the pressures of modern life.

On ‘Music’ Bee Mick See is back to what he does best, quick witted banter and excellent one liners all over a upbeat, uplifting backing track, “I’m about as cool as a boiling kettle”, “I can’t find God so albums are bibles” (what a lyric!) This one’s got a proper feel of The Streets about it, it’s nice, then comes the chorus, “If music had a hole I’d stick my wab in it” – only Bee Mick See eh?

Quarter finalist on The Voice Ireland and better known as Yellowbridge, Ciara Donnelly makes her first of two appearances on the album next on ‘Potential’. It’s a great track telling the tale of a tumultuous relationship, thumping percussion, evocative vocals from Ciara, a stand up performance from Seamus and a lot of brass (of the band kind) – top track.

“I listen to Bee Mick See more than I listen to my ma”, it’s ‘Alphabetic Blocks’. The trumpets and slow percussion of the previous track has been replaced with electronica (think final level Sonic). If The Belfast Yank has shown us anything, it’s that Bee Mick See is diverse and a bit of a tongue in cheek genius when it comes to wordplay “like Pete Townsend I do it for the kids, I get drunk on about 3 tins”. This one is immersed in Belfast culture, and even with lyrics like “my dick has an awful smell / my dick never does that well” Seamus has a charm about him that will leave you smiling and singing along by the end of it.

‘Fear Is a Gift’ is filled with double entrendres and tongue in cheek lyrics Bee Mick See is known for. It doesn’t quite pack the same punch as other tracks on the album, it’s a decent listen with a feel of Macklemore about it.

On ‘Love’ Ciara Donnelly is back to accompany Bee Mick See as the two battle it out, telling the story of a crushing breakup between two lovers in a love/hate relationship. Seamus’ thick vocals against Ciara’s soulful tone make this one a pleasant listen and it’s clear to see why it was chosen to be a single.

Another catchy tune comes with ‘We Took a Dive’, a track in which Bee Mick See gives us the low down on his story. It’s got a Fresh Prince feel to it, except instead of his auntie and uncle’s in Bel Air Seamus was put on one way long haul flight from Portland, Oregon to Belfast. Paul Denver lends vocals to this praiseworthy chorus and despite the downbeat lyrics, ‘We Took a Dive’ is a pretty upbeat track that I have no doubt you’ll be singing along to – one to watch out for live.

On penultimate track ‘Death’ featuring Canadian rapper Eternia and Belfast’s own, ‘Most Handsome Man in Rap’ Roysta, Bee Mick See touches on darker topics once more, this time regret. Dirty Roy provides us with what he claims to be his final bars as ‘The King of Belfast’ as he bows out of the rap game in his gruff tone that at a first listen may leave you confused. You wouldn’t think Roysta over a lively upbeat backing track would work but it does. ‘Death’ is a definite grower that becomes more appreciated with each listen.

MC Lars is back to wrap up the album on final track ‘Natural Scents’ a track summing up everything that’s wrong with popular culture in 4 minutes, from our obsessions with reality TV and beauty to our blasé attitude towards global warming. It might be hidden behind fun lyrics and quick wit but look beneath the surface and ‘Natural Scents’ has a brilliant message. Lad culture take note – “BO spray won’t get you girls, Clearasil cream won’t get you girls / Confidence gets you girls! Persistence gets you girls / That fake tan sitting on your shelf, teaches you to be ashamed of yourself”.

‘The Belfast Yank’ sums what Bee Mick See is all about impeccably. From start to finish we see his tongue in cheek attitude, brilliant wordplay, great flow, self-confidence and charm shine through  – An overall solid release that will impress both fans and new listeners alike.

Show Your Support For Culture NI