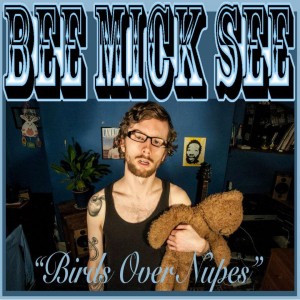 Now there aren’t many rappers in Belfast and there certainly aren’t many who can do it well so if you haven’t heard of BeeMickSee where on this good earth have you been?  We’re a bit late to the party with this review as the EP was released back in January but better late than never. Throughout the EP we get a sneak peak into his personal life as he talks about ladies, being unlucky in the love department and real life situations told through cleverly inventive lyrics tied in with good old Belfast banter.

First track ‘Hey Girl’ tells the funny story as to just how nervous BeeMickSee gets when talking to girls, using cheesy chat up lines it’s worlds apart from other rap songs and it’s refreshing to hear the lyric “will you be my honey? I’d pick you any day over money” instead of being all about the bitches and dollar. ‘Favourite Girl’ It seems Brendy’s luck may have changed, has he found his ideal woman? The chorus will stick in your head from the very first listen and just goes to show our Brendy is a big softie at heart. ‘Single’ an insight into how shit it actually is being single but all dressed up with witty references to Belfast, bet you’ve never told anyone you’re “Single like a 30p feg” nope didn’t think so, tell me that’s not genius.

‘I’m Weak’ a song infused with dub and dirty electro beats with a heavy guitar riff thrown into the mix while Bee tells us all about his allergies, it’s a lot different from the other songs on the EP but one could imagine a few people busting that Mylie Cyrus twerking move to this one at gigs.

Every great rapper has a skit on their album, and Bee Mick See is no different. A scenario is created where a vulgar chav approaches a rather snobby clued in lady before “The gash merchant” BeeMickSee’s gig. The Le coq Sportif wearing tramp gets a rather detailed telling off from the snobby girl defending BeeMickSee and his definitely this seasons Ralph Lauren jumpers; very funny indeed. The last track on the EP is by far the best, ‘Who Likes Laughing’ and if you’re mood isn’t lifted after the catchy Ska inspired chorus and possibly the best lyrics ever written “I’m gonna live my life like a spide at a rave” sung by Paul Denver then it’s fair to say you’re not human.

You could easily mistake Bee Mick See for someone who is taking the piss if you’ve only heard one or two songs but this EP proves Brendan is extremely talented and knows his craft exceptionally well and that shows in the live shows too.