Big Guns – Down But Not Out 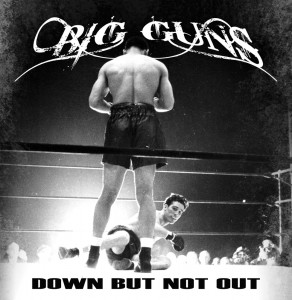 The Classic rock scene in Northern Ireland is in astonishingly good shape right now, with the likes of Screaming Eagles, Trucker Diablo, Baleful Creed et al wowing audiences both at home and further afield. To this list another name must be added: Enniskillen’s Big Guns. Rising like a phoenix from the flames of rock band Twister in January 2012, the Guns have worked tirelessly on both their live shows and original material. This hard work has been revealed on their debut album ‘Down But Not out’, released on November 29th this year.

The album opens with some ‘classic rock with a capital C’ in the shape of ‘Song For a Friend’. From the first notes the AC/DC influence is immediately apparent, as the song is bursting with meaty riffs and powerful yet simple drumming. The heartfelt lyrics tell the tale of a much loved friend who has passed; it is a compelling first track indeed.
From there, the album runs the standard gamut of classic rock themes, from sex (the innuendo-laden ‘Kiss and Tell’), drugs (party anthem ‘Red Eyed and Rolling’) and rock n roll (the catchy as hell ‘The Devil’s Highway’, all squealing guitars and beefy drumbeats).

All fairly predictable fare for a rock band, right? However, there are also a handful of songs that prove that the band are capable of much more. The ‘Bark at the Moon’-esque ‘Fall From Grace’ is a deeply personal break-up song. Singer Kieran ‘Twerp’ McArdle’s vocals simply drip with emotion, and the lyrics are very close to the bone – sometimes almost uncomfortably so (“you broke our little boy’s heart”). Similarly, ‘Remember Me’ tells the story of a long-absent parent with bitterness, venom and hurt, while its Southern groove gives the song the most modern flavour on the album.

There are also a few curve balls in the shape of track two, ‘Always and Forever’ and track seven, a cover of ‘Rockin in the Free World’. The former is an instrumental number – a rather bold move on such a short album, but with its mournful, bluesy vibe and ‘Metallica ballad’ sound they just about pull it off. The latter is also a brave move – a new band taking on the legendary Neil Young?! – but McArdle’s gruffer, throatier vocals and some pretty sweet guitar solos adds add enough of their own spin to this classic that again, they succeed in pulling it off.

In fact, this is a rather audacious album altogether. Yes, it’s classic rock (done fantastically well, it has to be said). But the band have included enough surprises and original ideas that they’ve avoided the trap of simply rehashing those tired old rock clichés and instead have created an album that’s innovative and captivating. So that’s another addition to our local classic rock posse then!