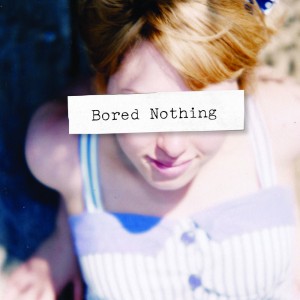 Bored Nothing is the DIY project of 22 year old Australian Fergus Miller. He plays everything on the album, recorded at home on a four-track, producing the album as well. Miller’s 2012 included music released through Bandcamp, CD-Rs and cassettes before the release of the self-titled Bored Nothing.

The album screams, or rather more gently asserts itself as a product of 90s indie and more obviously slacker rock. This music takes its roots in the likes of Pavement and Dinosaur Jr., lo-fi indie music – aspects of 90s alternative, grunge and lo-fi revelling in laziness and the slacker lifestyle.

So here we have a collection of 14 songs making up Bored Nothing’s debut album. The album is well summed up in its first track, Shit of Brains. A lo-fi, guitar based song with nice enough guitar parts moving it along. Indeed the opening lyrics set the tone very well – “What’s wrong with sleep, compared to weed it’s cheap”. The rest of the album follows similar lines, Miller’s discontented lyrics drifting over lo-fi rock songs.

There are some nice moments on the album; Miller’s voice has hints of Elliott Smith and indeed the acoustic track Get Out of Here is the closest Miller comes to sounding like the 90s cult indie singer-songwriter. There’s even hints of surf rock which makes its way into some of the guitar lines such as I Wish You Were Dead. Some of the tracks have a genuinely pleasing flow to them, bringing with them instant familiarity. One of these tracks is Snacks which doesn’t sound particularly different from the rest but has a nice hook to it. Originality is certainly not Miller’s goal here and while familiarity can be a strength much of the album sounds much too familiar.

Get Out of Here highlights another flaw in the album which goes hand in hand with the familiarity aspect – it’s a few tracks too long. Get Out of Here is indeed perfectly placed, coming in at the halfway point but the rest of the tracks are very similar to each other. The lo-fi recording means the guitar tones all sound similar, excluding some grating distorted parts while the drums and bass rarely stand out.

If you like your music home-made in a very laid-back or even stoned mindset you’ll probably enjoy this. For everyone else it’ll mostly drift by minus the odd pleasure.