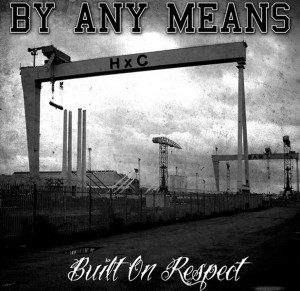 Belfast’s finest By Any Means are back with the follow up to their first EP with this, a full length studio album entitled Built on Respect. Judging from the band’s last set of songs, listeners of this new album can immediately expect an album full of low sounding guitars, fast drums, throaty screams and heavy bass lines to pound on the ears almost threateningly.

It doesn’t disappoint, either. Initial thoughts – Built on Respect really throws a listener in at the deep end, with low chuggy guitars dripping with distortion, showing a listener exactly what to expect from the rest of the album. It also seems that the band are film fanatics, too, judging from the inclusion of a speech from Agent Smith from The Matrix right at the beginning of the album, and the inclusion of a song called ‘Mercury Rising’. Musically, though, it primarily sounds like it’s designed to be a complete hardcore onslaught on the eardrums.

It’s good, too. There’s some excellent guitar work, with some of the fastest picking possible, especially on the intro to title track ‘Built on Respect’. The drums are also consistently very speedy, but don’t compromise on the hallmarks of the genre and add in plenty of double kicked bass drum work to keep the traditional metal fans happy. ‘City of the Dead’ is also a complete triumph, and is one of the songs on this album that feels like it’s really well thought out and really well put together, with a clearly defined structure and all the parts in the right place.

Lyrically, the album could use some work. They just aren’t thoughtful enough, and feel like they’ve been added on top of the music purely because ‘it’s the done thing’ when it comes to making music. Songs usually have lyrics over the top, and By Any Means seem to have taken themes that bog-standard metal bands use in their songs, and plastered them all over the music. It does ruin it slightly; a bit more effort on the vocal front (when it comes to theme, not style) and By Any Means would be superstars.

At the end of it all, Built on Respect is an exceptional album, let down by some vocal work that could use a little more effort when it comes to actual lyrics – they’re slightly clichéd. Musically, the album is completely sound and excellently written, not to mention well mixed and effortless to listen to. Now they need to keep going, and return with an even bigger set of songs, and they’ll be gracing metal charts everywhere very soon.