Cedric Has A Name – What We Want 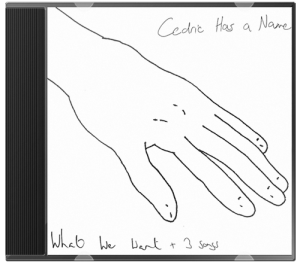 Cedric Has A Name, is a project that I previously knew very little about. So, if like me this is an introduction as well as a review, let us take a look at the background of this project.

Cedric Has A Name is the alter-ego of Dungannon born, Belfast Based Singer/Songwriter Chris Steenson. Created in the early months on 2008 Cedric Has A Name released ‘What We Want + 3 Songs’ in June 2011. At first I find the melancholy indie sounds of ‘Barfly’ and ‘Get Too Close’ to be very endearing, softly spoken and uneasily quiet. A Likeness to Pedro The Lion, Bright Eyes and Elliot Smith can easily be made. But listening to tracks such as ‘Let’s go out now’ I find myself wondering if there is more to this release than I originally picked up on.

Originally I would have placed this release in the ‘Listen to while either crying, waking up or if it is too rainy outside to leave bed’ pile but on further listen it is apparent that there is a gin soaked nervous hope romanticising the songs. Though the lyrics do not jump out and pluck heart strings like many within the genre have perfected, beautiful guitar work and the occasional harmonica ensure that any listener feel every melody. The title track ‘What We Want’ is the stand out track. The dark nature of the lyrics over the optimistic guitar line contrast very well and we are left at the end of the EP feeling like we want more. Unlike many releases I have heard from many Irish singer/songwriters, I cannot feel as if while listening to ‘ What We Want + 3 songs’ that we have taken a journey and come out the otherside.

Cedric Has A Name, have released what is a perfect stepping stone for the next release. At first listen the release seems drawn out and at times too simple but it is a grower. On second listen, third and forth lisen it became apparent what Cedric Has A Name is all about. It is definitely one to check out, best served on a rainy day.

Ruairi and the Owls – Rip Through Her Sky