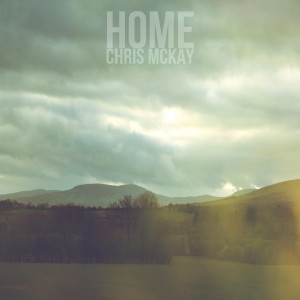 “This morning I wrote you a letter, I didn’t know what else to do, I put down everything that I was feeling, that I just couldn’t say to you” These are the opening lines to ‘For You’, a song from Chris McKay’s debut EP “Home”. These very heartfelt lyrics flow throughout the EP showing the emotion that Chris must be feeling towards his recently deceased brother.

Chris McKay started out playing guitar with Glasgow rockers Sing-Kill-Worth. When his brother passed away suddenly last September, he found that the best thing to do with his time was to record songs which eventually lead to the recording of ‘Home’. Chris started writing songs after finding that he had a lot of free time after he had to defer college for a year. He found that writing songs was his way of paying tribute to his brother and that this also helped him with the grieving process. Every instrument heard on the EP has been played by Chris himself. The depth and emotion put into the songs is just overwhelming. He doesn’t hold back with the lyrics, very clear and precise throughout.

The EP kicks off with ‘No Longer There’, a slow building song with plenty of calm humming that eventually builds to a heavier guitar sound similar in ways to Snow Patrol and Kings of Leon. The title track is similar to this, again featuring some very honest lyrics about time spent with his brother – “every second, every hour, every day, I’d wish you’d come back home”.

This is a very heartfelt and emotional collection of songs that Chris McKay just had to get off his chest. He plays a blinder throughout, every note and beat is perfect. All the best to the future and that Chris continues writing and playing such honest and profound tunes.

I Used To Be A Sparrow – You Are An Empty Artist

New RunawayGo Single – “This Is Real”

Stream: Arborist – I Heard Him Leaving