Ciaran Lavery – Other People Wrote These 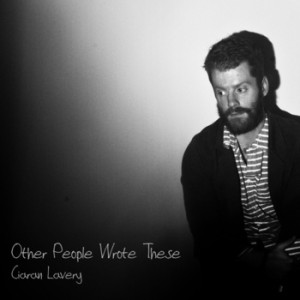 Ciaran Lavery seems to be getting all around the place at the moment. Bursting onto the Northern Irish music scene with debut solo album Not Nearly Dark, he captured people’s attention with his Damien Rice like husky tone and his song writing ability. Following the success of this debut album, Ciaran has released a  4 song ep “Other People Wrote These” which as the title suggests contains cover version of songs from the 70’s & 80’s and reinvents them in Ciaran’s troubadour style. I unfortunately was not around in the 70’s or 80’s and was unfamiliar with all but one of the songs.

First track ‘I Drove All Night’ (Cyndi Lauper) begins with a picked banjo with guitar and drums providing a slightly eerie background into which Lavery’s vocals enter. The song builds to a climax as Ciaran sings “I drove all night” but falls away introducing dissonant violins into the mix. This pattern continues for the song’s 6 minute duration, keeping the listener enthralled with its dynamic change ups. 2nd Track ‘Psycho Killer’ (Talking Heads) is probably my least favourite track off the Ep. Probably because on listening I didn’t really like the original. However like the previous track Lavery is able to grab the listener’s attention as his raspy vocal gives the song a new edge.

Pat Benatar’s  ‘All Fired Up’ for me has to be my favourite track from the Ep. Taking a slower tempo and stripping back on the accompaniment allows the listener to focus on Ciaran’s voice. This song is tainted with a melancholy and sadness. This is a refreshing change compared to the rock anthem like original, showing off the brilliance of Lavery’s imagination to reinvent. Final Song, Lionel Ritchie’s ‘All Night Long’ is probably the most known song on this Ep. A more subdued tempo is presented giving the listener once again, a totally new idea of the song. Electric guitar swells in the chorus’ change things up from the relatively straight verses.

Ultimately you need to look at Ciaran Lavery’s “Other People Wrote These” as a covers project. It shows off Ciaran’s incredible skill in arranging these songs into a folk genre, encouraging the listener to hear them in a new light. Sonically this Ep sounds fuller than Ciaran’s previous work thanks to the help of Michael Mormecha. That being said if I compare this Ep to “Not Nearly Dark” I feel that it falls slightly short in terms of lyrical song writing (Something that Ciaran cannot help) in comparison to the original songs of his album which in my opinion are superior to that of these covers. Songs like “Little More Time” and “Shame” have the ability to connect with people even on the most basic level.  I did enjoy “Other People Wrote These” especially from a musical point of view and would not hesitate listen to it again but I feel that Ciaran has enough talent that he does not need to play  songs that Other People Wrote even if they his covers are generally better than the originals!