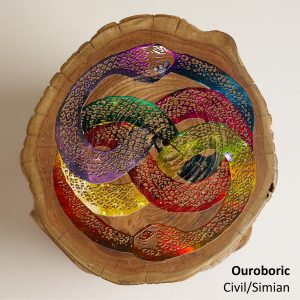 Our Wee Country is full of talented individuals and good bands. We know this and we all have our favourites for whatever reason. But whether we admit it or not, we know that a lot of local bands are heavily influenced by one band or another . In other words, ‘our wee version of…’. This doesn’t mean we can’t like them. It doesn’t mean they aren’t good bands – heck, some of them are releasing better material than the bands who influenced them currently are. But we have to concede that they have this unofficial label and it can be a barrier to them being taken really seriously on the mainland. However, we also have bands who don’t fall into the ‘our wee version of’ bracket. R51 are definitely one and I have been a champion of them for several years. I have high hopes for them and now, having been feasting on Civil Simian‘s “Ouroboric” for a few weeks, I have to add their name to the list of local bands who are truly original.

I have known about them for some time, I shared a stage with them (back when they were Urban Scarecrow) in a previous life, and have reviewed a couple of their singles in my Singles Club column. I have always thought they were a band with terrific potential. They are not a band without influences, such a beast does not exist, but the influences are so disparate and they provide the spice for the dish rather than being the main ingredient. There is a touch of The Doors, Nick Cave, Red Hot Chili Peppers,  Arcade Fire, Radiohead and Jeff Buckley in that melting pot, to name but a few. For me, the questions they had to answer were, “could they put together a collection of songs that wasn’t a hotch potch?” “Could they find a common sound/feel/style to link it all together into something that was Civil Simian and not, 1 song like so and so, 1 song like so and so etc?”

The answer is a resounding ‘yes’. “Ouroboric” is a triumph of musical maturity and the fusion of a myriad of influences into a cogent (if slightly eclectic) whole. This is the work of a band of proper musicians who use multiple instruments to create a sonic tapestry. Many bands with this much musical capability would perhaps try to do too much in each song, creating a mess. Not so with Civil Simian. By the end of the album, you know how talented they are, because you have heard all that they can do across the album. But they don’t throw the kitchen sink into each song – thankfully.

In fact, ‘Ouroboric’ starts off with two of the band’s more straightforward songs in the short and sweet ‘Brittle’ and the soulful ‘Believe’ and the unaware may have pegged them as an off-beat but fairly routine indie pop band. Such illusions are shattered by the time ‘What’s Up’ has worked its funky modern-times Doors magic (with a bit of RHCP rapping). And this is the thing, there are bands out there who do songs like ‘What’s Up’ – it’s not that Civil Simian are reinventing the wheel.  But those bands would do 10 ‘What’s Up’s to make their album. But not with Civil Simian. When ‘What’s Up’ is done, ‘Equual’ comes slithering in with its cynical lounge lizard tongue flicking out. Again, there are echos of ‘Soft Parade’ Doors and Ruari McCloskey’s normally high pitched vocal drops to a Jim Morrison/Nick Cave baritone.

In its wake comes the beast that is ‘What is This?’ – all distorted bass line, Zeppelin-like riff, and with Ruari’s vocals back to their most strident. For me, this song encapsulates everything that is so good about this band and this album. It’s clever without trying to be too clever, it’s heavy without being loud, it’s experimental without being un-listenable. ‘What is This?’ – effing awesome, that’s what it is. ‘Whylesong’ is like a mantra or sacred chant – which is why it reminds me of Jeff Buckley – the pitch and cadence of the voice and that feeling of a song written in a stream of (altered) consciousness.

A horn section blares the intro to ‘Y Dn’t I No’ before it gives way to an ethereal instrumental feast as the band runs through the full gamut of its talents; always with a respectful nod to the past but also a very modern feel. Again, this is such a clever achievement. The modern feel continues as ‘Head on Fire’s lush synths take over. This is not an album you will get bored of. Ruari’s vocals hit the stratosphere one moment then crawl along the ground the next – reminding me of The Cult’s Ian Astbury. What a range the lad has and how well he knows how to use it! ‘Illumination’ maintains the standard.

The album closes, a little bit self-indulgently (but if you’ve got it, flaunt it), with 2 songs with running times of over 9 minutes each, which could perhaps earn Civil Simian the label ‘Prog Pop’. But, ‘Watershed’ is a triumph whatever name we give to its style and is in effect the true album closer as ‘(Tits on TV)’ is a Jazz/Folk instrumental that doesn’t even start to half way through its running time. Fitting really.

So, suffice to say I love ‘Ouroboric’ and it is a thrill to have yet another really mature, intelligent band in our midst. I realise not everyone will ‘get’ them, much in the same ways as not everyone ‘gets’ the bands who have influenced Civil Simian. That, I am afraid, is their loss. Civil Simian and bands like them are, I sincerely hope, the future for music made by bands. Seek out this band. They should be the name on everyone’s lips over the next few months. They should be up for local awards, had I any influence in the matter. But I will champion this band at every opportunity.

‘Ouroboric’ is available from a choice of sources at http://hyperurl.co/ouroboric. You know what to do.

Our Back Yard Returns For 2017