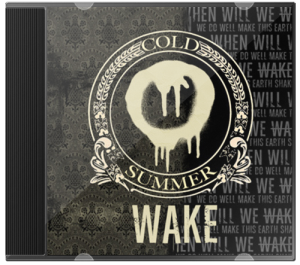 Cold Summer’s EP, “Wake” is the newest release from the West Yorkshire based four piece. It’s been early days so far for the quartet, but having undergone a line up change midway through the band’s series of support slots before welcoming on board vocalist Dan Feast, they have received much positive feedback and a brush with mainstream exposure. So does their new EP live up to expectations?

“Waiting” opens the EP tentatively, with brooding bass and sonic build up before growing into consistent waves of classic post hardcore style guitar. It then veers into alternating between a surprisingly steady blend of melodies in the verses and bursting into reasonably full on, yet somehow calculated grind of distortion in both the breakdown and choruses. Although heavily reminiscent of Thursday throughout, it succeeds in showcasing the band’s already finely tuned sense of dynamics.

The interlude, if you will, that is “Wake” begins with chiming guitar arpeggios only to be over ridden by Feast’s screamed lyrics in reference to the title. Yes, it is effective in terms of building anticipation, if more than a little underwhelming.

“A Is for Arson” however, is a pleasantly promising track. It’s driving melodic punk riffs, consistent bass and thrash style drumming is completed by the urgent vocal delivery present within the verse, only to crash headfirst into the resounding triumph that is the chorus. The decidedly determined lyrics work well with the punchy tone of the guitars, creating a catchy, Rise Against style melody in places. The gang vocals of the outro are a bit of a let down when held up in comparison, although to their credit they only serve to build on the previous track, “Wake”.

“Car Crash (In Progress)” is slightly more unpredictable than it’s predecessors. Opening with a guitar riff that could easily be mistaken for a Rage Against The Machine song, it is then layered with cautious screamo vocals. It then edges into a Serj Tankian style rock ballad of a chorus before shifting back to the Rage Against The Machine a-like sound and repeating as appropriate. None of this would be so bad if the band actually attempted to inject some enthusiasm into it, which they do have a go at by placing a rare guitar solo into the outro, but it just tries so hard throughout to be someone else’s song, it strips itself almost completely of the promise shown previously on the other tracks.

Gently closing the EP, we have the intentionally stripped back, almost acoustic “Mistakes”. It is brilliantly refreshing, especially from a band that is clearly very rooted in their genre and its trademarks; this is a risk I’m sure they did not take lightly. Thankfully, it pays off, the pared down sound serving to show off Feast’s vocal range and the band’s technical ability as musicians to an even greater degree. A satisfactory closing track to an overall thoroughly enjoyable EP, it only hints further at their promise yet to be fulfilled.

All things taken into account, this is a punchy, driven twist on classic post-hardcore and definitely worth a listen for anyone who would consider themselves a fan of the genre. The fact that Cold Summer are also such a relatively new band only proves further that they are without a doubt, ones to watch and should be extremely proud of having released an EP of such quality, especially at such an early stage. I’m sure that they will only continue to grow as musicians and that they will go on to widespread acclaim.

◀ STANDOUT ⁞ A is for Arson ▶
◀ SOUNDS LIKE ⁞ Foo Fighters | Thursday ▶