Comply Or Die – Comply or Die

by Christopher Owens
in Album of the Week, Blogs, Music Reviews 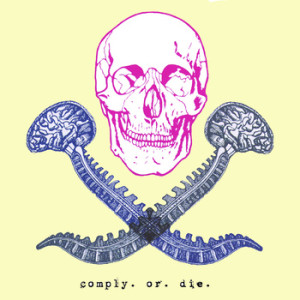 With the news that Belfast punk/metal stalwarts Comply or Die are issuing their first demo for public consumption, it’s an apt moment to revisit their debut LP. Released in 2009, it has been somewhat overshadowed by their subsequent releases and the absence of any of the songs from set lists (although ‘Unit’ has appeared sporadically) hint at dissatisfaction on the band’s part. If this is true, then it’s a shame, as this is an album that still holds up.

The hardcore stomp of ‘Red Fever’ begins with a layer of feedback, sirens and a door slamming. This works as an indication to the listener that all hell is going to break loose but also enriches the aura around the lyrical topics: terrorist paranoia and the threat of chemical war. Riff wise, it’s roots are in hardcore but also has similarities with the more arty end of hardcore (Naked Raygun). So while the song ATTACKS, it’s not as full on as, say, Doom. Which gives it more of a unique feel, and makes you notice the atmosphere behind the song.

Lyrically and vocally, the approach is short bursts of vocals/information screamed by bassist Ian Pearce to the listener. It’s an approach that Discharge used to perfection, but while they were using it to convey their message succinctly, Comply or Die’s approach is to depict the heavy air of the lyrics. By having small, concise blasts they successfully depict a narrator on the brink of collapse due to all that they perceive to be around them.

Another example of this approach is ‘Negative Two.’ This time, it’s the turn of guitarist Michael Smyth, as he sings “Hey! You! Spending too much time alone” four times. Here, the vocals act as a form of conscience, poking away at the listener who maybe just wants to headbang. Interestingly, Smyth describes the song as being “about spending a lot of time alone getting drunk and going stir crazy as a result.” Musically, this track is another example of the band’s differing approach to hardcore. Frantic riffage designed to encapsulate a life going out of control gives way to staccato chords (with “nothing” chanted four times as well) and then a beautiful, clean guitar line signifies the “moment of clarity.”

Post punk is a term abused and overused nowadays by indie bands who think playing “angular” chords and having a heavy bassline is enough, ignoring the crucial three: atmosphere, intentions and sounds. All three are present on ‘Negative Two’, so Comply or Die can legitimately claim to have elements of post punk in their sound. ‘Unit’ serves as the most traditional hardcore song on this LP, which is not a criticism. By doing this, it simply highlights the differing influences within the band (hardcore, metal, post punk) and it’s utterly thrilling to hear all three members pull these different strands together to come up with such a brilliant song.

Closer ‘Silence As The Enemy’ is a summary of all the musical and lyrical themes on display throughout this album: the clean guitar lines to indicate clarity, almost staccato like vocals and layers of riffs/noise to excite and disorientate. The middle section is stunning. With drummer Matt Crothers holding the whole thing together, it goes off into Skullflower territory, where the frequency of the layered noises are used as a Rorschach test for the listener. And, it matches the predictions made by the opening sounds on ‘Red Fever’: we warned you that this would be hell, now we’re going to punish you.

It’s not a perfect album: some of the vocals are a little too atypical (this writer still cringes when Smyth sings “Hold on tight” in a manner akin to a kids TV presenter on ‘Stop When the Blood Starts’), the drum sound isn’t as crushing as it should (often, it sounds like Crothers has coated his drums with cardboard) and the bass could be more prominent in the mix. However, four years on, this s/t LP still stands out as a confident and assured debut from a band determined to throw as many curveballs to the listener as possible. Their recent metamorphosis into a stoner/crossover act a la High on Fire shows that we must always expect the unexpected with Comply or Die and that a new album can’t come soon enough. But their first effort deserves to be considered when discussing the evolution of Irish punk/hardcore: The Outcasts, The Defects, Toxic Waste, F.U.A.L, Circle Again, The Dagda and Comply or Die.

Turn it up loud and feel the power.