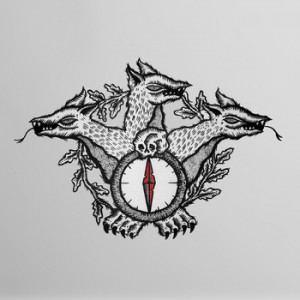 Belfast noise rock troupe Comply Or Die have hailed third album ‘Northless’ as their last, and have therefore ensured that their story ends not with a whimper, but with a bang, crash and numerous other noises. Over the course of 8 songs, the band prove hard to categorise, with nods to space-rock, punk, hardcore and out-and-out metal mixed in with sparse dynamic shifts; the only prerequisite seeming to be that any category chosen is one seething with tension and aggression.

Opener ‘Meridian’ finds the band briefly creating space through a phased melody reminiscent of Kyuss, and then proceeding to fill this space with Melvins-esque sludge powered by thudding percussion – metallic, but having much more in common with left-of-centre acts such as High On Fire, Neurosis or the aforementioned Melvins than anything more riff-centric – and topped off with vocals that can’t help but bring Fugazi to mind. It’s a compelling concoction that sets the tone for the dirty punk thrust of ‘Argonaut’, which barely lets up until an expansive bass-breakdown, only to come back twice as hard. ‘Cultus’ follows similar suit, seeing the intensity hit its highest point as it thrashes along at a pace that raises concerns that the band could sustain it for an album’s length. Wisely, ‘Iron Mountain’ draws doom influences to provide a respite of sorts – whilst it can hardly be viewed as a breather, the slower tempo varies the tone from breakneck to lurching, winding down into a simple monolith of a riff.

The dissonant intro of ‘Architecture Of War’ sees Comply Or Die rise from the sludge of its predecessor and break into a sprint again, with some nerve-shredding vocals that again leave the listener wondering if the pace can be sustained, before breaking down into a spiralling riff in which oddly-percussive guitar tones highlight the fact that whilst the warts-and-all production values might not suit every band, it fits Comply Or Die perfectly.

Whilst the raw production works in the band’s favour, it’s a double-edged sword: albums that burn on intensity can burn out prematurely, and whilst this isn’t entirely the case on ‘Northless’, there is a certain amount of adrenal fatigue that accompanies the commotion. ‘Agon’ is a ferocious assault, but it’s arguable that the impact is lost in the morass. In fact, it’s even more noticeable when the song switches pace mid-way into a gripping Sabbath style swamp boogie: it proves to be one of the more memorable parts of the album – especially when the band kick in to a particularly high gear after it – but also begs the question if more use could be made of dynamics in the preceding tracks. The band have a good grasp of spacing in their repertoire – ‘Bishop’ sees them mine a number of interesting drone-influenced seams over the course of five minutes – but some tastes might prefer them to implement this more often. Closing with the characteristically noisy ‘Dagon’ is atypical – clocking in at less than two minutes, it may well have been a better fit earlier on the album – though it leaves the thought that Comply Or Die certainly go out swinging. Either way, ‘Northless’ is an accomplished slice of aggression that will no doubt appease those looking for something chaotic, as well as those who are looking to find some order in that chaos.