More Than Conquerors – Everything I’ve Learnt

by Anna Cafolla
in Music Reviews 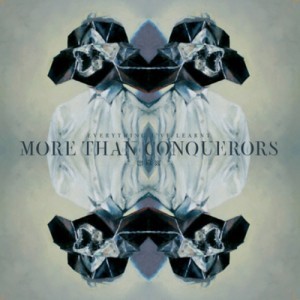 Forming in 2009, More Than Conquerors have certainly held us with anticipation for their recently released debut album, ‘Everything I’ve Learnt’. The Belfast alternative four-piece are the veterans of dark, sweaty, cider-sticky floored band nights. Given that, years of gigging locally has led to European tours, two successful EPs and local and national radio airplay. They had an explosive album launch in the Limelight, as well as a successful appearance at Cut the Transmission in Derry alongside Smalltown America label mates LaFaro and And So I Watch You From Afar. The humble work ethic of the quartet is clear, and my expectations for ‘Everything I’ve Learnt’ were high that this would be reflected.

The album opens with ‘All That We Can’ – a track that wouldn’t be out of place on an older Brand New tracklist, such as their ‘Your Favourite Weapon’ album, or the opening of a Biffy Clyro set. It has the potential to create a big arena atmosphere with crashing percussion and heavy, dark guitar riffs, while the juxtaposition of lead vocalist Platt’s reedy, pitch-perfect voice is a welcome, more intimate surprise for first time listeners of the band. The vocals are reminiscent of early Weezer, while his local accent is wonderful and genuine. The next track ‘Pits of Old’ is complimentary and fluid, with a pace that makes it really excitable. As the first single off the album, it’s definitely done its job and will no doubt be a crowd pleaser with sing-back sections and a foot stamping beat.

The lyrical intricacy is what makes ‘Everything I’ve Learnt’ special. The band’s name is taken from a biblical reference, a running theme in their lyrics. ‘Smoke, Tree, Lungs, Knees’ depicts this through Old Testament imagery; ‘You found my love in the stream’ and ‘You can’t control the sea’. Despite this seemingly outward message the lyrics are by no means superficial. A sense of universality is apparent: ‘When the Well Runs Dry’ depicts an inner trouble- ‘ I only talk to God when there’s something I need’ and ‘Amounts to Nothing’ asks us ‘Where’s the hand that helps me rise and walk?…How could I forget about something so small?’ ‘Jaw’ is a troublesome track with lyrics that haunt and torment, intertwined with a dark underlying bass and layered guitar riffs. The tracks meanings are truly open to interpretation while remaining an obviously personal and evocative piece.

Platt’s vocals are a real asset successfully evoked throughout ‘Everything I’ve Learnt’ and complimented by well thought out harmonies and clever anthemic backup vocals warranting particular commendation on ‘Smoke, Tree, Lungs, Knees’- a flurry of edgy, splitting Pixies basslines and rolling drums where drummer Neish experiments with well-executed pace. The soaring harmonies combined with evocative lyrics add to the album’s richness in entirety. ‘Bring Me to the Bloodbank’ is a rare, stripped back piece that incorporates an ethereal, hushed tone without breaking the fluidity of the otherwise heavy, instrument laden album. ‘When The Well Runs Dry’ guarantees catchy riffs and an intelligent circularity to the track with runaway bass and pure vocal strength. This song in itself encompasses the entire tone; one of dark and torturous self exploration.

With tracks on the album as explosive as this, of course some are going to become fillers. ‘Temper’ is still a commendable song with its texture and hard hitting percussion, but it becomes lost among the flurry and seems to run away without leaving a footprint on the memory. Hearth & Home was a truthfully wavering end to the album, and arguably More Than Conquerors could have went out with a bang on ‘Six Weeks’, that hits you right in the chest with layer after layer of hard-hitting rock, or with the teasing tempo of ‘Try-Antlers’, a grungy Brit-rock track.

The years have been good to the guys, which have certainly contributed to their tight, rich sound. You feel the flecks of sweat hit you (in the nicest way possible) with each opening. ‘Everything I’ve Learnt’ is an album of self expression and journey in the face of adversity. It’s the bands own bildungsroman, and as a debut album shows an enormous amount of potential and development that can only be expected from them.