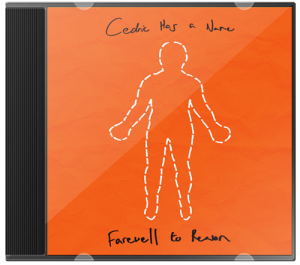 On first listen, you’d be forgiven for thinking that Cedric Has A Name is the alter ego of a hardened whiskey drinker verging on middle age. But you’d be wrong. Belfast based singer/songwriter Chris Steenson is the brains behind the act, with a head much older than his 20 years upon his shoulders. His latest EP, Farewell to Reason, is a follow up from 2011’s previous release, What We Want + 3 Songs.

‘Empty Avenue’ opens up the EP with a charmingly upbeat and ever-so-slightly out of tune riff on electric guitar. The verse reveals a rather untroubled singer, so laid back he could almost be horizontal. In fact, it wouldn’t be surprising if he recorded this lying down. It works though. The track is largely helped along by a reverb heavy production which adds a grunginess sure to prevent any sort of tedium from grabbing the listener.

Next up, ‘Last Line’, further showcases Cedric as a nonplussed singer. The clarity of the lyrics suffers somewhat as a result of the finish on the track, but the trademark despondent mood still comes across. The focus here is very much on melody, with a standard rock line-up weaving accompaniment around and through it. The track is brought to a close by a “choir” taking up the hummed melody that has featured so far, and serves as a pleasant contrast to the heavy backing.

‘After Image’ leads on with a noticeably cleaner and sparser sound. There’s a definite tinge of Bright Eyes stripped bare here. Even The Smiths can be heard in its plaintive introduction. It’s not quite a ballad, yet it has the romantic remorse of a love song; “Maybe if I could drink for a bit/Maybe I could blur you out of this”. Violin accompanies the chorus, further cementing the image of the forlorn, lonely bar fly depicted in the lyrics.

There’s no hurry to get through the EP as we come to closing track ‘Wish You Well’. Piano and strings combine to make this song the highlight of the collection. Its unfussy melody, with the addition of a striking violin arrangement, resembles a traditional air at first. But don’t be deceived: before we reach the end it descends into a cacophony of sound, with the trumpet as chief culprit. This reveals the true sentiment of the song, as unveiled in the last line “I hope I’ve seen the end of you”.

Whilst he hasn’t abandoned his lo-fi sound, the new EP is a step up from the stripped down acoustic guitar and vocals prevalent in the first. The addition of drums, bass, strings, piano – even trumpet – support a noticeably more mature writing style. There’s a lot to be said for this low key approach to song writing, but at times it feels like the songs would benefit from a cleaner production. Cedric Has A Name is known for a “melancholia” akin to Elliott Smith and Sean Lennon, and it’s not without reason. Their influence has obviously left its mark upon his writing, and never has it been more obvious than in Farewell To Reason.