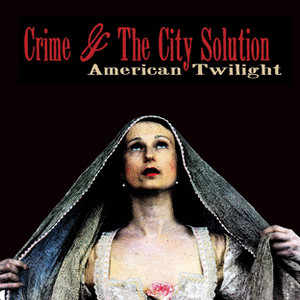 Comparisons can be lazy, often inaccurate but with a hint of the truth in there.

Taking a path similar to Nick Cave (Australian moves to London and then Berlin, signs to Mute, takes member of Einsturzende Neubauten as guitarist, has Mick Harvey in band) has led to Crime & The City Solution often being overlooked in favour of the Bad Seeds. This is an injustice.

Admittedly, Simon Bonny does make records with the same southern American gothic post punk twang as the Bad Seeds. But Bonny is much more restrained than the theatrical and (almost) pantomime like Nick Cave. And the C&TCS back catalogue, although small, is much more solid and consistent than that of the Bad Seeds.

‘American Twilight’ is their first record in nearly twenty-five years (last one being 1990’s excellent ‘Paradise Discotheque’). And it could very well be the best thing that they’ve ever done.

Tribal drumming and some southern rock gone post punk guitar licks make up opener ‘Goddess.’ As a “We’re back” statement, it’s pleasant and gets you nodding your head. But when it segways into ‘My Love Takes Me There’, you sit up and take notice. A heavier guitar tone than what you’d normally associate with C&TCS, it’s a woozy, atmospheric number that sucks you in.

‘Riven Man’ is a swampy blues number along the lines of Gallon Drunk with plenty of groove and a short but utterly dreamy middle eight. ‘Domina’ is another dreamy, woozy number that Jason Pierce will be wishing he’d written. ‘The Colonel (Doesn’t Call Anymore)” haunts the listener with it’s sinister atmosphere, with vocals that are filled with despair.

‘Beyond Good and Evil’ is a stunning track. A country tinged ballad that wipes the floor with most efforts by Nick Cave, it lifts the listener to a higher place where all is right with the world. Bonny’s vocals are powerful and authentic, with hints of later Ian McCullough. One of the stand out tracks of 2013, no question.

A twenty-year layoff has done them the world of good. This is a fresh sounding and vital LP that never once threatens to descend into self parody (as quite a few comeback records do). Simply put, the songwriting and playing are top notch. And it sounds effortless. The bastards!

They’ll still be in the shadow of Cave, but ‘American Twilight’ will still feature quite prominently on many “best of 2013” lists. Sometimes, being overlooked can be a virtue.