David McCann – …and Sang To A Small Guitar 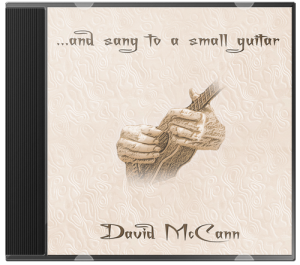 A gentle falsetto, sublime stories and fitting production; those are the first things that came to mind upon my listening completion of this record. I had a peek at David’s influence list prior to listening to a note of this release, and whilst I can hear some of the influences trickle into sections of sections; I firmly believe this release stands on its own original two legs.

Although this album is littered with beautiful acoustic finger picking that i could spend a paragraph praising, I find its real strength lies in the quality of the songwriting. There are eleven stories on offer here, all told to you via an acoustic guitar and a voicebox. Quirky lyrics keep the subject matter from retreading generic ground, whilst sequential storylines keep you focused throughout the songs.

I felt a constant Beatles vibe for the entire duration of this record – even in the production. There is even a song called ‘Don’t LET IT BE’ – which, although I doubt is a reference to the Beatles classic, my own strange correlation habits made me mention it in this review. The ‘stand out track’ to these ears is the marvellous ‘If Only for a Day’. Almost the central track of the release, it has a lot more energy than the rest of the record. It has handclaps, it has chanting chorus vocals and it reminds me of the Levellers at their best. ‘Spark’ has to get an honourable mention too though, with its lush finger picked acoustic guitar intro, female backing vocal and the line ‘If I don’t have you / Would I still be me?’ – Simple but effective.

I noticed that a lot of these songs were composed in 2005/2007, which leads me to believe that david has just dusted the cobwebs off an extensive collection of songs, and that we’ll be hearing a follow-up quite soon – and i’m happy about that.

◀ STANDOUT ⁞ If Only For A Day ▶
◀ CONNECTION ⁞ Don McClean ▶

Saturday Night Gym Club – How To Build a Life Raft