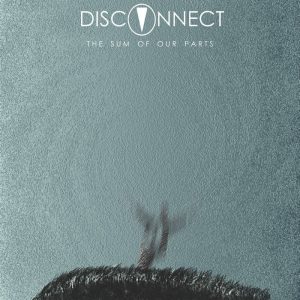 Belfast industrial duo Disconnect describe their sound as ‘New Age Catharsis’ – a description which told this prospective reviewer absolutely nothing prior to listening, and which was very nearly filed under an expansive list of ‘pretentious descriptions bands have used in bios’ as a result.

Still, we’ve all been raised better than to make knee-jerk reactions round here, and after a few successive listens, Disconnect display that they might well have had a point in choosing such a tenebrous description for their sound. The combination of bass and guitar with synthetic drum machines in the industrial genre is always going to draw easy comparison with luminaries such as Godflesh and (early) Pitchshifter, and it’s clear from the outset – once the metronomic introduction of ‘Embrace Eternal Poverty’ gives way to a simple but disorientating sludge riff – that this is very much the sandbox Disconnect are playing in. What’s striking is that the track goes as much for texture as it does for bombast, and when the guttural vocals eventually take front stage, they do so against a backdrop of white noise interspersed with the human strains of echoed monologues.

Following this, the chugging ‘Corpse Dragger’ drags corpses (sonically), with a toothsome sludge riff hitting overly-familiar beats that will please anyone just along for the noise, but contains some surprising breaks in form evoking some of the more melodious aspects of Type O Negative – and while the blastbeats won’t be for everyone, the song’s a great example of multiple offshoots from a single, simple idea. ’29’ injects some fluid hardcore groove into the mix, before changing tack in the middle eight and seeing out the duration with some dream-like synth and guitar interplay – more rolling waves than riffs and wails. It’s the first suggestion that Disconnect’s listening might have gone beyond the Godflesh back catalogue and into Justin Broadrick’s Jesu offerings as well: ‘Turn Against Them’ confirms this, sounding in many ways a mash-up of the two. To display influence and not tribute can be a difficult line to walk, and whilst it’s not entirely true that Disconnect avoid this pitfall on this track, the gradual focus towards the electronic almost saves it before things go full circle – and whilst the eventual return to heaviness yields some nice riffs, they’d have been better served as the nucleus of another song.

‘Abuseless’ probably sees the duo at their most flat-out and heavy, and at this point, it’s unfortunate that they choose to rely so….errrr…heavily on this approach, given that they’ve displayed some interesting ideas prior to it which could have been further explored. ‘Severance’ piles on some black metal influences, but the bludgeon is numbing, the song only really paying off (in pretty fine fashion, it has to be said) with the more textured, shoegaze tendencies it displays from the halfway point. ‘Paths To Transcendence’ does run with this baton somewhat, with some languid bass work and echoed vocals providing respite, as some major-key guitar work lifts the listener out of the mire. Whilst it’s not as completely meditative as the title suggests due to layered thrash-metal percussion throughout, maybe the ‘disconnect’ is the point.

Closing track ‘The Sum Of Our Parts’ sees the band once again lock into a Godflesh groove, with added elements of Killing Joke, and though it might be tempting to read this review thinking that Disconnect cherry-pick from their influences, the truth is that their chosen genre invites easy comparison, and ultimately the expanse they evoke isn’t something that could be easily done by copyists. It’s possible for the listener to cherry-pick from the band however, and some might well be satisfied with the sturm und drang of relentless riffing, but Disconnect offer tantalising glimpses of what their sound could be were the numerous strands tied together more cohesively: again though, maybe the disconnect is the point.