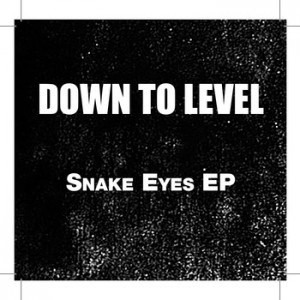 When we reviewed Down To Level’s debut EP, we had to speak about it somewhat retrospectively.  By the time we were writing, Bounce was over six months old and the band’s sound was beginning to develop excitingly beyond that recorded material. This time around, we were ready. Snake Eyes, Down To Level’s second EP is still relatively fresh, having only been released at the beginning of March. The latest four tracks reflect clearly how hard this band has been working on honing their sound. Snake Eyes is evidence that that work has paid off.

Title track ‘Snake Eyes’ is dripping with attitude. The introductory driving guitar riff grounds the track, giving it a rock ‘n’ roll sound while the second guitar builds momentum with expertly manipulated feedback. This is a technically sophisticated track. At points the vocals follow the rhythmical progression of the song in what makes for wondrous listening. With sparsely dealt delay ‘Snake Eyes’ sounds like one which could easily fill a stadium. Indeed as the two guitars intertwine with both Stephen Cassidy’s vocals and each other, there’s nothing to suggest it someday won’t.

‘Snake Eyes’ flows into second track ‘Never Going Back’ subtly. While this is only a small detail it makes the EP sound as a whole collection rather than a series of random songs. Again, this one has a big sound. It showcases a range of musical talents as guitarist Gavin Kennedy unleashes what sounds like a hybrid of sweep picking and hammer on techniques while drummer Jamie Loughran tightly controls the overall tempos. High pitched guitar tones give way to full sounding rhythms which in turn give way to slide-note laden riffs. There is a lot going on in this track but it is all carefully and successfully balanced.

While the first two tracks may have sounded like full on stadium rock, ‘Chains’ has a more blues inspired vibe. With sophisticated triplets on the lead guitar, it has a Thin Lizzy feel in parts. But then again, later the track can be reminiscent of Iron Maiden and even Fall Out Boy. This diversity is mirrored in the vocal ranges explored throughout the song. However, perhaps surprisingly, ‘Chains’ works exceedingly well. Rather than feeling like a messy clash of sounds, it blends together to create something unique to Down To Level.

‘Hero’, the final track on Snake Eyes is lyrically impressive. Complete with reference to Superman’s weakness, Kryptonite, it could easily appear on the next superhero blockbuster soundtrack. While it has all the hallmarks of what could be an aggressive hard rock song, it is actually quite uplifting. Here the drumming becomes a real focal point as Loughran works the hi hat. This is why Down To Level are such a great band; they are not afraid to shift the focus from one musician to the other. While Kennedy and Chris Byrne undeniably have the skills to make this an indulgent guitar rock band, they do not need ten minute solos to highlight their talents.

Overall, Snake Eyes is an extraordinarily measured and professional follow up EP to 2014’s Bounce. It sees Down To Level grow as a band, pushing themselves forward. They have managed to hone in their own sound and tighten up their musical abilities. As a result they have created four excellent rock songs which promise more exciting things for this band’s future.

Ruairi and the Owls – Man About A Dog