by Andrew Fearon
in Music Reviews 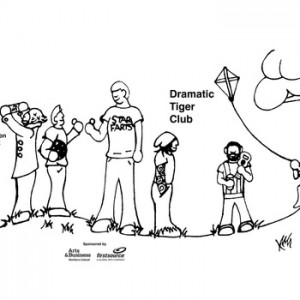 I’ve never been one to be averse to spoken word. I’ll confess that I have more than one album by William Shatner and I’ve found myself listening to Richard E. Grant and Orpheus’ single To Be or Not To Be more times than is healthy for anyone who has ears.  Thus when offered up the opportunity to review a spoken word E.P. I jumped at the chance.

The E.P in question is Big Children, Little Adults by Dramatic Tiger Club billed as a spoken word folk jazz fusion six piece from Derry. Certainly musically speaking it is something of a mashup of folk and jazz but with a heavy dash of muzak.  Muzak being the music you hear in the background of OKCupid or Facebook ads. It’s piano heavy, jaunty but above all inoffensive. There’s nothing really remarkable here musically, it’s bland and inoffensive, it’s something you could play your granny and have her say ‘oh that’s nice.’ There’s a couple of flourishes here and there that show Dramatic Tiger Club are certainly capable of something more, like the pleasantly ethereal backing vocals on ‘STF’ or the musical intro of Mortal Kompassion which has a certain offbeat charm.

Lyrically and vocally is naturally where a spoken word album would find its feet more and Dramatic Tiger Club are no exception. Nate McCartney is a fine spoken word artist with lyrics broaching serious subjects but often treated with a degree of humour and wry eye; his gruff tones make for an entertaining listen, that is until the chorus hits. The choruses suffer from the same blight as the backing music, they’re twee, clichéd and can throw you out of an otherwise listenable song. The worst offender is ‘Lout’ with lyrics such as ‘it feels nice to be nice’ being chanted like a darker intoned children’s sing-along. Other offenders include ‘Bad Breaks’ which is a song about coping with depression and yet comes off again as sounding like a sing-along you might hear at a Christian youth camp. Dramatic Tiger Club’s best offering probably comes in the form of Mortal Kompassion but that’s by virtue of being musically the most interesting piece and the chorus being the least obtrusive.

Certainly a good try to bring spoken word to a wider audience and I’m sure they have their fans as evidenced by the crowd they had at Stendhal Festival but this E.P falls flat.