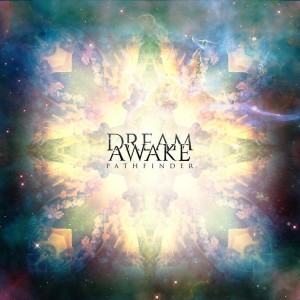 When Chordblossom first came across Lisburn youngsters Dream Awake in a support slot for the recent Making Monsters gig (which you can read about here) we were distinctly underwhelmed by the lack of connectivity and their rather desultory playing. To be fair, the appalling sound that was inflicted upon every band that night didn’t help, nor the fact that the band are only about a year old and are clearly still learning how to be a band. Nonetheless, it was with trepidation that we settled down to listen to Pathfinder, their debut EP released in August.

With the band describing themselves as ‘melodic post-hardcore’ (which, for the uninitiated, simply means ‘metalcore’) and the overarching theme of the EP as “based on finding the light in everything we do”, the EP starts promisingly enough with ‘Aurora’, a short intro tune of spacey guitars and crisp drums. “This is not a dream” are the only, whispered lyrics. Alright then…

Track two, ‘Tradewinds’, charges straight in with no pause, picking up on the deep, moody riff from the intro. The interplay between screaming vocalist (and bassist) Dave Houston and clean singer/guitarist Conor Kelly is good, if a tad generic. The structure of the song – metalcore with added dreamy touches – is catchy and earnest in a ‘teenage Kerrang! fans will love this’ kind of way.

‘Illuminate’ ups the floaty, dreamy feel, as well as adding some towering breakdowns, before stagnating slightly at the end, largely due to the rather grating repetitive lyrics. The title track follows, containing some excellent passionate bellowing from Houston – which unfortunately contrast rather unflatteringly with Kelly’s rather robotic, dispassionate clean vocals.

Final track ‘Departure’ tells, literally, of the departure of a loved one. It’s quite a soft, ethereal track, meaning the gang ‘woah woah’ vocals are a bit jarring. There’s also a recurrence of heavily repetitive lyrics here, too. A slightly lukewarm conclusion, it has to be said.

While we applaud Dream Awake‘s vision of combining metalcore with a more pensive, languid sound, in truth all it really does is snatch the heaviness from the ‘metal’ side for not much of a payout – a tiger with blunted claws, if you will. The boys also need to come up with a lot more in the way of lyrics for their next release, as the oft-repeated choruses and couplets here become a bit annoying and cause the listener to disengage.

That said, there is definitely tantalising promise here, albeit promise that needs hard work to come to fruition. With youth and time on their side, hopefully that’s exactly what will happen.

Watch: Rews – Can You Feel It?