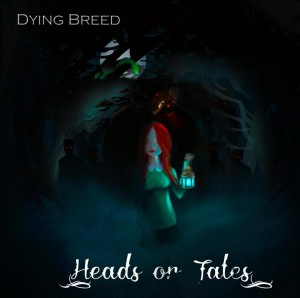 Limavady’s Dyingbreed have been working and gigging hard since the November 2011 release of their first EP ‘Don’t Follow the Rabbit’. The 3-track EP had an air of swaggering confidence, rare for a new band, with a sprawling prog-metal sound. The combination of singer James Moore’s distinctive voice, clever time changes and chugging beats made for a tasty batch of songs that left the listener hungry for more…

And so to EP number two, the niftily titled ‘Heads or Tales’. Though this time there is 4 songs, they are shorter and slightly less prog-influenced, resulting in a tighter sound which is nevertheless still recognisable as Dyingbreed.

Opening track ‘Snake Army’ kicks proceedings off with a bang, immediately launching into a huge, chugging beat and Moore’s impassioned roars and snarls. “It’s everyone for themselves!” he spits over some choppy, adventurous drumming. The inventive time changes are still present, along with deeper toned and somewhat more venomous vocals. Second track ‘Talk to the Wolf’ continues this angry theme, with some staccato vocals rich in tone and variety. Again, the song structure is clever and very catchy.

Death to the Tides’ is next, sounding vaguely like a souped-up, pissed-off version of Yes’ ‘Owner of a Lonely Heart’. It has a thrashier sound than anything so far, with a pleasing mix of deep and clean vocals. The bass and drums marry up brilliantly on this track in particular, creating a dense, lush sound. And the jazz-influenced bridge is a pleasant surprise, resulting in the most varied song on the EP.

Final track ‘City of Gold’, with its widdling guitar intro, ebbs and flows between hardcore, grunge and prog, neatly summing up the band’s influences. The long, drawn out, snarling roar from Moore is a particular highlight! This song is the closest link to the bands earlier, prog-tinged EP, with the added ingredient of a touch of pugnacity, the ‘sting in the tail’ that gives the entire EP a boost and lifts it above and beyond ‘Rabbit’.

Dyingbreed are clearly a talented bunch. This EP gives all four band members the chance to shine; no-one is drowned out or reduced to mere background noise. The songs here may be shorter and tighter but they still display the variety and originality that was evident on the first EP. The band are an invigorating mix of grunge, metal and grandness (think Queen meets Alice in Chains and jamming with The Dillinger Escape Plan). Their secret weapon is the extraordinary Moore, whose vocals slide effortlessly from scream to clean, roar to croon, all the while sounding emotionally charged and quite magnificent. Best of all, Dyingbreed are one of those bands that sound better live, so grab a copy of this EP, commit the words to memory and catch these guys at a gig ASAP.

The Hard Chargers – ‘Fine And Filthy’