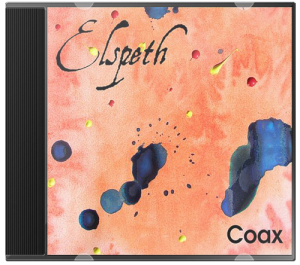 As the name Elspeth is more readily given as a girl’s name, this Newry based 5 piece oozes anything but femininity with their first album Coax, out earlier this year. Having gained substantial amount of air time over the past year on regional radio, including a live session on BBC Radio Ulster’s Across the Line, and playing notable support slots to the likes of Sea Of Bees and our own Cashier No 9, these guys know what they are doing.

The 11 track album, which was put out by Northern Ireland’s No Dancing Records, kicks straight into a gritty, guitar filled arrangement, met by Thom Yorke style vocals. ‘Think Back’ is a great starter track and sets up the mood for the album perfectly, layered vocals adding even more dimension to their already packed out sound.

’24 Hour Paramedic’ greets us with distorted, Arctic Monkey style riff lines. This track starts off promising, paying homage to their prog-rock side, but the chorus is a slight let down as Gerard Sands’ vocals sound quite forced, returning to a more welcoming tone throughout the verses. Besides the 90’s post- grunge sound this album is giving off, one of the most noticeable elements is the solid foundation provided by the rhythm section. Prominent bass lines are a key feature, along with Phil Corrigan’s flawless drum beats. ‘Quick Exit’ shows that these guys aren’t just a one trick pony as they turn in a slower direction, introducing gentle picking of the acoustic guitar. This track gives off vibes of Coldplay in their Parachute era, along with seemingly borrowed guitar lines from Sound Garden, not shedding their gritty sound completely.

It comes as a bit of a surprise when electronic drum beats introduce themselves mid album, swapping their guitars for synth and piano. It was only for Sands’ recognisable vocals assuring us we were still listening to the indie – rock act we had been previously. ‘Mob Journals’ is a complete change in direction for the lads, and while it’s not bad, it’s a little out of place and interrupts the flow of the album. That being said, no one can accuse them of being “samey”. The album soon claims itself back, ‘song for Goodbyes’ picking up where ‘Quick exit’ left off, offering an echoed acoustic opening to track six. Sands’ Falsetto vocals wrap around the gentle string picking, complimented by ghostly backing melodies, making this track their most haunting feature.

In the latter half of the record we have ‘JBT’. If Jeff Buckley and Radiohead had ever had a love child, this would be the result (and the irony that Buckley’s initials appear in the track title isn’t lost either). It guides us in with its nod towards Buckley’s famous cover of ‘Hallelujah’, and it is characteristic of their general sound.

Instrumentally this album is stunning in parts, it is clear that we have a bunch of talented lads that have found their voice. With the only criticism being that, although the vocal range does set them apart, it would do well for them to stay within their limits. Sands’ voice can appear a little strained at points, sounding within his best range in ‘Soap opera’ and ‘Song for Goodbyes’. Over all this is a well put together album, and not only on a local scale. Elspeth touch base with a number of genres within the record, sometimes lending from one to another within the same song. On one hand they provide grainy, layered guitar and on the other they have a gentle, rainy-night-in sound, leaving them most suitably under the prog-rock umbrella. They have managed to create a lot of atmosphere, and have varied it enough to keep it interesting.