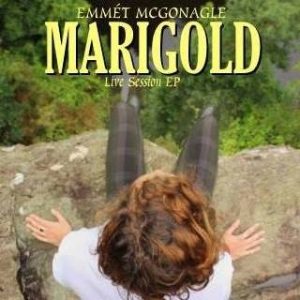 I know I have mentioned this more than once, but I think it’s important for the artists I review, to be reminded that I have sung in bands for much longer than I have been writing about them. And the reason I write about music is to promote the better artists, to encourage the newer artists, but also to give, I hope, constructive criticism where I think it is necessary. I am not out to make a name for myself either by sucking up to artists or, conversely, by being a poison-penned hatchet man. I hope young Limavady native, Emmet McGonagle, understands that as I critique his work.

My first caution is that the singer-songwriter genre (if there is such a thing) is a very, very, crowded marketplace, locally, nationally and internationally. It’s a good gig in that, overheads are lower than being in a band, you don’t have to deal with intra-band politics and you can usually get regular work; be it only playing in a corner of  a local bar for a few pounds and a couple of beers and, as long as your throw them the bone of some well chosen covers, the punters will let you get away with playing some of your own tunes. But, if you want to get beyond that stage you have to be seriously good and have something seriously interesting to say. Your music also needs to be well recorded and produced (even demos) or your music will not be noticed – or worse, noticed for the wrong reason and your reputation damaged.

My second caution is that releasing your live work is a double-edged sword. It is great if it shows you off to the best of your abilities; something that people will hear and say ‘I must go and see them if I get the chance’. But, if it isn’t your best work, if it doesn’t show you off in your best light, then you need to be very, very sure that you wish to be judged on it before you send it out to the likes of the press, radio etc. In addition, not everyone will even notice the words ‘live session’ on the cover, or even understand what that means as opposed to a controlled studio session with multiple takes and assorted studio ‘fixes’. Some people will just judge it against studio releases: dangerous to anyone’s career. There’s nothing wrong with a few live videos on youtube; people tend to understand what ‘live’ means in that context. But to promote something that people may buy, put into their cd/mp3 player and listen to, warts n all? That’s a big risk.

It’s not that Emmet does not have talent. I like his voice, though it is not show-stoppingly wonderful. His lyrics are better than average and that is where I hold out hope for him going forward; he is young after all. I like a lot about his songs, as I like melancholy more than most people, but there is nothing that stopped me dead in my tracks or got under my skin. Well, not in a good way.

In fact, the only thing that got under my skin is the guitar sound. I have to say, whether deliberate or accidental, the guitar sound in the opening song, ‘Nothing New’ is really off-putting from the first bars. It sounds out of tune. Even with me being a vocals man, it becomes all I can hear. I persisted with listening to the rest of ‘Marigold’, hoping that perhaps, the guitar sound was a stylistic thing for that one song (or a one-off aberration). But no. It persists through the entire E.P. and, I am sorry to say, made it very hard to listen to all the way through and didn’t make me want to go back and listen to it all again – not when I have other artists’ material to listen to (though I did listen to it more than once). I hesitate to say that phrase, because it is one of the most damning criticisms anyone can make of an artist, to say ‘one listen was enough’. But, it was.

If it is any comfort, an old band I once sang in had a review (in a national publication), which said ‘they would be a great band if the singer could learn to sing as well as the band can play’ (yeah, ouch). But, the important word was ‘learn’. It wasn’t saying I was hopeless and I am not saying all is lost for McGonagle. He can play (though it can improve), he has an ear for melody, he isn’t without lyrical talent and, as I said, he has a nice voice. Not only that but he is a fine looking lad, which doesn’t do any harm (and isn’t a string I had to my bow). But the bottom line is, I think he has made a mistake releasing this E.P.

Perhaps Emmet didn’t want ‘Marigold’, especially with it being a live session, to be held up to the standard of even locally established artists, so perhaps I have been unnecessarily harsh. I know too that the E.P. format has become essentially what used to be called a demo tape for a lot of fledgling artists. But, I automatically judge everything that comes into my inbox against what is expected of anyone wanting to make a name for themselves locally and, unfortunately, ‘Marigold’ does not stack up against what is already out there.

So, like I had to do with that recording that I was so criticised for back in my early days, Emmet McGonagle may have to consign ‘Marigold’ to that file marked ‘learning curve’.

Scratch My Progress Class of 2016 Launch