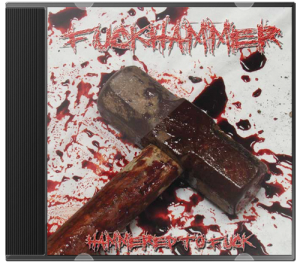 A name that generates “MIND = BLOWN” comments on message boards is always a good start. And a cover that straddles a fine line between starkness and stupidity gets a thumb up from me. Essentially War Iron with a different drummer, Fuckhammer have been on the go since last November. Described as “mid tempo stoner sludge” they are a much meatier and (dare I say it) punkier proposition than the nihilistic doom of the Iron.

Starting off with twenty seconds of tapping, the sheer grooviness of ‘Born of the Ass’ knocks you for six and the head begins to bang. Elements of Weedeater and Buzzov•en are evident in the riffing, but since when was that a bad thing? You can feel the disgust in Baggy’s vocals, which leap out and assault you in ways previously thought of as unimaginable.

Don’t expect a breather, as ‘Drone’ immediately kicks in. A state of the nation address, the somewhat cyclical riffage matches the lyrical content, where ‘day in and day out you’re beaten and you’re broken.” The sudden rush of Johnny’s drums at the end signify that it is up to the listener to escape, and now is the time to take action.

“Hillbilly – fucking useless fucker…inbred – thick as fuck.” Doesn’t take a rocket scientist to work out what this is about, does it? The combination of the lyrics, vocals and Sabbath/Orange Goblinesque riffs make ‘Hillbilly’ filthier than a junkie’s arsecrack. I imagine they mean “spide” but Baggy’s got the anti-spide metal market cornered with Lesshelp so I’d imagine he wanted to approach the topic from a more worldwide point of view.

By far the longest track on here, ‘Abortion Addict’ can be a punishing listen for the untrained ear. But it’s a track that works much better live. On record it’s a bit flat, lacking the vitriol evident throughout ‘Hammered to Fuck.’ It may be a slightly disappointing end to the EP, but trust me, it kills when played live.

That, ultimately, is the downside here: the production doesn’t capture the sludginess of their live shows, where you could lose yourself in some of those riffs. On its own, the EP is a solid, and at times spectacular, introduction to Fuckhammer. But the next one will be the real test whether the “MIND = BLOWN” comments on message boards will continue.